The Serpent in the Bible, Reality or Fairytale, Brutal for Humans? 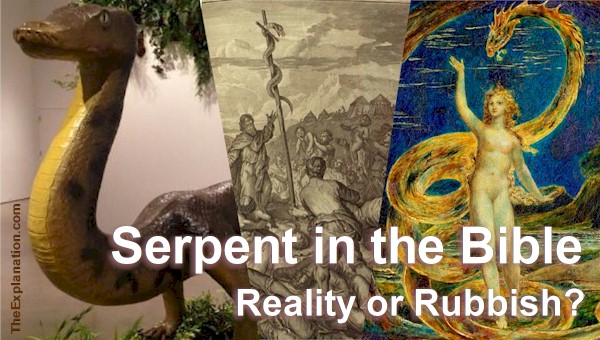 The Serpent in the Bible is the Devil. How real is this idea? Can one evil invisible being be responsible for all the wrongs on Earth?

The serpent in the Bible-Reality of Rubbish. Whether you believe it or think it’s a fairytale, it’s worth knowing what the Biblical Hebrew has to say.

Before we discuss the Serpent in the Bible, let’s recap our last episode, we’ve expounded God’s goal, represented by the 7th day of creation week, as one of the key pieces around which other pieces fall into place and the framework into which the numerous pieces fit. There are additional master puzzle pieces that most readers are fully aware of, but which, like the Sabbath, have been so misrepresented as to have been wrenched from their proper positions in the puzzle and twisted into misshapen, unrecognizable blobs of misinformation.
(Origin of the Universe, chapter 5.5)

We have already turned some of those pieces—like the role of the mind  (Audit of Humankind, chapter 3) and the family  (Audit of Humankind, chapter 6)—right side up in Inventory and Audit. In due time we’ll take off more of their rough edges and fit them into their rightful positions. Right now, we are seeing the underpinnings of what and why things are happening on Earth as they do.

Once you begin to get a general outline of the mainstays of the overall picture of The Explanation, many details will come more clearly into focus. For now, let’s pursue the Serpent in the Bible and his goal, not literally, of course, as you’ll see in due course!

For now, let’s ask the audience, Why do we have such a messy Earth?

Here’s a clue: I just wrote that the Sabbath and other master pieces had been wrenched from their proper positions in the puzzle and twisted into misshapen, unrecognizable blobs of misinformation.

Galacti has downright negative feelings about this statement; this is a grave accusation. On his vaguely human features, Galacti has an expression of puzzlement. Can I honestly be saying that there are certain aspects of living of which the average person, as well as scientists, philosophers, government and religious leaders, are ignorant? How dare I say this is a worldwide phenomenon?

“Can that be?” Galacti isn’t sure to whom he is speaking. He’s avoiding me for the moment. “Investigative detectives and reporters, with the best curious minds, are digging up the dirt behind the scenes and have set themselves the task of revealing the truth. They print the most pertinent headlines; how can the author state that we’re propounding unrecognizable blobs of misinformation? That’s some bad hat, Harry!” Galacti quotes a line from the end credits of the TV show House and the film Jaws.

Let’s take a moment to explain, since—for this journey, we have all the time in the world.

We’ve already touched on this somber point when presenting the personage, the Serpent in the Bible, with his subtle nature misquoting God’s words, taking them out of context. He deceives. He uses subterfuges to give Eve and Adam the ego boost to believe they possess the ability to gather all knowledge, to understand all the information, and then handle all dilemmas of and by themselves. He molds their minds to his fatally distorted point of view. I didn’t choose the adverb fatally without reason. The Serpent’s way is fatal; it leads to the same result as eating of the Tree of Good and Evil: death.

The Serpent’s goal is simple. It is the opposite of God who wants humanity WITH Him. The Serpent in the Bible has one and only one objective in mind: Stop humans from being WITH God, to separate humanity from their Creator, to erect a barrier between God and humankind.

The Serpent’s goal is simple. It is the opposite of God who wants man WITH Him. The Serpent has one and only one objective in mind: Stop humans from being WITH God, to separate humanity from their Creator Click To Tweet

The Serpent in the Bible is ready to pull out all stops to attain his purpose. We will see many of the subterfuge methods he uses, camouflage, smokescreens, facades; you name it, he’s mastered that maneuver and transformed it into a formidable arm against humankind.

At this point, some readers are thinking; Sam’s lost it. First of all, this talk about a serpent-devil is a lot of unproven hogwash. And to think there’s some invisible evil force out there influencing humankind is at least laughable, and at most the biggest fairytale ever perpetrated on humanity. Well, if you feel that way, OK, take it as some legendary make-believe cartoon to sell books.

I want to remind you that the Bible mentions the Serpent—as it does God—and for now I’m just explaining what the Bible says. I’m not asking you to change your beliefs, no matter what they are. You started reading this because you want a better understanding of the Bible. You want to see what that book says in its original language, Biblical Hebrew.

Even Galacti is beginning to think I’m exaggerating the hatred the Serpent has for humankind. If it were so rampant, so vile, despicable, and foul, surely we roving investigative reporters, along with the combined brains on our planet, would’ve gotten some insight into the character of things. Could the Serpent have mastered the art of exploitation, making wicked appear good, enticing us to delude ourselves?

Did the Serpent reach his goal with Adam and Eve?  The Serpent is not just a cartoon villain. There is a method and even a human motive. He knew what would happen the moment Adam and Eve ate of the Tree of Good and Evil. He desired a specific outcome, and he got it.

After eating of the Tree of Good and Evil, Adam and Eve then tried to hide from God in His garden (Gen 3:8). The couple somehow reasoned that by concealing themselves behind some rocks or trees, they could WITHDRAW from God’s presence—hiding in their room with the door closed, as it were. They tried to flee the scene, not the other way round. God was still in the Garden, but humans cut contact with his Creator. God didn’t just go off by Himself and abandon them. They hid out from Him; this is what the Serpent in the Bible wanted from the beginning.

We realize that God did put Adam and Eve out of the Garden, and He even put guards at the entrance to stop humans coming back. On the other hand, the Serpent in the Bible pulled off his coup. God’s ousted humankind from His Garden. The Serpent scores.

God is boring, or so the Serpent says onstage. God is a bully and an authoritarian, and why does humanity have to do what He says, anyway? Now that he is partially exposed, the Serpent in the Bible resorts to character assassination, pointing out that God couldn’t even maintain Adam and Eve in the most pleasant place on earth.

God is a bully and an authoritarian, why does humanity have to follow Him, anyway? The Serpent resorts to character assassination: God couldn’t even keep Adam and Eve in the most pleasant place on earth. Click To Tweet

This blog post is an excerpt from chapter 5.5 of Origin of the Universe

Since you read all the way to here… you liked it. Please use the Social Network links just below to share this information from The Explanation, The Serpent in the Bible, Reality or Fairytale, Brutal for Humans?