The Serpent in the Bible, our 3rd Character Enters 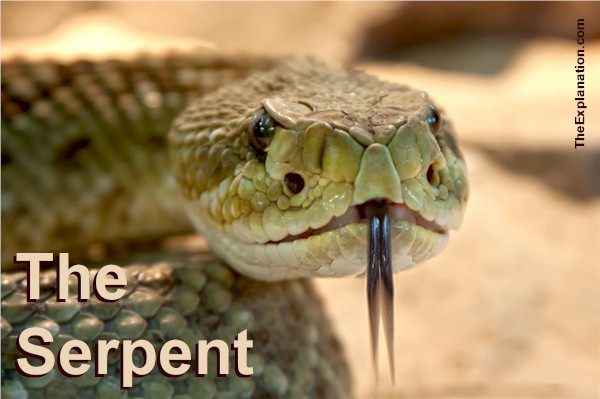 The Serpent in the Bible, also known as the Devil or Satan, is one of the biggest ‘myths’ of all times: Does he exist? Were Adam and Eve so boring that God had to create the Devil to compensate?

The Serpent in the Bible. Down through history, he is presented at the arch-enemy of God, as a fallen angel due to his vanity. But at the same time, a highly intelligent and creative being.

Scene 4: The Serpent in the Bible makes his grand entry (3rd character)

I’m still presenting the main characters of the Bible story. After God and humans which we discussed in the last couple of blog posts comes the Serpent in the Bible, also known as the Devil or Satan
(Origin of the Universe, chapter 4.5)

For now, see how, in the script, the serpent appears on the scene in discussion with Eve. A plot wouldn’t be a plot without the bad guy making his entrance and stirring up problems. The Serpent must have some attraction and appeal and can hold our attention. After all, this slithering creature has central roles in literature from the 17th century Paradise Lost to the 21st century Harry Potter.

Eve has made her entrance, and the Serpent in the Bible has ‘crashed’ the couple’s private time. They are fascinated with each other, but this new being has appeared, and they greet him in all naivety. They are full of curiosity as to what he is.

And the Serpent in the Bible said to the woman; you shall not surely die: For God knows that in the day you eat thereof, then your eyes shall be opened, and you shall be as gods, knowing good and evil. And when the woman saw that the tree was good for food and that it was pleasant to the eyes, and a tree to be desired to make one wise… (Genesis 3:1-6)

Who is this Serpent, and what does his appearance mean? How does he go about achieving his goal, and what is his game anyway? We’re still introducing the characters of our play. So we’re not going to discuss some pointed questions here, such as: If God is good, where did this evil character originate? Why does good God allow the devious Serpent in the Bible such freedom of movement and action? How can honorable God seemingly ‘overlook’ the havoc wrought on frail man by this imposing, appalling powerhouse? We will broach all these points after Scene 5, according to the script.

In the Bible story, who is this Serpent, and what does his appearance mean? Click To Tweet

What does it mean when the Bible story says, the serpent was more subtle than the other animals? Click To Tweet The Serpent entices Adam and Eve by making them feel more important than what they are: you shall be as gods. He tells them what the potion is: ...a tree to be desired to make one wise. We shall often return to this wisdom because… Click To Tweet

In this unbeatable promotional sales proposal by the Serpent in the Bible, we’ve covered an awful lot of ground. We’ve gone from 0 to 100 km/hour in less than a wink. We shall take time to expand and corroborate these points. But again, for now, we are exploring the individual character traits of our performers.

Before we move on to the next scene, there’s an essential point to make.

Why didn't God strike the Serpent dumb? He could've prevented the Serpent of the Bible from entering the Garden of Eden, but He didn't. Click To Tweet

Was God away on vacation, or sleeping, or involved with some other activity—so much so that the Serpent of the Bible penetrated all the defenses and alarms God had set up to protect Adam and Eve from this monstrous inducement? No, no, no.

Had an all-powerful God wanted the Serpent drawn and quartered, banned from the scene, it was totally in His power to do so just as a King can dispose of his advisers, subjects or enemies anyway he wishes to.

From this scene, we must draw a couple of conclusions about whether our story is fictional or not:

The Serpent in the Bible can entice humans into thinking they’re more important than they are–otherwise known as wrapped up in their own wisdom or vanity. He can allure humans into developing a very fertile imagination and vision as to how to gain their own wisdom through philosophy, science, religion, and government. Then govern themselves and this world, trying to engineer peace and harmony—how to run their own affairs their own way according to their own principles — establishing their own laws based on their own reasoning.

These ideas sound noble, and if God has given humans free will to choose, doesn’t that suggest that the Serpent’s will, as opposed to God’s organization, is equally valid? You may be surprised at the answer—we’re keeping you in suspense.

Understanding this one scene in the story and the way the Bible portrays it lets you grasp the frame of mind the Serpent in the Bible has foisted on this world, coupled with the realization that God is allowing this to happen.

Galacti fields a question from the home audience: Why has God allowed the Serpent in the Bible to do this?

I will answer that all-important question too, suffice to say—that if there’s any validity to this story—we now understand a little better why there’s a lot of turmoil on the face of our earth. We see why the incredible Inventory of the Universe is in such a mixed-up state as described in the book Audit of the Universe. The goal of Origin of the Universe (which you’re reading now) and Origin of Humankind is to explain the why. And especially where God is taking us now and how He’s going to get us there.

But, for now, patience please, and on to next week with more action.

This blog post is an excerpt from chapter 4.5 of Origin of the Universe.

Since you read all the way to here… you liked it. Please use the Social Network links just below to share this information from The Explanation, The Serpent in the Bible, our 3rd Character Enters