Vital Water Transports, Nourishes, and Cleanses all Our Life Needs 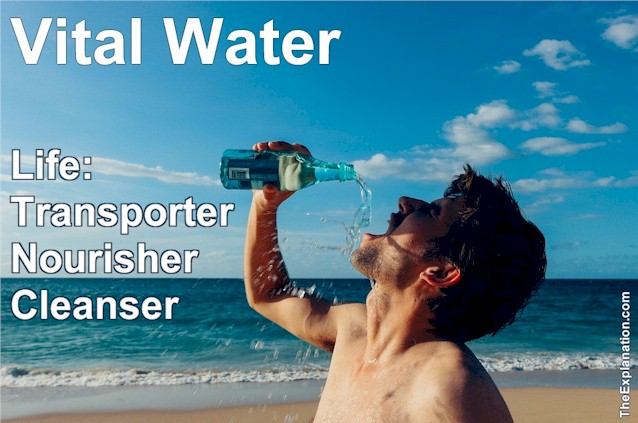 Vital water, be it salty or fresh, is basic to life. It is responsible for all the transportation, nourishment, and cleansing needs to maintain life on Earth. Vital water is responsible for all the transportation, nourishment, and cleansing needs to maintain life on Earth.

Our chef is not alone in his admiration of vital water. It is the only substance that goes through the three states of solid, liquid, and gas in a human-supportable range on the Celsius thermometer.
(Inventory of the Universe, chapter 3.4-5)

This is a range that zips between two extremes: zero and one hundred, freezing and boiling.

The evaporation of our planet’s vital water being absorbed by the ambient air—both in our coffee and above the clouds—is the ascending aspect of the water cycle, just as dew, fog, rain, and many other meteorological phenomena are the descending part of it.

This vital water goes through several different states between the ascension and descending phases.

Take the ice in those huge trays that provide the ice for our iced tea or the glaciers above us. Frozen, water becomes lighter and floats, as in our drink or in a snowflake. Its molecules expand and it takes up more space, as opposed to corn syrup.

If the icebergs in part of our vast restaurant aquarium were made of, say, frozen corn syrup, the polar bears, penguins, and seals populating that section would have no land ice to live on, as it would all sink under them. Or what if the 10,000 to 50,000 icebergs the Arctic produces in a year were made of milk: good to drink, but denser than freshwater? There’s a reason we have liquid water and frozen water.

We take water for granted despite the exhortation to drink eight glasses per day. Without thinking about it, and despite the fashionable bottled water we’re ordering and drinking, we accept that it is the vehicle for all of life’s processes: nourishing, transporting, and cleansing.

More than any other substance, water is essential for life and health. Both ocean water and freshwater contain trace nutrients we need, such as magnesium, potassium, zinc, manganese, and more, as we’ll see later on.

Water dissolves more compounds than any other fluid. We find the majority of salts, such as common table salt and its companion, rock salt, in the oceans. The most common element in freshwater is calcium carbonate, which forms that chalky white deposit on sinks and tableware. It’s the cause of hard water, but it also helps strengthen our bones.

Various other minerals like iron, which combats anaemia, and magnesium, which helps ease stress, are found and consumed in mineral water that is positive for our health.

This does not apply to living, organic things such as the everyday organic molecules in a pot of pasta or the tomato sauce cooking in the café kitchen. This is why vital water transports insoluble nutrients, such as simple carbohydrates from the pasta, throughout the body and into living cells through the semipermeable walls of our organs.

Water does double duty in the veins by cycling and circulating nutrients (iron, for example, from the vegetables in pasta sauce) throughout the body via the blood vessel network.

At a miniscule level, water is the waitperson delivering nutrients exactly where the body orders them. Critical elements like calcium, magnesium, and sodium from our ocean and groundwater are dissolved in the bloodstream, giving blood its salty taste. Blood carries oxygen and nutrients dissolved in water to all parts of the body.

Just as importantly, vital water acts as the waste disposal system by transporting CO2 and other biological waste from cells to the filtering organs (lungs) for evacuation. It also removes respiratory and digestive by-products such as carbon dioxide and uric acid.

In addition, both toxins and medicines that can dissolve in the water cycle, such as liver medications, can be moved through the circulatory system in a matter of moments.

Some of our diners have just joined us from a sporting event. Our champions perspire during their post-workout cooldown.

While they were performing their athletic feats, their collective sweat glands were releasing enough water and perspiration to make a deodorant company happy. The evaporation of this sweat uses energy—our extra heat—thus cooling us down. Our own water cycle involves many more sets of processes.

We leave the café after paying our bills. You can’t put a price on what we’ve consumed, but let’s just say $66 billion as a dollar amount, since this is the estimated price of all the bottled water sold worldwide in 2012. Even all of this vital water pales in comparison to the cube we saw at the beginning of this chapter.

As we leave the café, we stand on a brave new world. Terra firma has been leveled out on the Pacific, Atlantic, and Indian Ocean beds, but the saltwater sea rushes around us. We are in a protected spot on dry land that is zero to thirty meters above sea level.

We ask our tour guide how deep the water is. Galacti produces a giant measuring device and probes the depths. Our surrounding vital water is some 3,000 meters deep. That’s well over the height of a 1,000-story building. We contemplate the bulk and depth of seawater in a new way.

Some of the audience—learned people or trivia buffs—recite facts to make sense of our vital water.

“Did you know that 90 percent of the world’s volcanic activity occurs in the oceans? They are a source of the elements we’ve been hearing about: sulphur and minerals.”

Antarctica has as much freshwater in its ice as the Atlantic Ocean has salt water, and 10 percent of the Earth’s surface is covered with ice. Once the ice in the oceans melts, however, it mixes with the salty seawater.

Glaciers store about 75 percent of the world’s freshwater. They build up with snowfall, which turns to ice. Runoff comes in spring, just when vital water is needed most. The timing is just right for planting and harvesting. Galacti adds his trivia.

“What do a human brain and a chicken have in common?” he asks. “They are both composed of 75 percent water!”

Wherever we go and whatever we do, vital water plays a crucial role in and around our lives.

This post is an excerpt from chapter 3.4-5 of Inventory of the Universe.

Water is essentially everywhere in our world, and the average human is composed of between 55 and 60% water. Here are the roles of transport, nourishment and cleansing water plays in our bodies:

Since you read all the way to here… you liked it. Please use the Social Network links just below to share this information from The Explanation, Vital Water Transports, Nourishes, and Cleanses all Our Life Needs