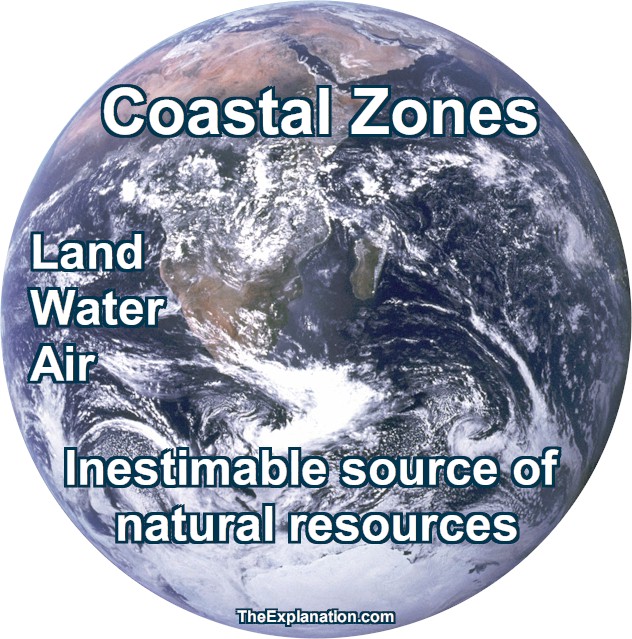 Coastal Zones occupy 20% of land surface and host 40% of the world’s population. They have some of the best natural resources available. Discover Their impact on Life. WATER: Covers 71% of the Earth’s surface; The Antarctic ice sheet contains 61% of all fresh water on Earth, LAND: In the image, see the coastal zones of Africa and the Middle East. AIR: Condensed atmospheric water can be seen as clouds,

Man has always sought out dwelling places close to water for convenience and pleasure. Coastal zones include low-lying areas of land next to the sea where land and sea activities interplay.
(Inventory of the Universe, chapter 3.6-7)

They cover up to one hundred kilometers inland and represent approximately 20 percent of the Earth’s surface, where they are home and workplace to around three billion people (40 percent of the world’s population).

Seventy-five percent of mega cities, a city with a population in excess of ten million, have been built here on all the continents. This highly concentrated zone of rich resources includes the continental shelf with its lavish fishing reserves, extending to a depth of 200 meters.

This is the meeting point of two of the three fundamental elements on Earth, one of which is stable (land), and one of which is in perpetual motion (water). When the third agitates (air), coastal land needs to take cover.

Its variety of ecosystems—coral reefs, mangroves, salt marshes, and outer islands—are not only protection for the mainland, but also a huge resource of natural products and vast diversities of flora and fauna. With the sun penetrating the shallow waters and making photosynthesis possible, the coastal zones teem with thousands of species of sea life living among each other.

Personally, overlooking the sea with the waves lapping against the shore is my favorite getaway for thinking and writing. Djerba and Hammamet in Tunisia, San Remo in Italy, Netanya in Israel, Hyeres in France, Surf City in the United States, and Hong Kong and Haikou in China, have been participants in this adventure, as well as their views over the Mediterranean Sea, the Atlantic Ocean, and the China Sea all the way to the horizon (often with stunning sunrises and sunsets). The coastal zones are breathtaking and inspiring.

I try to get away during the off-season, when you can walk along deserted beaches, wade barefoot in the incoming waves, and inhale the iodized air. The seaside is a refresher for the body and the mind.

Galacti puts it simply: “The sea is vastness, power, and magnificence.” Mount Everest and the Himalayas seem like pinpoints floating in the grandeur.

They are dwarfed by the Gakkel Ridge, which boastfully rises from the floor of the Arctic Ocean and stretches to a great length of 1,800 kilometers (1,100 miles)—four times longer than the Andes, Rockies, and Himalayas combined. Unlike Mount Everest, the ocean is not fully explored: humans have mapped less than 10 percent of the ocean.

As we take stock of our planet, realize that everything in the Ocean is majestic, from the massive Mid-Atlantic Ridge (the longest in the world at over 40 thousand kilometers, the circumference of the Earth) to the highest tides in the world in the Bay of Fundy (about fifteen meters, the height of a five-story building).

This coastal zones bay is Canada’s candidate for one of the seven wonders of the natural world. It is a body of water that separates Nova Scotia from New Brunswick. These are features that our audience sees, like holographic projections on water.

Coral reefs, a support system for 90 percent of marine organisms, glimmer in the water, asserting themselves as the largest living organism on Earth and visible from space.

We barely have time to examine—via the world’s most sensitive microscope, which Galacti has provided—the minutest phytoplankton that grow on the underside of an iceberg floating conveniently within our reach not far from the coastal zones.

It would be something to touch these phytoplankton because they represent the beginning of the oceanic food chain, which extends all the way up to the blue whale that swims just below us. Its length is an impressive twenty-three meters (seventy-five feet). Its heart is literally the size of an elephant.

The audience recognizes that we’re barely aware of the secrets of the ocean, even though 90 percent of the Southern Hemisphere is ocean water. The top three meters of the world’s oceans contain more heat than the entire atmosphere.

Like our blood, the ocean gets its salinity from elements: that smorgasbord of over sixty of the ninety-two known elements we find on Earth, from boron to titanium. It contains the heavy elements we spoke about in chapter 2, including an estimated twenty million tons of gold. That’s about three kilos of gold for each person on Earth.

The ocean can’t be measured in gold, however. This vast, deep body of water provides climate regulation, oxygen regeneration, and the most protein for humans around the world. Over half the world’s population (some 3.5 billion people), depends on the ocean as their primary source of food.

As our questioners have observed, the wonder of the oceans extends beyond its food supply. Their water teems with 250,000 named species, and scientists estimate there could actually be two million. New species come to light as minisubmarines plow the depths of the Marianas Trench, which makes the Grand Canyon look like a dollhouse.

We get to view these minisubmarines at work through a “sea-cam” that shows the progress of the sea mapping. The submarines’ specialized sensors show us a colorful watercolor painting representing some forces in play in the “sea-cycle” that the submarine encounters.

This post is an excerpt from chapter 3.6-7 of Inventory of the Universe.

Below are a couple of videos related to Coastal Zones. The first is very instructive and the second is about modern technology and its effect on the coastal zone in Dubai, a fascinating and instructive story of human prowess and the taming of nature.

Since you read all the way to here… you liked it. Please use the Social Network links just below to share this information from The Explanation, Coastal Zones, Home to Forty percent of World Population