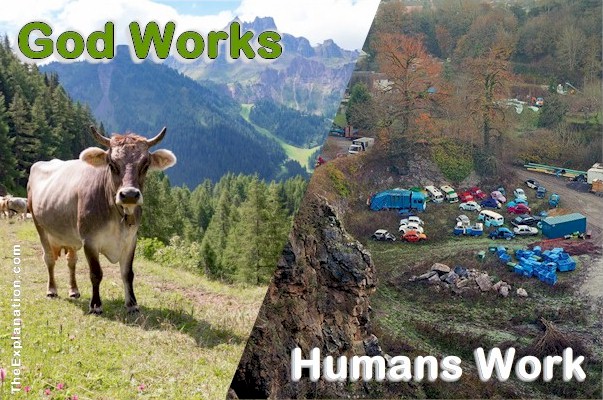 God works, what He does, and what humans do relate directly to Mind-Body Problem Solved. Science limits itself to WHAT the mind is, while psychology adds HOW the mind works. This book will address both of those issues, but it goes much deeper. WHERE consciousness and mind come from and especially WHY humans possess it. That’s why we have to delve into new territory like theology, God, how God works, humans in the image of God, and their work.
(Mind-Body Problem Solved, Chapter 11)

None of the classic approaches taken by science, philosophy, and religion have led to satisfactory and conclusive answers to all those queries. The Explanation involves an entirely different procedure. Theology, based on a deeper understanding of Biblical Hebrew words, mainly in the first chapters of Genesis. The first five minutes of the story, where God establishes His purpose for the creation of humankind. Many other contexts from both the Hebrew and Greek Scriptures, the Old and New Testaments, must corroborate God’s purpose.

The chapters of this book are not isolated bits of information, they build on each other. The proper definition of theology is what God says in His Word about Himself and His purpose. Two chapters ago, I pointed out that Elohim (plural) is composed of the Father and the Son. Yahveh, meaning eternal, refers to Jesus the Creator. In the last chapter, we saw the relationship between these God Beings as well as those who will join Them. God is one Family, now two; in the future, Jesus will add multitudes more. Many Scriptures confirm these Bible facts. You know them, unfortunately, most have overlooked the real meaning. Here’s Christ’s prayer, just prior to His Crucifixion.

1 These words spake Jesus, and lifted up his eyes to heaven, and said, Father, the hour is come; glorify your Son, that your Son also may glorify you:

3 And this is life eternal, that they might know you the only true God, and Jesus Christ, whom you have sent.

4 I have glorified you on the earth: I have finished the work which you gave me to do.

5 And now, O Father, glorify you me with your own self with the glory which I had with you before the world was. (Sam: The two God Beings BEFORE the Creation of this world. This is the one Family with two Beings.)

6 I have manifested your name to the men (Sam: a generic term including women) which you gave me out of the world: yours they were, and you gave them me; and they have kept your word. (Sam: Do you see how these two God Beings share everything? They have a common goal and it involves humankind.)

7 Now they have known that all things whatsoever you have given me are of you.

8 For I have given to them the words which you gave me; and they have received them, and have known surely that I came out from you, and they have believed that you did send me.

9 I pray for them: I pray not for the world, but for them which you have given me; for they are yours.

10 And all mine are yours, and yours are mine; and I am glorified in them. (Sam: full sharing between the Two Beings.)

11 And now I am no more in the world, but these are in the world, and I come to you. Holy Father, keep through your own name those whom you have given me, that they may be one, as we are.

Just as the chapters in this book are not isolated, so passages in the Bible are not isolated. Everything assembles. God works, illustrated by Christ worked (vs 4), creating spiritual humans, during His Ministry, Yahveh (the future Christ) worked in Genesis 1-2, creating physical humans and their environment, Earth.

This is God works. Most people don’t meditate on this subject. Think. We know of Jesus Christ’s total involvement in spiritual salvation with His Ministry 2000 years ago and since then in the individual lives of His people. Christ, God works over thousands of years. Who do you think worked with Adam? Abraham? Moses? David? Daniel? And all the other servants of God? Yahveh has always done Elohim’s work. “I have finished the work which you gave me to do.”

22 For as in Adam all die, even so in Christ shall all be made alive (Sam: all includes all the Old Testament servants with whom He worked).

23 But every man in his own order: Christ the firstfruits; afterward they that are Christ’s at his coming.

Please read details of God’s role at the links or in Origin of the Universe and Origin of Humankind.

Gen. 2:3 tells us “And God blessed the seventh day, and sanctified it: because that in it he had rested from all his work which God created and made.”

The translation of the end of this verse is somewhat ambiguous, created and made. Please read this article for a clearer view of how God works, and what the seventh day is all about. There is no space to cover this here. This has to do with Christ upbraiding the Pharisees about their view of what God works on the Sabbath day in Matthew 12:5-8.

5 Or have you not read in the law, how that on the sabbath days the priests in the temple profane the sabbath, and are blameless?

6 But I say to you, That in this place is one greater than the temple.

7 But if ye had known what this means, I will have mercy, and not sacrifice, you would not have condemned the guiltless.

8 For the Son of man is Lord even of the sabbath day.

Priests then, and pastors now, work on the Sabbath day. They bring God’s mercy to God’s people, just as God cultivated His relationship with the first two humans right after their Creation and brought them mercy. God works, that’s the essence of the story of the two Trees.

And the LORD God formed (H3335) man of the dust of the ground, and breathed into his nostrils the breath of life; and man became a living soul.

Bara Creation (H1254) refers to a God said achievement (Gen. 1). It’s instantaneous. Not so with formation, it involves time and other elements. Verify this at UnlockBibleMeaning.com.

יָצַר yâtsar yaw-tsar’; probably identical with H3334 (יָצַר) (through the squeezing into shape); (compare H3331 (יַצַע)); to mould into a form; especially as a potter; figuratively, to determine (i.e. form a resolution):

יָצַר yâtsar yaw-tsar’; a primitive root; to press (intransitive), i.e. be narrow; figuratively, be in distress:

KJV – be distressed, be narrow, be straitened (in straits), be vexed.

The potter has a purpose for a clump of clay. They fashion and form it by narrowing it down with their hands. It’s a time-consuming process equivalent to God as the Potter testing and challenging His servants to help them grow spiritually. “But now, O LORD, you are our father; we are the clay, and you our potter; and we all are the work of your hand” (Isaiah 64:8).

We are going to greatly deepen our understanding of God’s formation. This is where consciousness and mind come directly into play as we shall see.

But this episode is to show God works. Yahveh works in two major areas, ruling over His Creation and developing His relationship with His servants.

Keeping that in mind, remember God created humans in His image. Right after that Creation in Gen. 1:27, in the very next verse, He establishes the roles of the male and female, and hence, all of humankind.

And God blessed them, and God said to them, Be fruitful, and multiply, and replenish the earth, and subdue it: and have dominion over the fish of the sea, and over the fowl of the air, and over every living thing that moves upon the earth.

Do you see that what God does (relationships and rulership) is exactly what humans are expected to do?

The world population has a huge lack of formation in social arts and government. Most national rulers have not been formed to govern. Is it any wonder families and nations are struggling? Audit of Humankind addresses this issue. How are we doing? Is the glass half full or half empty? What’s the tendency?

God works and is specially equipped to do so. His Creation, humans, in His image, do the same works, therefore God has equipped them physically and mentally, so they’re capable of doing just that. Consciousness and mind have a direct bearing on how God works and how humans in His image work.

Since you read all the way to here… you liked it. Please use the Social Network links just below to share this information from The Explanation, God Works & Humans Work. We Create Family & Rule Earth