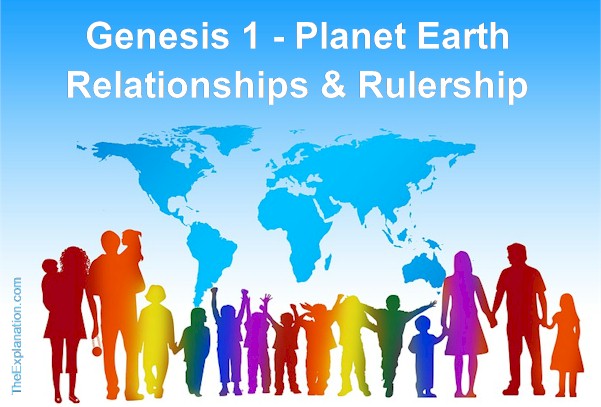 Genesis 1 unlocks our understanding of the world today. It reveals the critical issues of human social relationships and rulership.

Genesis 1 is all about planet Earth, human relations, and the rulership of our environment.

Genesis 1 divulges the basis of human existence on Earth. The origin of humankind. Our characteristics as well as our goals of human social relationships and rulership of this planet.
(Origin of Humankind, chapter 2.2)

If you’ve come across this blog post for the first time, then please know that it is part of more extensive work. To see the entire context, which you can read online, click here.
You can follow along by using the online Bible, the Interlinear Bible, Strong’s Concordance and the Hebrew/Greek Concordance at UnlockBibleMeaning.com
To understand how I’m using Biblical Hebrew, read this short presentation of 7 keys to Master Biblical Hebrew
Dig for Bible Study gems to enhance your understanding: See ‘Further Study’ suggestions at the end of this blog post.
Galacti is our fictitious time-traveling, investigative, roving reporter who lends his insights and voice to the development of the narrative
Genesis 1 is a full summary of God’s physical Creation, from heavens to humans. He has also revealed to us THE two major themes of the entire Bible in Genesis 1:26-28; this continues through verse 31, the end of the chapter, as we shall see.

These two injunctions in Genesis, given to humankind by God, are the subjects of chapters 12 and 13 of the book Audit of the Universe (chapter 12 almost completed, 13 is coming next). To remind us of the Bible context we’re investigating, Genesis 1 consists of the broadest of brush strokes to paint the entire scenario of the story that is about to take place on Earth.

Humans are at the pinnacle of this story. They dominate the fauna which has all the flora at their disposal as the final three verses of Genesis 1 indicate.

29 And God said, Behold, I have given you every herb bearing seed, which is upon the face of all the earth, and every tree, in the which is the fruit of a tree yielding seed; to you it shall be for meat (H402).

30 And to every beast of the Earth, and to every fowl of the air, and to every thing that creeps upon the earth, wherein there is life, I have given every green herb for meat (H402): and it was so.

31 And God saw every thing that he had made, and, behold, it was very good. And the evening and the morning were the sixth day.

These verses essentially tell us what God gave humans and living creatures to eat. Verse 30 says the animals only get green herb.

On the other hand, verse 29, humans get herbs and trees that yield or bear (H2232) seed (H2233) after its kind; this is a direct reference and repetition of the vocabulary of Genesis 1:11-12 on the third day of Creation. Notice that in Hebrew yield and seed are the same word referring to the constant renewing, regrowth of this vegetation.

Humans have always been involved in agriculture, and seeds are of utmost importance. The seed for crops has become a huge controversy today. I don’t want to get into it here, but look up hybrid seed and genetically modified seed. It has produced huge gains in productivity over the past 50 years but is expensive to produce and is patented mainly by Monsanto. The latter has a corner on the seed and herbicide market. The situation arises where plants from this modified seed do NOT yield seed after their kind. The plants are sterile, forcing farmers to buy new seeds each year. In poorer countries, farmers cannot afford this and are being pushed off their land.

Genesis 1:29-30 uses old English for meat (H402) to refer to the food humans and animals were given to eat. Mastering Biblical Hebrew unlocks deeper Bible meaning of the Biblical Hebrew for eat. See what I mean.

Please read Further Study below to see that H402 can be used figuratively, as is the case in Ezekiel 35.12. “And you shall know that I am the LORD, and that I have heard all your blasphemies which you have spoken against the mountains of Israel, saying, They are laid desolate, they are given us to consume (H402).” The inference is destruction.

God gave humans both seed-producing vegetation and the ability to produce their food through gardening and agriculture. In the context of Audit of the Universe, ask yourself what we’ve done with this ability. The word consume reminds me of the concept of our consumer society. That’s what we’ve become. We’re eating up our earthly, mineral, and vegetation resources at an alarming rate. Genesis 1 gave humans the injunction to dominate with the idea of using and making those resources fruitful and prosperous.

The Bible: The most up-to-date manual for human guidance.

I submit to you that in discussing consumerism–how to rule our planet and social relations–how to get along with one another; the Bible is the guidebook for human behavior. Right from the start, this Book broaches the two main subjects of humanity today. All societal debates are related to one or both of these issues. How to RULE, How to SOCIALIZE sums up everything to do with society, God set it in motion and gave us the basics, and more, as we’ll discover. Genesis 1 outlines the entire purpose of humankind on Earth.

And so, we reach the end of the sixth day, with one more day to complete the creation week. I’ve highlighted the epithet in verse 31 that concludes day 6, very good. Whereas on days 1-5 it was merely good. I did point out that good was an understatement and would be better rendered, bountiful, precious, or welfare. Therefore, in verse 31, with the essential results of the sixth day, we could say it’s doubly abundant and valuable.

Concerning humans, birds, and land animals, God gives them what we’d call a vegetarian diet. No living creatures were on their menus. Beyond inevitable health considerations, which is what jumps out at most readers, there’s another consideration. No blood would be spilled.

From a Biblical point of view, the implication is worth noting. The absence of blood means there is no wrongdoing, misbehavior, or unlawful activity going on, (a study of blood in the OT and NT demonstrates this. Look at Further Study below). The Creation, including the first two humans, was in full harmony. There was an idyllic accord. I could sum up this atmosphere with one word: clean (you’ll see why I use this term when we get to the end of Genesis 2. Or you can follow this course about Adam and Eve to find out now). In the context of the first six days of Creation, everything was bountiful, clean, and pure. There was no need for any blood-letting.

All the various aspects of God’s Creation, inanimate and animate, including flora, fauna, and especially humans in the form of the first couple, the first embryo of a family, all the actors on this new world stage were now present. Their roles were defined and distributed; the curtain was already raised for the play to get underway. In fact, from the moment the male and female were together, the play had already begun, and scene one was in full progress.

At this point, as any play director would be, God was pleased. Verse 31 tells us God looked on and saw it was very good, even better than at the end of each of the first five days. Of course, the whole plan had come together. We know from the rest of the account there’s still a day to go in Creation Week, but the summarizing first verse of Genesis 2, “Thus the heavens and the earth were finished, and all the host of them,” indeed tells us we’ve completed a crucial stage.

That significant stage covers the total makeover of planet earth and its unique environs to be habitable for the animate and, in particular, humankind. God is going to complete His Creation with a significant seventh day. This day, full of meaning, has everything to do with humans, all of humankind.

This blog post is an excerpt from chapter 2.2 of the book Origin of Humankind

Go over to UnlockBibleMeaning.com and deepen your comprehension of Bible meaning. Check out these concepts.

In Genesis 1:30, study green (H3418). You’ll see that Strong calls it sickly. Let’s say that animals need a lesser variety of food and food preparation than humans. Animals do not plant and harvest food as humans have done from the beginning. Their food is automatically there, whereas our food is more often than not both cultivated and prepared.
H3418. יֶרֶק yereq yeh’-rek; from H3417 (יָרָק) (in the sense of vacuity of color); properly, pallor, i.e. hence, the yellowish-green of young and sickly vegetation; concretely, verdure, i.e. grass or vegetation:
KJV – grass, green (thing).

Notice literal (in other words: to eat using utensils, putting food in your mouth) or figurative (consume, in the sense of the use of the land, what we do with produce). Consumerism places emphasis on excessive eating in every sense of the term.

Too vast a subject and impossible to develop here. Just notice Genesis 9:1-6. A considerable change takes place following Noah’s flood. Animals can be eaten and are used for sacrifice (Genesis 8:20). There’s an injunction NOT to use the blood. Why? In short, because blood is for the forgiveness of sin. For some, this use of animals can appear to be monstrous. I understand, but we are looking at it from a Biblical point of view. Animals have multiple purposes, all of which should be respectfully respected. There is no spiritual need to sacrifice animals today, but there’s no interdiction to raise animals.

Since you read all the way to here… you liked it. Please use the Social Network links just below to share this information from The Explanation, Genesis 1 Reveals Basics: Social Relations & Rulership