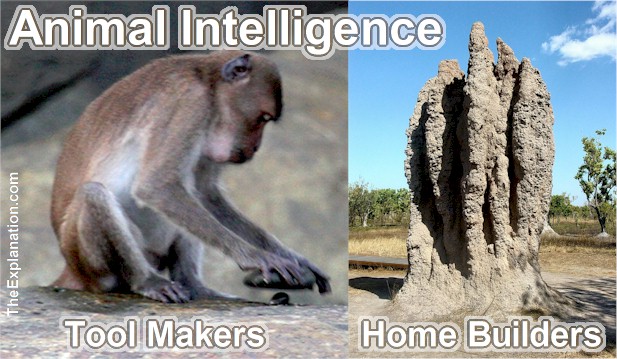 Animal Intelligence – How is it they show human-like capabilities such as Tool Making and Home Building? Animal Intelligence – How is it they show human-like capabilities such as Tool Making and Home Building?

A display of animal intelligence: A murder of crows (that’s the actual name for the flock) is hard at work in the aviary while a group of Rhesus monkeys is occupied in the primate house. As our visitors watch and observe both crows and monkeys, we compare notes and discover that the birds and primates are engaged in the same activity: tool making.
(Inventory of the Universe, chapter 6.6-7)

Minibuckets of food lie at the bottom of narrow-mouthed glass jars and long slender tubes in the crows’ nest. As a demonstration of animal intelligence one of the crows picks up a twig and tries to fish the food out.

That doesn’t work. Another crow picks up a shiny piece of metal or wire and bends one end to create a fishhook. The crow imitates what a captive crow has done at the University of Oxford: using the hook tool to retrieve food from the jar. Success.

The crow feasts and the younger crows follow its example, thereby learning the behavior. Another elder crow uses a complex tool made from twigs and grass to poke a tree stump and fish out squirming beetle larvae. As before, the younger crows learn from the example.

Our visitors report this to their colleagues, who are watching capuchin monkeys use stones to dig for food. Hitting the ground half a dozen times with the stones, the monkeys scoop away the soil and uncover mealworms and tubers, which they eat.

Chimpanzees–in another display of animal intelligence place hard-shelled palm nuts on larger stones that are straight and level. Turning equal-sized or slightly smaller stones into hammers, the chimpanzees crack the shell so that they can dig out the nut’s flesh and kernel. Our visitors in the monkey house observe the chimpanzees striking the nuts with just the right amount of force: hard enough to crack the nut without crushing it.

The chimps have learned the right sequence: on the bottom, a large stone serves as an anvil. A nut is placed on the stone, and finally a stone functions as a hammer. Also, chimpanzees have developed different types of foraging tools.

To procure a meal, for example, the chimps use their teeth to trim twigs and dig inside termite mounds for larvae. We could go into detail describing these processes, which are fascinating in themselves, but as we compare notes we find that the overall theme is the same: animals and birds are capable of making tools to solve problems.

Although we might have read about experiments in which scientists test animal intelligence, we’re now seeing the reality for ourselves. It’s an entirely different experience. We are impressed by the animals’ know-how and what seems to be their resourcefulness.

However, the question arises: why do animals, whom we assume just blindly forage in the wild and locate food by instinct, demonstrate human-like problem-solving when they seek their dinner?

Why do animals, foraging for food, demonstrate human-like problem-solving abilities when they seek their dinner? Click To Tweet

As the chimpanzees poke the termite mounds, Galacti suggests that, if our primate house group is interested in the termites, we might want to move on to the home builders’ section.

Home. Humans live in haciendas, condominiums, yurts, apartments, cottages, and all kinds of dwellings requiring careful construction. Most of us have seen an animal home of some type—a birds’ nest, a spiderweb, or perhaps a fox’s den.

We have even stumbled across animal intelligence via anthills and wasps’ nests, and we have been bitten or stung if we disturbed the insects! Yet the humble anthill is more than just a hole in the ground, and in its own way, the wasps’ nest or beehive displays as much detail and design as a Renaissance fresco.

Inside this animal intelligence display, we view a cross-section of a beehive under construction. The honeybees secrete their wax as building material in order to craft the perfect hexagons for each cell. Each hexagon is symmetrical and identical to the surrounding ones.

Female worker bees construct the cells in the honeycomb with nothing more than wax. The “rooms” in this bee home are varied: pollen storage cells, worker cells, drone cells, and the peanut-shaped cells for the queen bee, which are the only cells that are not hexagonal.

The worker bees consume eight times their body weight in honey in order to create the cells and the overall honeycomb. Each honeycomb is constructed according to precise geometric angles.

They are so precise, in fact, that even mathematicians miscalculated them. Bees are not capable of doing math or using a slide rule or protractor in order to measure. How, then, can the bees design with the efficiency of Frank Lloyd Wright?

Leafcutter ants have their own engineering achievements. Their exhibit might look like simple tunnels running through the soil—tunnels stuffed with sickly looking fungus—but there is more to this huge nest mound with its chimney or vent-like openings.

The ants have moved forty tons of soil to construct these chambers full of fungus as well as the subterranean highways that connect the main chambers with nurseries, trash pits, and side roads.

The ants move through the fungus easily and feed on it as they make their way through this city, an ant metropolis of twelve million. The enormity of the population stuns us. Over twenty rooms are home to a complex society of worker ants, a queen, waste workers, harvesters, and so on. All these ants feed on the fungus filling the tunnels.

Even the fungus can serve to educate us. The ants’ unusual décor has a natural origin: the eucalyptus leaves that the ants systematically cut and strip from the eucalyptus trees planted above the subterranean ant city. The ants carry the leaves of an entire eucalyptus tree back to the nest and chew them into salad-size pieces, on which white fungus grows.

This fungus is the ants’ food source, their own homegrown crop, if you will. In fact, the entire design of the city facilitates the fungus farm: the vents prevent carbon dioxide buildup and help to circulate fresh air, while the waste workers manage the colony’s food disposal in the waste pits located on the outskirts of the nests or in towering heaps aboveground.

How the ants can engineer such a sophisticated fungus-filled nest boggles the mind. Ants are not the only animals that have this ability. Animal intelligence is all around us.

In fact, African termites can build dirt mounds equal to 180 stories tall—almost as tall as the Burj Khalifa in Dubai. Those mega-structures contain another superior ventilation system: tunnels that conduct hot air to the surface while winds blow cool air and oxygen into the upper mound and down to the underground nest.

The termites have constructed a mound made of breathable material (a mix of dung, saliva and dirt) with multiple openings, which cools the termites dwelling in the underground nest. We wonder just how well we could live underground in these “termite condos,” or whether we could even construct them without scale drawings or architectural plans!

In fact, architects have created green, eco-friendly buildings in Zimbabwe and Australia using the simple but elegant climate control system of termite mounds. Contemplating the inspiration drawn from the gecko, the birds, and the dogfish shark, we realize that animal capabilities inspire man. This includes the ability to adapt to extreme weather.

This post is an excerpt from chapter 6.6-7 of Inventory of the Universe.

The video below show a bird fishing . Animals can use tools and objects, how clever are animals?

Ants are underground architects, engineers and builders all wrapped in one. Check out this video to see uncanny animal intelligence and skills.

This post is an excerpt from chapter 6.6-7 of Inventory of the Universe. Since you read all the way to here… you liked it. Please use the Social Network links to share The Explanation with your friends.

Since you read all the way to here… you liked it. Please use the Social Network links just below to share this information from The Explanation, Animal Intelligence as Tool Makers and Home Builders