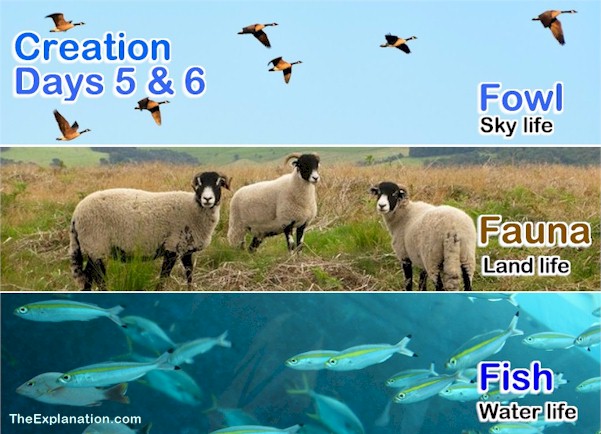 Creation day 5 and the first part of day 6: Fish in the water, fowl in the air and animals on and in the land

As we shall see, there are rhyme and reason for this creation parallelism. The fish, fowl, and fauna are all referred to as living creatures (nefesh-H2416, chaya-H5315). But another type of living creature is also included in this group. We’re going to see that the term living creatures also applies to humans, but they are totally–light-years–apart from animals.

Here are the Bible verses for creation day 5 and the beginning of day 6. Notice the Strong’s references I’ll expand below.

20 And God said, Let the waters bring forth abundantly the moving creature that has life, and fowl that may fly above the earth in the open firmament of heaven.

22 And God blessed them, saying, Be fruitful, and multiply, and fill the waters in the seas, and let fowl multiply in the earth.

23 And the evening and the morning were the fifth day.

In verse 21, we find our ex nihillo term bara for creation for the first time since Genesis verse 1. Remember, there we discussed heaven and earth and the original creation, 13.7 billion years ago. At the outset of the Genesis re-creation for the arrival of humankind, space, heaven, water, and land were already in existence as the first verses of Genesis indicate. God made (H6213) or reshaped them, adapting the sky, sun, moon, water, and land for the living creatures that He would bring into existence on creation day 5 and day 6. Here, on creation day 5, God bara fish and fowl.

Creation day 5 is for fish and fowl while the beginning of day 6 is for animals. God reshaped Earth during the first four days. Now it's time to populate Earth with the living creatures. Click To Tweet

Only one species is mentioned here on creation day 5, the whale; the Hebrew is also translated as serpent, dragon, and sea monster elsewhere. The whale is the largest marine animal; I remember being amazed at seeing one on a freight wagon with its tail hanging way off the end in Durban when I was young. A whale’s heart can be the size of an elephant’s. Whales are the largest of all animals on the face of the earth today.

תַּן tan tan; from an unused root probably meaning to elongate; a monster (as preternaturally formed), i.e. a sea-serpent (or other huge marine animal); also a jackal (or other hideous land animal):

Creation Day 6 is a momentous moment in the history of the universe. We will spend an excessive amount of time and space explaining these events, particularly during the second part of this pivotal day.

The first thing I’d like you to note is how the author of Genesis expresses the arrival of animals, Let the earth bring forth the living creature after his kind, cattle; it’s important to notice what’s missing here. There’s no bara, ex nihilo creation. We know that until day 3, there was no land so there were no land animals. Conclusion: God did bara all types of fauna. But, this creation is played down. The narrative puts off the arrival of animals to the earth.

יָצָא yâtsâʼ yaw-tsaw’; a primitive root; to go (causatively, bring) out, in a great variety of applications, literally and figuratively, direct and proxim.:

Is this creation of the animals second-rate? Of course not. The emphasis here is not animal creation inferiority but the huge contrast between what God created at the beginning of the 6th day, animals, and later that day, humans. We shall see this inescapable contrast as we proceed with our study.

On Day 6, for the creation of animals, we have two Hebrew words used to describe them: living creature and cattle. The term living creature is nefesh chaya in Hebrew. It is mistranslated livestock in certain translations. We shall return to this term because it is also specifically used to refer to fish, fowl, and Adam; this causes some people to think that fauna and humans are one-and-the-same. Not so, by any means, as let the earth bring forth is only the first contrasting factor between fauna and humans, as we’ll see.

The term 'living creature' is 'nefesh chaya' in Hebrew. It refers to fish, fowl, animals, and Adam. Some think that animals are related to humans. We'll see that light-years separate them. Click To Tweet

As for the second term behema (929), again, careful, it is not cattle in the sense of domesticated fauna as we can see from Strong’s inclination towards any large quadruped or animal. Let’s say this beginning of Day 6 includes creating all land animals, including chimpanzees and other biped animals like kangaroos.

Which brings up a point to consider. All animals, fowl, and fish are human size. Even lions, tigers, and bulls, what we’d consider ferocious animals, are human-size. What I mean by this is, humankind can co-habit with and master the animal world around themselves. Each is not living in their isolated corner. Dogs, horses, camels even elephants are suited to work with and besides humans.

What would it be like to cohabit with a Brontosaurus? And it wasn’t near as large as Titanosaur, weighing 70 tons and 39 meters long.  While we’re on this subject, remember our animal-man comparative chart from Inventory of the Universe? Well, here’s a dinosaur-animal chart to draw your attention to the fact that the respiratory, muscular, heart, skeletal systems, that characterized those real monsters were far superior in complexity compared to animals we find today. Those powerhouse monsters would make mincemeat out of today’s supposedly advanced animals, as well as you and me. 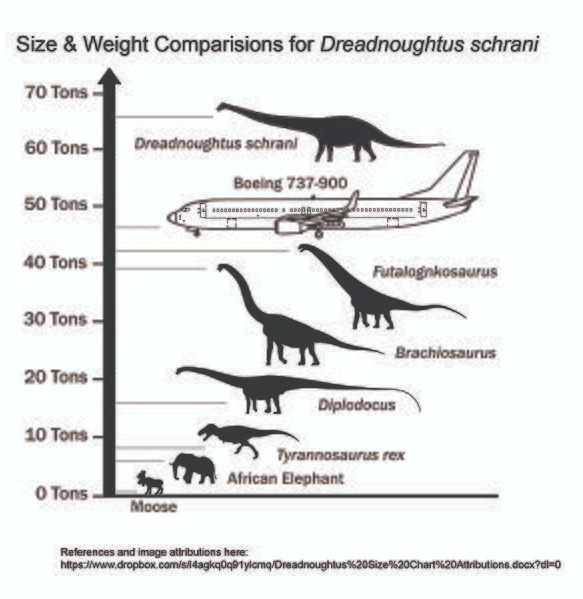 This dinosaur-animal chart shows the sizes and weights. Even an elephant pales into insignificance. What about you and me?

Keep in mind, one of the critical points of this creation recital is to prepare an environmentally friendly room for the arrival of the baby, everything adapts to the toddler. Likewise, all the inanimate and animate planetary creation surroundings are designed, sized, and structured for human size, strength, skills, and abilities.

Humans can craft a pole and line, fishing rod, trawler, fishing vessel, and whaler, and catch anything and everything. They can keep exotic fish in an aquarium and train dolphins and whales. We can cage budgerigars and parrots and train pigeons to carry messages and Cormorants to catch fish. Even the king of birds, the eagle, obeys human commands. Humankind can trap and kill panthers, train snakes, and play with tarantulas. Mind you; I wouldn’t; that’s beyond my limits!

The variety of animals, their beauty, their skills, their survival instinct, their energy, their endurance, their physical qualities are multitudinous as we saw in Inventory of the Universe. As scientists explore the ocean depths, jungle gigantism, and mountain magnitudes, they never cease to be amazed by new species with life models more astounding in ingenuity than they could’ve imagined.

I’m writing this in Surf City, North Carolina, where I’m sitting at a makeshift desk I set up in the living room of a condo just 10 meters from the crashing surf. It’s November and practically not a soul in sight. Try it, step back from your little world, breathe in real life, broaden your horizons, consider the fauna in the depths and on land, and the fowl in the heights.

And God saw that it was good, a phrase that crops up six times to conclude sections of creation from day 1, 3 (twice, after creating the land and then after the flora), 4, creation day 5 and to this point on day 6. As I pointed out, good is the understatement of the year. The creation is breathtaking. Page through National Geographic magazine, even scientists are dumbfounded by nature. No words do God’s creation justice. Maybe that’s why the author uses the word tov (good), which is a common word in modern Hebrew today. Look around, contemplate, and see how tov our natural environment is.

As incredible and as unimaginable creations on day 5 and day 6 of the natural world as we know it might appear, they pale into insignificance compared to the creation that is about to take place and which rivets 99% of our attention. The preceding is only the room, now for the baby with the arrival of humankind.

This blog post is an excerpt from chapter 8.9 of the book Origin of the Universe.

Since you read all the way to here… you liked it. Please use the Social Network links just below to share this information from The Explanation, Creation Day 5 and 6. God Created Fish, Fowl, and Fauna