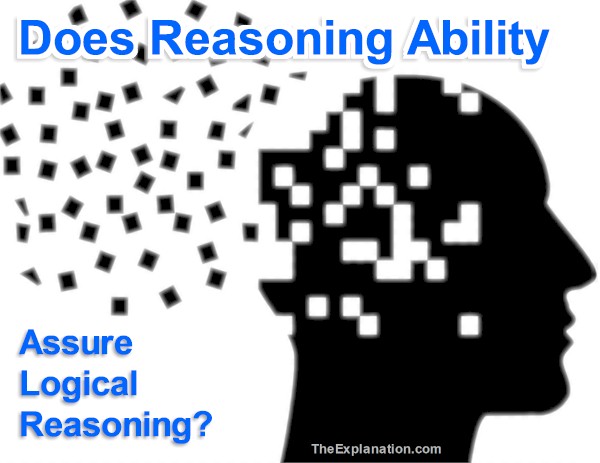 Reasoning with our mind is a human singularity. Does this reasoning ability allow each of us to think logically?

Does reasoning ability with the mind warrant logical reasoning?

Reasoning or rational thinking is part of human behavior. Animals spend most of their time looking for food and eating. We, humans, spend most of our time chewing the cud. We regurgitate and turn ideas over and over and over in our minds. To what end?
(Audit of Humankind, chapter 5.1)

This is the concluding section of Audit of Humankind. At the same time, it is really just the beginning. The conclusion because Audit of the Universe and Audit of Humankind go crescendo to reach this peak-point of human singularity. Our reasoning minds.

The beginning because we are going to question how humankind reasons. Not the mechanism, although we’ll spend a little time on that. But rather, the step-by-step process of starting with an idea and reasoning to a closure. There’s a period of reflection, gathering of information, sorting the pros and cons, and drawing conclusions. All these intermediary stepping-stones are part of the thinking process.

But first, we need to anchor the realization that only humans think and reason. Yes, monkeys grab a stick to dig worms out of a tree. They fill a test-tube with water to have the peanut float to the top so they can eat it. You can call that reasoning but that is very simple. It’s thinking focused on one situation. Humans think on many planes at the same time. Just getting a meal ready necessitates thinking about all the ingredients, gathering the right quantities, mixing, cooking, coordinating the dishes to be ready at the same time for dinner. And that doesn’t include setting the table and listening to the radio while the phone rings.

Humans are reasoning beings. In fact, most of our waking hours are spent thinking and reasoning, oftentimes too much and about the wrong things. Overthinking, leading to anxiety and related issues is another matter that I don’t want to get into here.

Where does thinking take place? Most would probably venture the brain. In Inventory of the Universe section 9, Brain and the Mind, and in section 9 of Audit of the Universe I discussed this point. Brain scans light up split seconds AFTER a thought and split seconds BEFORE an action. There’s a clear sequence of the thought impacting the brain which then sends signals to execute the associated action should there be one. You could be thinking about a memory, in which case there’s no action or maybe a frown or smile depending on the emotion evoked.

The human mind confers the ability to think and reason. As I pointed out in section 1 of this book, the mind is the reason behind all the singularities that characterize humankind. You can review this and especially realize that behind all the human singularities is the ability to reason: human nature, space-time management, creativity, imagination, learning, making choices, growth, challenges, and rulership.

The ability to reason is the most complex and highest expression of the mind. It allows humans to conceive medicine to heal, buildings that are 830 meters tall (the Burj Khalifa in Dubai, the length of 8 soccer fields, end-to-end), and spaceships to send humans to the moon and back. It allows humans to write books, compose music and draw art. The mind and its capacity to think through intricate patterns or organize information are at the origin of everything humans have accomplished on Earth.

Thinking expounds ideas and reasoning puts these ideas into a usable format for plans or inventions. Theory and logic go through a process of verification of ideas, findings, observations to see whether they make sense, whether there are valid and valuable conclusions that can be drawn from the data. The electron microscope in the video below provides images of the atomic structure of metals. With this information and logical reasoning, scientists are able to create strong alloys for aircraft that will not crack in turbulent winds.

Many of us have inherited or grabbed ideas from a variety of sources and lumped them all together. We might not have examined them to see if one of our beliefs may contradict or nullify another. We may suffer anxiety and confusion if our stories conflict with each other, as we continually bump against experiences or dilemmas that cannot be adequately explained or effectively handled.

Today, the term fake news has become commonplace. A lot of fake information is being fed into the knowledge system of which all of us are the end-users. It behooves each of us to be very careful as to what facts and information we incorporate into our personal knowledge treasure-house. You decide what facts go in, go through, get retained, and go out of your mind. This is a two-way street because depending on the preceding exercise, your knowledge, what you have in your mind, defines who you are and your values.

Let me take an example. There’s a controversy around whether the USA actually landed men on the moon. Some believe it, some think it’s all a hoax. in 1969 Apollo 11 took Armstrong and Aldrin to the moon Today, you can take a powerful telescope and see the spacecraft debris from that mission. In spite of real evidence, some people will still either reason their way around reality, or simply reject it. Why do they do this? What is the remedy? Is there a solution? Can you convince someone against their will? Should you even try to convince someone? Can a person go beyond the point of no return when it comes to belief in something that is not a fact? I will not be answering those questions now, think about them, we will broach them, but later on.

In the 17th and 18th century when microscopes were being developed and humans could peer at reproduction cells they imagined, reasoned and concluded there were little curled up people inside of them. Yes, a hilarious conclusion. But that’s no more hilarious than Santa going down a chimney or rabbits laying eggs. It all comes down to WHAT information we allow into our minds and the REASONING we do with that information to draw conclusions.

Those conclusions become our beliefs. Our beliefs then become the basis of our worldview. That’s how we see the world and ourselves. That’s what we’ll defend, sometimes vehemently, in a discussion, an argument, a movie or a book.

Then there will be people who, for whatever reason, will hook onto that reasoning and make it their own. Some will even go and find further evidence and proof. Until, finally, you’ll get a whole group of individuals who believe this information and transform it into a fact. Take the following questions. There are vociferous groups on both sides of the checkerboard.

There are various views regarding these questions each providing powerful arguments and convictions. Each is convinced they’re correct. None, or few, will budge from their idea. This is where the human reasoning mind leads us. There are an incredible number of ideas and speculations, not to say theories and beliefs, about the metaphysical, scientific, religious and philosophical worlds.

Can the reasoning human mind make sense out of this vast array of discord? The price humanity pays is an absence of peace of mind and a lack of prosperous, worthwhile knowledge and wisdom.

This blog post is an excerpt from chapter 5.1 of the book Audit of Humankind.

Since you read all the way to here… you liked it. Please use the Social Network links just below to share this information from The Explanation, Does Reasoning Ability Assure Logical Reasoning?