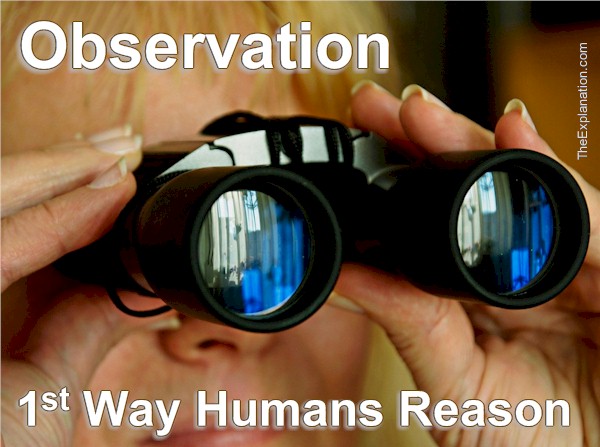 Observation to establish facts and then organize them is the first way humans reason with their minds.

Observation is what humans do 24h/day. When we use our five senses to see, hear, smell, taste, and touch we’re observing and recording facts about everything we interface with.
(Audit of Humankind, chapter 5.3)

“Now, my dear Watson, is it beyond the limits of human ingenuity to furnish an explanation which would cover both of these big facts? … why, then it would be worth accepting as a temporary hypothesis. If the fresh facts which come to our knowledge all fit themselves into the scheme, then our hypothesis may gradually become a solution.”

This statement is worth reading a couple of times. It is worth engraving in your mind, because of the wisdom it contains.

The human reasoning process starts out by sourcing facts. Just like with fake news, as we saw last week, we can have fake of distorted facts. Our source AND the interpretation of what we observe must be reliable. How many times do we hear conflicting reports about the same phenomenon? I’m not talking about lying or manipulating. People, for whatever reason, register observations differently with their senses. That’s why the observation has to be established by at least two, if not numerous witnesses.

A fact is something that is proven to be true. There are three elements here. Facts. Proof. Truth. Not easy to come by all three. However, observed facts are, or should be, the basis of any and all human reasoning process.

According to Holmes’s above statement, it should be HUMAN INGENUITY to come up with an EXPLANTATION that MAKES SENSE out of two or more FACTS. Human reasoning should be able to reach ONE EXPLANATION that includes all the known facts. Be they two or twenty. Furthermore, any NEW FACT must fit INTO the overall schema.

I’m going to give you two examples of observance that leads to formulating a scheme, an overall plan. We could call this a worldview. That is what each of us formulates based on our personal gathering (observance) and synthesizing (juggling and organizing) of facts.

The first case comes from a book entitled Critical Mass by Philip Ball. That link is to Amazon, I suggest you read the Look Inside because the introduction is a remarkably lucid analysis of the pros and cons of national governance. I will add this to the preceding chapter. But, specifically, there’s an in-depth section devoted to Thomas Hobbes’s monumental book Leviantan which seeks to demonstrate the physics of society.

If anyone can be associated with observation it’s Galileo. From viewing the stars he deduced the law of inertia. Galileo observed the celestial bodies moving and theorized that if you can eliminate all exterior forces like gravity and friction a natural body (star, planet etc) would move in an unchanging direction at an unchanging speed. Hobbes met Galileo in 1636 and considered this truism as the basis for his theory of governance. for Hobbes, this was the foundational fact on which to build his schema.

The constant motion of people was their normal state. Human decisions, emotions, and feelings always moving, always acted on by external forces. This included the mind which he considered as a sophisticated calculating machine. In Leviathan he wrote, “For reason … is nothing by reckoning.”

Today, this is akin to how cognitive science and artificial intelligence regards human beings. Automated algorithms. Hobbes’ observation and reasoning led him to believe humankind is deterministic. Humans are a kind of machine and you can dissect human nature by considering one’s own nature. He used himself as the prime puppet. He said,

Whosoever looks into himself and considers what he does, when he does think, opine, reason, hope, fear… and upon what ground; he shall thereby read and know, what are the thoughts, and passions of all other men upon the like occasions.

Hobbes’ observation departed from a false start and any reasoning from that error couldn’t lead him to proper conclusions. True, he got a few things right, one of which was understanding that the desire for power is extremely motivational. But his whole schema is flawed for want of correct observation.

The second example is from a lecture by Jordan Peterson. He is a Professor of Psychology and Clinical Psychologist. However, he now spends most of his time writing and especially lecturing. He has become very well known for his intellectual outspokenness and frankness. He has 365 videos and is closing in on 2 million subscribers on his Youtube channel.

I’m going to refer to how Dr. Peterson refers to and uses observation in the video below. It’s rather lengthy but there is a transcript if you want to peruse it quickly. What will strike you is a totally different observation than Hobbes and many other deterministic scientists today.

At 35:32 in the video. “So artists observe one another. They observe people and they represent what they see and they transmit the message of what they see to us and they teach us to see it. We don’t necessarily know what it is that we’re learning from them. But we’re learning something, or at least we’re acting like we’re learning something. We go to movies, we watch stories, we immerse ourselves in fiction constantly. That’s an artistic production. And for many people, the world of the arts is a living world, and that’s particularly true if you’re a creative person. It’s the creative, artistic people that do move the knowledge of humanity forward.”

People are ever-changing, Observation is one of the ways to try and learn about what the human make-up is all about. What ingredients constitute a human being? I did cover this in section 2, How Humans Function.

Dr. Peterson has just written his book “12 Rules for Life.” This is based on his observation of his patients and humans in general. Many others have written similar works, “This is What to Do so Humans will Live Peacefully and Happily.” Although there is much wisdom to be gleaned from such tomes, there is also, unfortunately, a certain amount of contradiction and confusion.

If I put it another way, It’s like a sophisticated computer or robot looking at itself or a colleague and writing the instruction manual of how they function. Is this feasible? You decide.

Dr. Peterson is very lucid in his comprehension of the complexity of humankind as we shall see in these concluding quotes.

At 16:05 in the video above. “We act out things we don’t understand all the time. If that wasn’t the case, then we wouldn’t need psychology or sociology or anthropology or any of that because we would be completely transparent to ourselves. And we’re clearly not. So, we’re much more complicated than we understand, which means that the way that we behave contains way more information than we know.

And part of the dream that surrounds our articulated knowledge is being extracted as a consequence of us watching each other behave and telling stories about it for thousands and thousands and thousands of years. Extracting out patterns of behavior that characterize humanity. And trying to represent them, partly through imitation, but also drama and mythology and literature and art and all of that. To represent what we’re like so we can understand what we’re like.”

At 105:33. “Because, first of all, we are the most complicated things there are that we know of, by a massive amount. We’re so complicated that it’s unbelievable.”

That’s quite an admission by an extremely profound psychologist who has spent a good part of his professional life dealing with real people with real psychological dilemmas.

Descriptions of things, events, activities, accidents, feelings, sitings… if corroborated, are all FACTS, no matter who they come from. These are all observations.

In this first category of how humans reason via observation, we can include experiences, history economy, politics, military, religion, and many others. It encompasses events of all sorts that have been experienced in the past which constitute valid observations. Of course, I’m referring to IMPARTIAL, NEUTRAL observations. It would be like a non-partisan journalist attending or reporting on all aspects of an event.

Every true observation is a fact. Many of them will be in opposition as we shall see when we discuss science and religion. These oppositions are facts. They have to be explained, they are pieces (maybe anti-pieces) in the assembled puzzle.

Remember Sherlock Holmes as you contemplate facts from your and other’s observation. ALL fresh facts must fit into the schema and when we assemble ALL the facts we have a final picture. That picture is the solution, The Explanation. It’s on your way to that unique image, that coherent completeness, that you can know you’re dealing with proper reasoning.

This blog post is an excerpt from chapter 5.3 from the book Audit of Humankind.

Since you read all the way to here… you liked it. Please use the Social Network links just below to share this information from The Explanation, Observation, The First Way to Human Reasoning