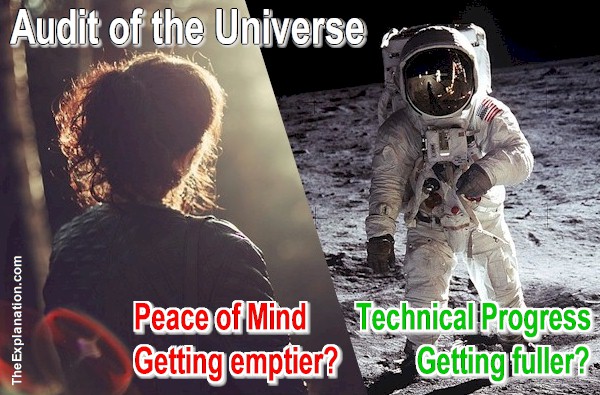 Our Audit of the Universe reveals that humankind’s technical progress has been astronomic, but their peace of mind has not followed.

Our Audit of the Universe reveals that humankind’s technical progress has been astronomic, but their peace of mind has not followed.

Audit of the Universe asked and answered the question, what’s up with all those pieces of Inventory of the Universe? How are they faring in 2019? Plus, we took a closer look at how humankind functions, their social institutions, endeavors, and ways of reasoning. I tried to leave it up to each reader to decide whether the glass of peace and prosperity on Earth is getting fuller or emptier.
(Origin of the Universe Preface 2)

Objectively, I think you were able to detect that while I feel technically the glass is without a doubt getting fuller, humankind’s way of life is getting emptier. Humankind possesses mental outlets, their interior fiber, that makes us a very particular species: our mind with its capacity to conceive and our body with its capacity to manufacture and create marvelous endeavors. Humankind is not using those remarkable abilities to blossom; we’re in a continual and perpetual search for an evasive, elusive something.

We’re progressing at an exponential rate, and at the same time, there seems to be a void, we don’t know where they’re headed, and the emptiness seems to be engulfing us. Something like accelerating into a black hole. We‘ve got all the gadgets for a life of ease, but inner peace and prosperity elude us. When humankind steps off the motorized treadmill where they’re running for health and wellbeing in a stationary position, where do we stand? If we put aside all our life-toys, what do we have deep down?

#Humankind has got all the gadgets for a life of ease but inner #peace and #prosperity elude them. Click To Tweet

In Audit of the Universe and Humankind, we discussed Government, Science, Philosophy, Religion, and Mythology. The common denominator among these diverse disciplines is their search for answers. I concluded that given the present state of affairs, there’d been an awful lot of searching, which continues, but we’re short of answers, real answers about the fundamentals of life.

How do you explain so much worldwide depression? Why can’t we know the purpose of life? And a million other queries.

These interrogations touch on subjects like: Is there some external force out there of which we’re maybe not fully aware? You can name it whatever you want; the question is: is humankind alone in the universe? Whether we think there’s intelligent life on another planet or some spirit being, the question remains.

In Audit of the Universe, I discussed how we are thriving. We surveyed the immense inventory, the universe of animate and inanimate to see how it is faring. We asked the fundamental question: Is the glass of peace and prosperity in each of these fields getting emptier or fuller?

An intermediate conclusion concerns the singularity of humankind, who, alone, can take such an Inventory and proceed with such an Audit. We humans alone, have the culture to survey, evaluate, record, and transmit such conclusions.

Given this unique propensity of humankind, we discussed four characteristics that set us apart from and above all known creatures on Earth and, to this point, in the known Universe.

When it comes to humankind, the common denominator among Observation, Philosophy, and Science is how all of humanity searches for their answers. This method is in contrast to Religion, where humankind acquiesces to revealed knowledge from an OUTSIDE Higher Source.

Experience, Science and Philosophy are humankind's search for their answers in contrast to Religion's acquiescence to an OUTSIDE source Click To Tweet

Audit of the Universe is an analysis of the entirety of humankind’s answers to see how far we’ve come, what we’ve done with those answers, whether they’re yielding peace and prosperity, and opening up a bright future.

In Audit of the Universe and Humankind, we also, very briefly, looked at the impact of religion on our present state of world affairs. Can we say that religion is filling the glass with peace and prosperity? Even those within any particular religion would have a difficult time with that one. I’m not talking about what they think the impact of faith, in general, is going to be on world peace and prosperity. The answer to such a question is speculation. The real problem is, what is religion’s impact NOW?

I concluded that given the present state of affairs, after all this searching and sifting of data, which is on-going, we’re still quite short of answers, real answers about the fundamentals of life and what brings peace and prosperity. Witness the world around us. So many how-to books, So many rules-of-life books. So many opinions, so few real solutions.

And there are specific questions that none of the first three disciplines can answer. Many would include the 4th religion: How do you explain Life? What is its origin? Why are we here? Following Audit of the Universe, here are the answers.

I include in those unanswerable and unprovable questions: Is there some alien force out there of which we’re maybe not fully aware? You can name it whatever you want; the question is: Is humankind alone in the universe? Whether we think there’s intelligent life on another planet or some spirit being, the question remains. And the first three disciplines can only conjecture; they certainly cannot answer these types of metaphysical questions.

This post is an excerpt from Preface 2 of Origin of the Universe.

Since you read all the way to here… you liked it. Please use the Social Network links just below to share this information from The Explanation, Audit of the Universe: Technical progress–Yes, Peace of Mind–No