Science, Our World’s Savior. This is Human Reasoning 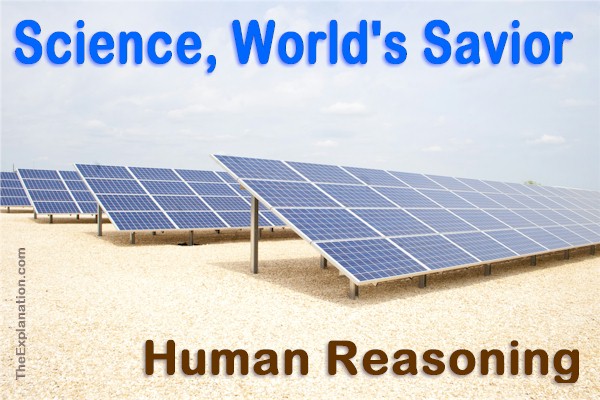 Science and technology, Theory and application. The demise and the solution? Human reasoning sees them as solving world ills.

Science is considered by many to be the world’s savior. This is human reasoning.

Science, when it comes to climate change, cancer or food supply, most to the world looks to the experts in this field to solve our problems. Science says it will reduce and end world ills. Most of humanity tends to believe this and reason this way.
(Audit of Humankind, chapter 5.8)

This final chapter of Audit of the Universe is delving into the ultimate purpose of the human mind. Our ability to use our minds in creative and innovative ways. Humans alone, on Earth, can think and reason, mastermind, and conceive ideas and plans. We alone can gather facts, draw conclusions, come up with solutions and turn them into functioning machines, endeavors, and achievements.

Firstly, we looked at how humans reason based on their history and personal experiences. Secondly, we saw intellectual philosophers conceive the wisdom to live happily ever after. And we spent time with spiritual philosophy. Those who believe there’s some sort of extra-physical force that we can put to service to find solutions and choose a suitable path along the bumpy roads into the future.

We now turn our microscope to focus on science. Compared to the three other methods of human reasoning (the fourth is religion which we’ll discuss lastly), science has a couple of particularities we need to keep in mind.

One of the most incredible accomplishments of mankind is to be able to investigate his environs in the minutest detail and apply this knowledge to technology. From the geometry of the Egyptian Pyramids some 5000 years ago to Man on the moon, we’ve come a very long way in deciphering what makes not only planet earth, but the entire universe more understandable. Humankind has not only discovered the fundamental laws that cause order but also harnessed those laws to take themselves to phenomenal, unimaginable places like the supposed inaccessible moon, planets and stars. We’ve pierced the intricate workings of the heart and brain and the minutest molecules, atoms, and quanta.

Physics, Chemistry, Biology, the basics all the way to Neuroscience, Cosmology, Chaoplexity. These are quests to catalog our environment, measuring, weighing, counting, testing, verifying, transforming the unknown, taken for granted phenomena like why a solid is solid, what makes liquids flow, why the sky is blue… into scientific laws. Science has made sense of our planet, you and I and our place in the immensity of the universe.

Pure science defined as the search for comprehensible regularities or patterns in nature, gives real answers to real questions. Not speculations, surmisings, ideas, imaginings but laws and theorems that render unchanging solutions for today’s and tomorrow’s generations.

This knowledge is taught to enlighten children in their classrooms or in the forests of the Congo, the deserts of Yemen or the Steppes of Russia. This factual knowledge is nation-less, government-less, religious-less. It is universally and unanimously accepted and even saluted. Names like Pythagoras, Newton, Kepler, Galileo, Einstein… are the cornerstones on which the real renowned reputation of science was built, they will go on for all eternity.

Maybe you’re beginning to ask yourself a question. Why is he pounding this point so strongly? That’s a very good question… because that’s exactly what I’m doing and for the following reason: In 2019 the reputation of science is slipping into the realm of pompous promises that have gotten the world all hyped-up about a peaceful and prosperous future that is always 30 years away. In 1970 it was the year 2000. in 2000, the year 2030, and today it’s 2050 if not earlier.

In 2004 I was on a trip to the USA in the Raleigh airport where there was a second-hand bookstore. While browsing I found an incredible book. I didn’t think anyone would broach a subject like this, but John Horgan did: The End of Science – Facing the Limits of Knowledge in the Twilight of the Scientific Age. Interviewing many prominent scientists, he relentlessly pursues the question: Has all the knowledge worth pursuing become known? Have the major questions been answered? And, the ultimate, will there be a “theory of everything” bringing pure science to an end.

In 2015, to celebrate 20 years since the original manuscript, he rewrote the preface for a new edition. Here’s an excerpt.

In some ways, science is in even worse shape today than I would have guessed back in the 1990s. In The End of Science, I predicted that scientists, as they struggle to overcome their limitations, would become increasingly desperate and prone to hyperbole. This trend has become more severe and widespread than I anticipated. In my 30-plus years of covering science, the gap between the ideal of science and its messy, all-too-human reality has never been greater than it is today.

This tendency of scientists to sway towards hyperbole is coined ironic science by Horgan. It’s like fake-news in that it’s very imaginative and based on speculation. It’s at the antipodes of the truth of scientific laws based on measured and provable evidence. Horgan’s concept is science has got all the basic knowledge down pat. Science will add many more details and fill in the blanks, and substantiate their claims more and more. But, no new major development will come to light, since science has reached its limits of witnessing the smallest and the largest, most distant reaches of the physical universe.

Now, scientists are resorting to taking their knowledge and imagining creative theories. Unverifiable ideas they are propounding based on the credibility they’ve rightfully built up but which can crumble very fast.

Peruse this Scientific Americal Worldview – A Global Biotechnology Perspective to see what I mean by speculations based on scientific and technological breakthroughs. This dates back five years and there are plenty of more recent examples but this will give you the idea.
Tracking Innovation’s Value to Society. A Picture of Health Technology will empower tomorrow’s patient-consumer. Here’s how it views healthcare in the future.

Of all the areas impacted by biotechnological advances, healthcare is likely to yield some of the most exciting changes. “We’re going to lose the word ‘patient’ and move to ‘consumer,’” says G. Steven Burrill, chief executive officer of Burrill & Company in San Francisco, California. “We will see the retailization of healthcare, where Wal-Mart, CVS and Walgreens bring new technologies, like sequencing, to a level where consumers can get the information cheaper and faster.”

Burrill predicts that in the near future people will be using digital technology to track their health on a daily basis. “This is not a wild and crazy Star Trek future,” he says, “because the technology is here today, and you are beginning to see it in the sickness care to wellness care transformation.”
Ultimately, the success of this transformation will depend on the biotech advances being made now. “Biotechnology is right in the middle of this, because it’s providing tools that measure what’s going on inside the body and at an affordable level,” Burrill says. “People can use these tools to maintain their state of wellness.” And that could be one of biotechnology’s biggest achievements of all.

We believe that we are just at the beginning of our ability to use technology to improve wellbeing, protect the planet and promote exploration.

This is how humankind reasons when it comes to science. The question is, is this human reasoning valid? Will science be the savior of the world and establish that peace and prosperity humanity so longs for?

This blog post is an excerpt from chapter 5.8 of Audit of Humankind.

Since you read all the way to here… you liked it. Please use the Social Network links just below to share this information from The Explanation, Science, Our World’s Savior. This is Human Reasoning