Humankind’s Dual Nature Differentiates Us from all other Creatures 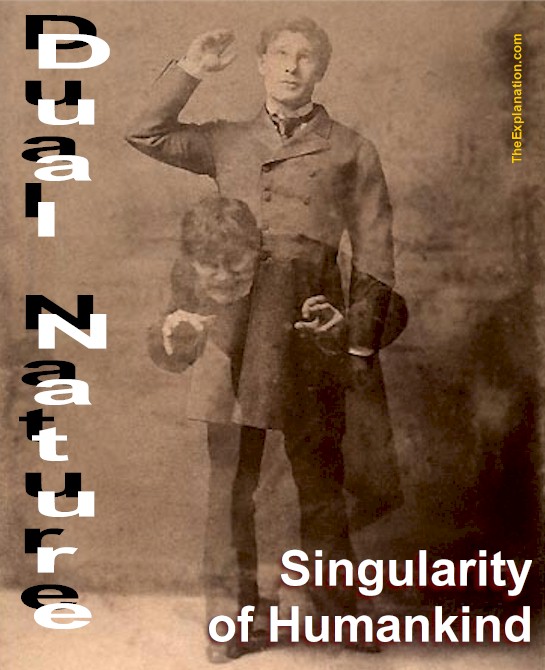 Our dual nature, the propensity to do both good and bad, sets humankind apart from all other forms of life on Earth.

The singularity of humankind is epitomized by their dual nature. The capacity to do both extreme good and extreme bad.

Dual nature, reaching out to fellow humans or the planet, with proper or improper motives is a characteristic of every single human being. It is singular to humanity with wonderful or disastrous consequences.
(Audit of Humankind, chapter 2.3)

The Singularity of Humankind

The human condition is not constant. Even as children, we are all capable of considering both right and wrong actions with equal attention. You can remember a day while you were still young when you were confronted with evidence of some kind of childhood wrongdoing like sneaking a cookie or breaking a lamp. You can also remember deciding whether to lie about it, confess and hope for forgiveness, or even framing another person for the crime. Every human being has both criminal and altruistic thoughts and actions.

“At the beginning of our Inventory of the Universe,” says our gregarious guide Galacti, “we discovered all the building blocks–the pieces of the puzzle–in the universe: the atoms that comprise life, the land, and sea where life grows, the processes that sustain it. We then looked at the kinds of life that inhabit this earth. As we examined flora, fauna, and man to discover that humans are unique among all other kinds of life.”

I think about that, and in thinking underscore the truth behind that piece of the puzzle that is existence. The fact that I can think about, understand, and consider the ramifications of humanity’s place in the universe is exactly what makes us different from all other life.

The fact that you and I can think about, understand and consider the ramifications of humanity’s place in the universe is exactly what makes us different from all other life. Click To Tweet

Galacti continues. “In Audit of the Universe, we explored further and saw that man’s unique intellect and cognitive ability gives him a peerless capacity to change the nature of the earth and even of life. We investigated how he used that capacity, and whether his efforts across all considerations contributed toward peace and prosperity.”

I remember the journeys we took together, and what they taught us. We found points that were happily positive and depressingly negative. We found examples of great goodness and terrible depravity, and a lot of indifference or lack of awareness. These findings suggest a part of humanity that we will spend this chapter exploring in-depth:

In Inventory chapter 10 comparing fauna and humanity, I wrote fauna runs off with all the Olympic medals by humans think their way to all the Nobel prizes. I started to differentiate between animals and humans. In that chapter, difference were merely at a physical level. How fast can you run? How far can you see? The number of genes and neurons in our respective bodies.

But the last chapter of Audit of the Universe about humankind’s mind has bumped the ante up not just a notch but a light-year. Each and every human possesses a mind that sets them miles above and miles apart from any and all other creatures on Earth.

Humankind’s mind differentiates us from animals. It has bumped the ante up not just a notch but a light-year. Each and every human possesses a mind that sets them miles above and miles apart from any and all other creatures on Earth Click To Tweet

The British Museum and other anthropological learning institutes present schemas of skeletal modifications that have transformed man into a higher species. Many believe that humans are humans because of these skeletal progressions. That includes, in particular, the brain, considered the master organ of the body. Ponder this statement:

The central nervous system (CNS) controls most functions of the body and mind. It consists of two parts: the brain and the spinal cord. The brain is the center of our thoughts, the interpreter of our external environment, and the origin of control over body movement.

Again we see the affirmation the brain is the ‘center of our thoughts.’ The last chapter of Audit of the Universe about the human mind broached and revealed the incongruence in such a proposal. If you haven’t read it, I highly suggest you do because the human mind is the capstone piece of our puzzle and if you don’t understand the role it plays and the position it occupies in the human equation–you will not be able to put the puzzle together.

This chapter about the Singularity of Humankind continues in that vein. All the attributes we’ll discuss here that make humans human cannot, in any way shape or form, be discovered or traced to the brain. Oh yes, they all affect the brain, some of them, very severely, but none can be pin-pointed as originating in the brain.

We start with the dual nature of humans, our propensity to do both uplifting good and downgrading bad. Ask yourself, where does the ‘dual nature’ in humans reside in that 1.5 pound, 73% watery organ each human possesses between their ears?

Mankind is singularly of a dual nature. We are of a dual nature that is different from animals. Unless we can understand how this works within us, to capitalize on its strengths it provides, and to overcome its weaknesses, we cannot truly begin to learn how to create peace and prosperity for ourselves…let alone the life and land all around us.

Humans possess a dual nature. Unless we can understand how this works within us, to capitalize on its strengths and overcome its weaknesses, we cannot truly begin to learn how to create peace and prosperity. Click To Tweet

We are capable of both greatness and lowliness, of love and hate, of kindness and violence. We might save our world through ingenuity and compassion, and we may yet destroy it with our own wars and pollution.

Of all life on Earth, only we are capable of such extreme changes of behavior. If you find a coral snake, you know it’s poisonous but you can predict its behavior. Lions eat meat and kittens play with bits of string. You will never find a vegetarian lion. nor a kitten who prefers to swim in the ocean. Animals are of one nature, while we humans are multidimensional.

An exception to this is animals who spend a lot of time around us. If you select two dogs of the same breed at random, one may be kind while the other is vicious. This is not the fundamental nature of the dog. It comes from how that dog was raised and treated by the humans around it. Its natural “dogness” was contaminated by our changeability and inconsistency.

This duality of nature exists within each of us. Our enlightened side understands that diet and exercise are important, but our darker side responds only to the deliciousness of fast food and how fun it is to watch television. Our internal Dr. Jekyll says to be kind and patient with our loved ones, but the Mr. Hyde inside each of us has violent visions about someone who cuts us off in traffic.

As a species, we demonstrate both sides of this dual nature. Some people care deeply and responsibly for their families, while others abandon those responsibilities to indulge in sex, drugs or other addictions. On the same day one person might volunteer with disaster relief in an impoverished nation while another takes a gun to a crowded mall with murder on their mind. One successful businessman amasses his fortune through predation and fraud, while another uses his wealth to fund humanitarian ventures.

In some cases, it’s the same businessman. A single person can show both the extreme goodness within us all and the extreme depths to which we can sink. The story of humanity is essentially this story.

“We’ve spent much of Audit of the Universe exploring the effects of man’s dual nature upon the Air, Water, Land, Flora, and Fauna of the earth…as well as on their Bodies and Minds,” Galacti says. “Now, let’s zoom in our focus and see the origin of these effects. It’s humankind’s dual nature that is the cause of the state of affairs on planet Earth today.”

Here are a few stories of human beings who demonstrate this dual nature.

At the height of the Cold War the United States and the Soviet Union were poised to destroy the entire world with their arsenals of nuclear weapons. For two weeks in 1962, they came as close as humans have thus far to ending life on Earth. During the Cuban Missile Crisis both sides appeared ready to “push the button” and spark off World War III.

This global shouting match included a naval engagement in the Caribbean Sea near Cuba. US ships were blockading the island, and several Soviet submarines were on site. U.S. destroyers hunted the submarines and when they attacked one directly, the sub’s captain ordered a launch of their nuclear torpedoes. This act would have demanded a nuclear response by the United States.

Despite the stress and discomfort of spending hours in a cramped submarine, Vasili Arkhipov saved the world that day by remaining cool-headed and keeping matters in perspective. As commander of the entire Soviet submarine fleet present that day, he had the sole power to veto the captain’s command. He exercised that power.

Arkhipov wasn’t different from the captain or the crew, all of whom protested the decision at a level that neared mutiny. He had signed up out of patriotism — a quality that leads both to courage and to cruelty. He had spent hours being hounded and bombarded by men he was trained to regard as the enemy. He was angry, murderous, and wanted revenge. It would have been easy for him to change his order and launch the attack.

But he refused. He understood that the safety of the entire world was bigger than his ego and anger, potentially bigger even than the lives of one submarine full of sailors. The entire submarine fleet returned home without firing a single shot.

Arkhipov displayed the good side of this dual nature of humankind. Not all humans do.

This blog post is an excerpt from chapter 1.1 of the book Audit of Humankind.

Since you read all the way to here… you liked it. Please use the Social Network links just below to share this information from The Explanation, Humankind’s Dual Nature Differentiates Us from all other Creatures