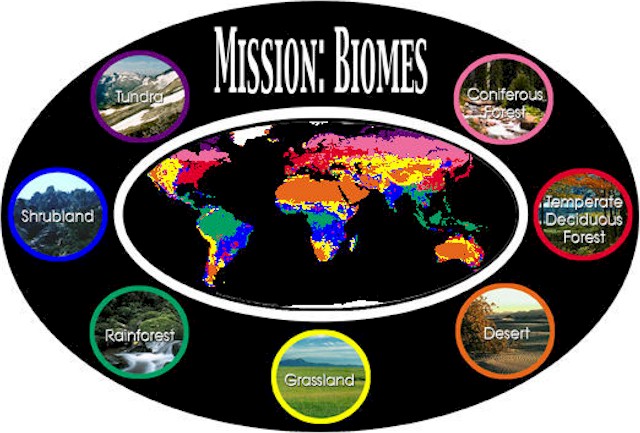 Worldwide biomes, diverse ecological communities of various vegetation and animal life living in symbiosis with the climate and terrain it thrives on.

We’re on Land, touring and inspecting our planet.

Our first postcard reads “Hot in the Desert.” Desert biomes worldwide are formed when wind belts or cold currents rob the area of rain. Our postcard shows that the Western Desert basins in Egypt were formed by wind and are now dry.
(Inventory of the Universe, chapter 4.3.2)

They do support plant life, however, including water-storing plants. Erosion exposes valuable mineral deposits and abundant nutrients. In addition, erosion and winds make arch formations. Valleys such as Badwater in Death Valley form the lowest points on continents. Plants such as cacti, sagebrush, and other endemic flora survive here. Desert animals are varied and abundant.

Galacti has a sample of gypsum-rich desert sand from the Vizcaino Desert in the Baja Peninsula, as well as a sample of ice from Antarctica. This may be puzzling, but icy Antarctica is a desert because it receives less than 254 millimeters (ten inches) of water annually.

A second postcard representing one of the worldwide biomes reads: “Greetings from the Yukon.” Boreal forests or taiga found in North America and Eurasia are characterized by numerous animal species and coniferous plants, such as fir and pine. Snowy mountains and visions of Christmas trees come from this area.

Most flora and fauna in the boreal forest can withstand the worst cold of winter. Nutrients have been leached from the sandy podzol soils (podzol is Russian for “ash”) by water runoff from snows, so the plants that survive, such as black spruce and needle-leaf trees, are hardy.

Another postcard. This time we can actually smell the scene in a 4-D sort of way. It has a chamomile-like smell. The cheery postcard depicts a mountain sheep atop snowy Alpine mountains and bears the slogan “Alp Slovenia.”

The alpine and tundra biomes (mountains worldwide) are found in the coldest regions of the world and have few flowering plants, although there are 1,700 kinds found in the Arctic type of tundra. Inside the alpine tundra soil, where the drainage process works well, there are plenty of nutrients from dead lichens and plants. Bogs provide moisture for plants in the Arctic tundra, but the soil is nutrient poor.

The ever-present nitrogen helps the plant cycle, however. Permafrost covers dark-colored humus in parts of Alaska. The chamomile smell comes from a plant named sea mayweed.

Fresh grass scents waft from the next postcard which juxtaposes an image of horses grazing in an American grassland with a with a photo of a cheetah sitting in tall savannah grasses. The “grassland/savannah forest” biome, which is found in Africa, Hungary, the North American plains, the Pampas in South America, and the Russian steppes, features rich, organic soils with good drainage.

Seasonal droughts and fires aid biodiversity by controlling the insect population, for example. Decomposing organic matter provides nutrients for prairie grasses, which have deep roots. A variety of animals, from lions and antelopes to grouses and jackrabbits, exist in the grasslands and savannah forests. Here’s a Galacti fun fact: Grazing elephants can naturally clear a forest and produce savannahs.

A vintage postcard of a mountain in the American Southwest bears the title “Desert Chaparral.” The chaparral biome is familiar to viewers of cowboy movies, although it’s also found in the coastal Mediterranean. Our audience is interested to see the scrub oak, poison oak, and yucca that grow in chaparral regions as well as the various animals in Australia and the Caspian Sea.

Unusual creatures such as jerboas and sand marmots live there and are able to survive in a region with coarse soils. We can smell pinyon pines and Mediterranean sage.

The next postcard combines two biomes: marine and tropical. The tropical biome is found in Central and South America, Hawaii, Southeast Asia, Madagascar, West India, and Australia. The scents of coconut palms, pungent red ginger, orchids, and salt water emanate from the card.

The print reads “Maldives Tropics.” Tropical biomes in the Indian Ocean, for example, are sometimes located on coral islands such as the Maldives. Many of the forested islands are covered in sandy soil, and some of that soil comes from yellow coral sand.

The tropical rainforest of Brazil draws our attention as well, since Galacti has produced another postcard depicting the floor of an Amazon rainforest.

When looking at the yellow soil of the Amazon and the red or dark soils in which Thailand’s rainforest grows, we’re reminded of how well rainforest trees can grow in thin soils thanks to the plant matter that provides nutrients to thin tree roots in the soil, which is moistened by annual average rainfall of 2,000 millimeters, or 80 inches.

These postcards are more than just vacation souvenirs that we buy and send. Instead, they are reminders to look at the land differently. Each land type sustains different varieties of life, plants, animals and insects, depending on soil and climate.

We muse on the fact that, whatever the season, geographical location, or altitude, all land areas are sublime and accessible for the staggering variety of man’s activities and lifestyles because of our location in space and our atmospheric cocoon.

This is an excerpt from chapter 4.3.2 of Inventory of the Universe.

Here’s a visual Introduction the Biomes of Earth, the many types of places that life calls home.

Here are the biomes with the major Life Zones of Earth … beauty, challenge, variety, biodiversity … this is one of the keys to what Life is all about.

Since you read all the way to here… you liked it. Please use the Social Network links just below to share this information from The Explanation, Biomes. Ecological Biodiversified Paradise for Humankind