Mineral Resources, the Only Reason We Humans can Work with Earth 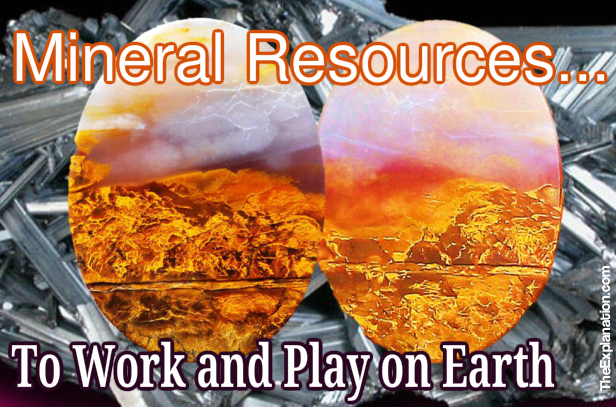 Mineral resources, a majority of just ninety-two elements are the source of our work, play and existence here on Earth. Mineral resources that allow humanity to work and play on Earth. Without them, not only would humans not have any activities … but they would simply not even exist.

Let’s Work with Earth: All Professions

Life isn’t all play. Most if not all adults work in one form or another during their lifetimes, and their activity and employment revolve around and include, directly or indirectly, “earthly matter.”
(Inventory of the Universe, chapter 4.4-5)

We need basic mineral resources and elements to produce the material things around us. Again, we’re talking basic needs. Our spacecraft drill comes in handy once again as it moves to an outcropping of solid rock. It looks like some mountain areas in Afghanistan.

On land, we depend on mineral resources that allow us to house our families in buildings fabricated from mud, tin, brick, concrete, and grass. Our drill unearths tin in order to create a roof for a farmhouse.

Other mineral resources provide heat for our homes and our food in the form of coal, wood, gas, electricity, and uranium, the last of which is transformed into electric energy in nuclear power plants.

These form the support networks for suspension bridges and skyscrapers, as well as ocean-going vessels and many other vehicles. Galacti draws a periodic table with ninety-two elements in order to refresh everyone’s memory about the chemistry classes they’ve taken.

We don’t quiz everyone on the specific properties of each element or which ones we use to create toasters, for example (iron, nickel, and copper play a role). Nor do we detail how research and manufacturing mix and match the periodic table elements from chromium to magnesium to make all different types of compounds from an array of mineral resources.

Another of our audience has just gone off duty as a police officer, replete with a protective Kevlar vest. Sulfur, hydrogen, chlorine, calcium, and sodium create this lifesaving material that can also be used to make canoes, brakes, and even musical instruments.

All the elements that we know of in the Earth’s crust and mantle, whether on dry land or under seabeds worldwide, are the basis of every single object of work and play. Look at a list of categories of industries, objects, and items in the Yellow
Pages or on eBay.

They’ve become so common and abundant to us that we don’t even stop to think of their origin or the processes they undergo in relation to other elements that bring them from the Earth to our hands.

Even those that work with people, such as counselors, teachers, and health support, work with the basic elements of Earth because that’s exactly what you and I, their clients, are composed of.

One of the reasons we’re taking Inventory of the Universe in this first book of The Explanation is to see just how “down to earth” life really is—to become aware of Earth and its implications.

“You see, everything humans are and use on a daily basis comes from the land and the mineral resources underfoot,” Galacti says. “Earth provides and sustains our well-being, even our food,” he says, grinning.

Farmer Galacti, wearing work gear and boots, thinks he’d like to sow seeds in the piece of arable land we’re on. After all, humans living on the adjacent rocky land, which has become an urban sprawl, would appreciate the crops. We depend on harvested food supplies for survival, so human habitations are often juxtaposed with their sustenance supply lines.

We could plant wheat here, and it would take four to six months to grow (depending on soil temperature and whether it’s a spring or winter crop), but future generations living in the rocky land next door would appreciate having a direct line to food crops.

That’s why land is devoted to vital global crops, including wheat, rice, corn, and soybeans as well as hundreds of others in an endeavor to supply adequate foodstuffs. For example, rice fields in Southeast Asia are located near water to irrigate the crops and grow this staple of the Asian diet.

“We talked about trace minerals in the sea,” the police officer says. “I read that they’re in the food we eat.” Galacti offers cans (also made of elements from the Earth) containing a fruit and vegetable juice blend. It’s healthy, of course. It’s made of mixed vegetables and fruits. “This is for later,” he says, “but for now I want you to look at the food label; the ingredient list.

While you do, think about this: the fertile ground under your feet contains trace elements your body needs, such as boron, copper, and zinc.”

We read the ingredient list and notice that there is a space to detail all the minerals in the juice: calcium, iron, phosphorus, magnesium, zinc, manganese, and potassium.

While we drink the juice, a nutritionist in the group remarks that all these minerals exist in infinitesimal amounts, but they are abundant in soil, and can be absorbed by plants that provide sources of food.

Today we know that these minerals are vital to human health. For example, potassium helps control blood pressure, while zinc boosts the immune system and can treat ear infections. Minerals are only a fraction of our total body weight, if that, but they prevent disease and deficiencies of them lead to serious conditions.

For example, one of our group members, a grandmother, has osteoporosis. She knows she needs to eat calcium, but she’s surprised to learn that a boron deficiency may also make her bones fragile.

In fact, we know that our bodies include about sixty natural elements, six of which (oxygen, carbon, hydrogen, nitrogen, calcium, and phosphorus) make up 99 percent of our weight, with another five (potassium, sulfur, sodium, chlorine, and magnesium) representing a tiny 0.85 percent.

The rest are trace elements found in infinitesimal quantities, including radium, strontium, and uranium (considered radioactive) as well as mercury, lead, and arsenic (considered poisonous) and even gold, among others.

“You humans are not the only ones that need nutrients and mineral resources from the land,” Galacti says, turning over a layer of soil and revealing several wriggling, squiggling earthworms.

This is an excerpt from chapter 4.4-5 of Inventory of the Universe.

A very instructive documentary about mineral resources and their impact on humanity. From Ages past and their mysticism to our modern usages as the underpinnings of our material world.

Since you read all the way to here… you liked it. Please use the Social Network links just below to share this information from The Explanation, Mineral Resources, the Only Reason We Humans can Work with Earth