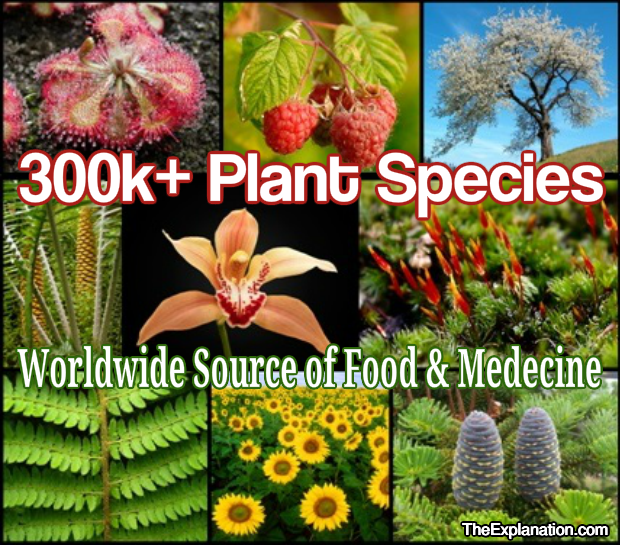 Plant species are particular not only to continents, but to countries, areas and soils. Amazing biodiversity.

300,000+ Plant species worldwide are particular not only to continents, but to countries, areas and soils.

We examine the field. A soil sampling kit shows us that the soil is full of essential minerals and is not depleted. Galacti has cleared the field to make room for plant species from every region of the world. Just as he brought a glacier into a desert, Galacti has procured “flats”—(which are plastic divider trays of plants used by garden shops and greenhouses) and pots of plants for us to transplant into the soil.
(Inventory of the Universe, chapter 5.3.1)

These three companion plants encourage each others’ development. Corn plants support the bean vines trailing everywhere, while the squash prevents weeds from growing. In addition, we can see that the beans provide nutrients while fallen squash leaves become a natural mulch to protect the soil and conserve water.

Think about the Native Americans who practiced farming these crops as a team, sustaining themselves and growing these three plans unique to the region. Simple interaction among the plant species seems incredibly complex. How do they complement each other so well?

In addition, the pole beans provide the soil with nutrients. We are now on the hunt for other examples of plant interactions. “Mexico, Central America, and South America,” Galacti says before we even have a chance to inspect the diversity of vegetation. Instead, we are planting coffee plants from South America, maize from Mexico, avocadoes, chayote, yucca, navy beans, potatoes, black beans, breadnut, tamarind, sapodillas, and cassava as well as a host of plant species from the Amazon rainforest.

We have heard that one-quarter of all the medicines we use in the world have ingredients from the tropical rainforests.

However, as we’re inspecting the cinchona tree, from which the malaria drug quinine comes, we notice that the cinchona trees do not grow close to each other. Rather, they may grow next to a tamarind fruit tree or a papaya tree.

This is nature’s defense. We see when we cut into the cinchona bark that it’s diseased and could spread the infection to other cinchona trees, depriving people of malaria medicine.

One of our travelers, a woman, has had malaria. Intrigued, she remarks upon the biodiversity that can save plant species and lives. This arrangement seems particularly prevalent in the rainforest.

“Europe,” Galacti says, directing the plants from that area to a slice of land surrounding North America and South America. We plant lingonberries, peas, rapeseed, durum wheat, quince, gooseberries, olive trees and pomegranates from the Mediterranean as well as Russian apples and Siberian tea plants.

We fixate on the European alpine plants in particular. Around 13,000 plant species, which survive a short growing season and even thrive in cold conditions, are native to the Alps and nowhere else on Earth. These plants include edelweiss (made popular by the song from “The Sound of Music”) and Alpine dwarf orchid. Edelweiss in particular is fascinating because it grows at altitudes from 1,500 to 2,500 meters in light, porous soil.

The soil of alpine regions has both these attributes. Edelweiss is a symbol, a song, and a food for the Alpine ibex, another species that thrives nowhere else on Earth. We think of Europe as a place of heather, shamrocks, English roses, and the bounty in my own home country of France. The alpine plants change the picture in our minds, however, as does another signature plant from the Mediterranean.

Olive trees, which are originally native to Europe and have since been transplanted to warmer climates in America, among other regions, have a long lifespan. The olive is, in fact, a fruit, but the trees are not noteworthy for that fact alone. They’re among the oldest plants mentioned in literature.

Interestingly, the olive tree is associated with just a handful of areas in Israel and the Mediterranean, and is originally thought to have descended from fruit trees in Africa or brought by the Phoenicians. The olive has been a symbol of peace and civilization in Greek culture, and it provides food as well as traditional medicine for humans.

Ancient Greek philosophers used to swear by a spoonful of olive oil as a curative. What is especially noteworthy as we examine the olives is that each tree bears two crops. There are fully ripened olives that we can taste and touch, which alternate with budding olives that will ripen next year.

This is an unusual arrangement, and it could only be facilitated by nitrogen-rich soils of low-to-medium fertility to nurture the olives (African and Mediterranean soils are low-fertility). Again, how can the fruit of Western civilization originate and take root in a soil that suits it best?

Asia occupies a corner next to Europe. We press into the ground exotic specimens such as Japanese persimmon, mangosteen, rambutan, lemongrass, lychee, longan, lapsang souchong tea plants, white rice, ginseng, and orchids. We notice that the orchids from China in particular give off a scent that attracts dozens of hornets.

To locate the honeybees, the hornets of the island of Hainan in China tune in to the pheromone alarm smell. Just as several orchid species can make themselves smell like female wasps or bees in order to attract male wasps and bees, the Chinese orchids know exactly what scent signals to emit in order to gain the desired result: pollination.

Surprise! How can these orchids with their appealing petals and seemingly fragile appearance lure hornets efficiently by producing a particular scent when the orchids themselves look nothing like honeybees? Were it not for this scent trap, the orchids would have a difficult time surviving.

We notice that several hornets visit the orchids from Hainan and come away, taking the pollen with them on the journey to seek other orchids. This ritual impresses upon us that plant species in each region find different ways to continue their species!

This is an excerpt from chapter 5.3.1 of Inventory of the Universe.

Earth’s major life zones characterized by the variations of quantity of water, from much in rainforests to little in deserts and temperature from high in the tropics to low at the poles. We have a lot to learn from biomes and plants.

Biomes of the World for Children … and Adults: Oceans, Mountains, Grassland, Rainforest, Desert …

Since you read all the way to here… you liked it. Please use the Social Network links just below to share this information from The Explanation, Plant Species in a World Demonstration Garden