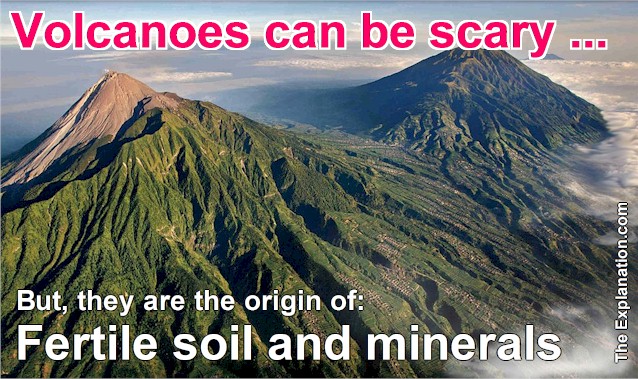 Volcanoes spew out soil fertility and minerals from trace elements to diamonds. The screen you’re looking at is soil.

Volcanoes can be scary but it is at the origin of soil and mineral deposits that supply all of mankind’s needs.

In our land/apple analogy in the previous post, we “discarded” a good part of the land because it is mountainous, snowy, occupied by urban areas, or inhospitable like the land located in the vicinity of the cold poles and hot deserts. Yes, there’s much less agriculture going on there, but these so-called “discarded” areas have other valid purposes. They are vast playgrounds for man.
(Inventory of the Universe, chapter 4.3.1)

They can be areas of both great hardship and immensurate pleasure. Places of contemplation, of beauty, of discovery, and of sporting ecstasy are always learning opportunities, since all the natural formations on Earth never cease to amaze us.

We overlook the orange glow from a lava lake as we gather at an observation point high above the Halema’uma’u Crater in the Kilauea volcano, which is located on the Big Island of Hawaii. Galacti consults with a ranger at the Hawaii Volcanoes National Park and tells us that the plume of gas and steam reaching from the crater up to the sky is coming from a volatile 500-foot-wide vent. Many of us have read that the Kilauea volcano, which attracts travelers from around the globe, is the world’s most active volcano.

Thanks to a special telescope Galacti provides, we can see the orange light from the lava lake inside the crater, but we cannot get closer—not yet. Even with Galacti as our guide, we dare not go anywhere in the lava fields without protective clothes. We all find a private place to changeinto heavey boots, jeans long-sleeved shirts, heat-reflective jackets, heat-reflective gloves, helmets, and gas masks.

I can travel through time and explore a wide range of journeys humans can’t, but man’s life activities seem to revolve around four themes: working, eating, sleeping, and playing.

‘Playing’ or playful behavior in humans encompasses a range of what Sam and our audience experts call “socio-intellectual” activities: reproduction, family, friends, study, reading, personal development, entertainment: this, along with the other three themes, is a resume of our lives. It seems like a short list.

Is that all there is to human life? Wait and see. I could learn something too! Let’s delve deeper.

Now that we are prepared and equipped like geologists, Galacti takes us to the other active region of the volcano, the rift zone along the Pu’uO’o vent. We study and watch in awe as the fountain of lava flows from this eastern lava tube, even as we’re mindful of volcanic gases with high sulphur content blowing our way.

“A volcano is the perfect place to visit to show you the process of land being formed,” Galacti explains. “We can visit other places, such as the Kalahari Desert, the African savannah, the tundra in Siberia, the chaparrals in Mexico and the American Southwest, boreal forests, and grasslands.

However, here in tropical Hawaii, in the thick of a tropical rainforest, we can actually see basalt lava hardening into land.

As we watch, the slow lava flow hardens into fresh a’a, one of two types of lava in the islands. A’a is jagged, uneven, and sharp, while pahoehoe is generally wavy, smooth, and flat—almost sculpted. When pahoehoe flows into the ocean, it quickly cools into black glass, shatters, and accumulates at the edge of the “submarine slope” along the coastline.

Other lava flows settle on the foundation provided by these uneven fragments, and a new unstable lava delta is formed.

One of our trekkers sifts through black volcanic soil and collects a sample. Galacti produces a snack of yellow mangoes from the farmers market in the town of Volcano. As we bite into the mangoes, we’re tasting the benefits of the nutrients in the crumbly, fine volcanic soil.

Hawaiian lava is produced when heat wells up from Earth’s core and melts crystals from the lower mantle and crust. The lava contains nitrogen, iron, magnesium, phosphorous, and of course sulphur (which we’re avoiding breathing). As the group remembers, nitrogen is essential for plants, including the mangoes we’re enjoying.

Returning to the crater overlook, we view digital images of other volcanoes worldwide: Indonesia’s Mount Merapi (which we can hike), Mt. Kilimanjaro in Africa, Stromboli in Italy, and Uturuncu in Bolivia. We’re aware that we’re fortunate to be at Kilauea, which is considered the “drive-up” volcano of the world due to its relative safety and ease of access.

This volcanic zone is one of five on the island, although several are dormant. One of our travelers points out that this island has eleven of the world’s thirteen climate zones as well as different landforms.

“It doesn’t have the African savannah,” Galacti notes as we view picture postcards from the universe showing the different biomes, or ecosystems. A lot of these correspond to the inhospitable, variegated, and often spectacular parts of the “land apple” where arable land is not the norm.

We’re witnessing the space, atmospheric, and water processes from the last three chapters combining with the land processes to give Earth its extremes and everything in between—from the bitter cold at the poles to the ardent heat at the equator.

Extremes, yes, but very mild compared to interstellar bodies and fully within man’s capacity to live on and visit, even for a very short time, whether it be the world-record-setting sweltering furnace of Death Valley in the United States (measured at 56.7 degrees Celsius) or the biting iciness of Antarctica at −89.2 degrees Celsius.

As we go about our daily business without giving it much of a thought, land, with volcanoes, is indeed the ideal habitat for mankind.

This is an excerpt from chapter 4.3.1 of Inventory of the Universe.

Volcanoes are as dangerous as they are majestic. Over 50 eruptions rock our planet every year. This video from National Geographic helps you understand what causes volcanoes to form and erupt—and shows where they are most likely to be found.

This next video about volcanoes unlocks the mystery of this worldwide majestic phenomena. They are part of the land piece of our puzzle: Inventory of the Universe

Since you read all the way to here… you liked it. Please use the Social Network links just below to share this information from The Explanation, From Volcanoes to Soil. Let’s Master Wondrous Earth