Unique Brains and Minds for each Human, but Brain and Mind Unity in Human Diversity 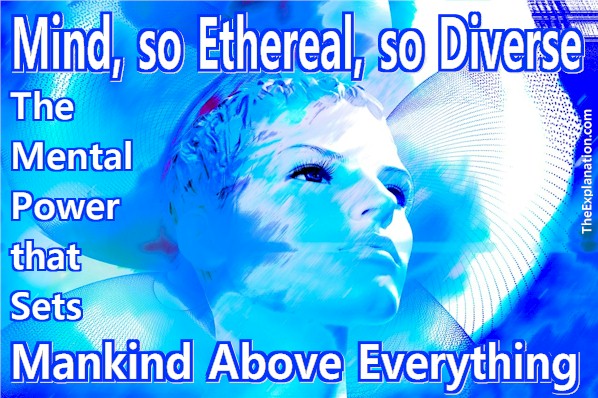 Unique brains and unique minds characterize each and every human being. At the same time, there’s brain and mind unity in human diversity. The mind, so ethereal, so diverse. The mental power that sets mankind above, way far above, everything else.

Look around at the adults and teenagers in this room. We hail from a variety of countries and cultures. Imagine that we all have our brains analyzed by the equipment in this room. To the untrained eye, the pictures might look like just a series of brains. Each of our brains is unique, however.
(chapter 9.8-9)

The seven billion people on the planet, which are represented by the sample tour group in this room, are all similar yet diverse. We are alike, but my physical appearance is different from that of someone standing next to me.

I also speak a different language and have a different accent. We are alike, yet the person standing next to me has a different psychological makeup than her neighbors. She also comes from a different culture with different interests.

Whether it’s a white baby born among the advanced technology of Scandinavia, an Asian baby born in the remote mountains in Outer Mongolia, or a black baby born in the deep jungle of tropical Africa, they all have identical critical periods and the same genetic worldwide propensity. There is brain unity in human diversity.

There is brain unity in human diversity no matter your race, country or religion. Click To Tweet

Whether it’s a white adolescent in the outback of Australia, an Asian adolescent in the bustle of Hong Kong, or a black child warrior in Nigeria, their neurons are pruned away in the same critical period. They have the same genetic worldwide propensity. There is brain unity in human diversity.

Whether it’s a white adult in the city of Vancouver, an Asian adult on the banks of the Mekong in Vietnam, or a black adult in Jamaica, their neurons are now stable and they all have to go through the same arduous process of reorganizing their neurons in order to acquire new skills.

There is brain unity in human diversity. We have been told that “we are all one,” but we ponder the truth of that statement here in this room. Is there an underlying message we should be getting? Is the universal brain telling us something that we haven’t grasped yet?

Why do all brains experience identical critical periods despite differences in sex and race? Why is it that the woman next to me, who was raised in Malaysia, has the same lifelong patterns of brain processing?

Why do all brains experience identical critical periods despite differences in sex and race? We have the same lifelong patterns of brain processing. Click To Tweet

You might well say that we think different thoughts in a sense because our experiences are different, but we are alike in cognitive activity. Is it because we are all humans? Surely, but is there something more at work?

We are back inside the scanning machines. We have come to a more nebulous aspect of our examinations: cognition, a multilayered process. We are all pondering the fact that we think. What exactly does that mean?

We could launch into an extended philosophical dialogue or debate, but to simplify, we’ll define cognition as that which deals with thoughts, including our intentions, imagination, perceptions, feelings and desires, critical thinking and analysis, reasoning, and judgment. For plainness, let’s associate all of this activity with the ‘mind’.

Galacti is a bit confused. What exactly is the mind? We can see the brain on our scans with the neurons firing. However, can we detect the mind in those pictures made of particles? To be fair, this question has baffled scientists as well!

Scientists have not yet pinpointed what the mind is, but for them it is a physical part of the brain. Other thinkers feel it could be an entirely different entity that exists apart from our neurons and brain tissue.

We can see the physical brain on the scans and in illustrations. We can touch the cortex tissue of the brain, which is perched on a pedestal in the lab. We can touch and examine the cortex. However, even Galacti’s capabilities won’t allow us to see and hold an elusive mind.

Galacti’s time-travel powers bring the French philosopher René Descartes from the beginning of the seventeenth century. Descartes seems a bit confused about all of this, but he decides that he is dreaming!

He is unafraid to launch into a philosophical argument and happily proposes that the mind is a nonmaterial component existing outside of but interacting with brain activity.

Descartes is introducing the concept of dualism, which set the stage for the mind-body controversy that started in Descartes’ time and still rages today. We will ask Galacti to usher Descartes out and apply our mental powers to this question of mind.

This concept of dualism, or a separate body and mind, is different than monism, in which the mind is part of the body (specifically, the brain). Monism argues that brain and mind are one and the same, and that the mind can be accounted for in terms of the physical function of the brain. If we take this to an advanced philosophical level, we come to the concept of determinism.

We broach this topic for a specific reason. Whereas dualism indicates that the mind is immaterial and therefore can choose (thus exercising free will), monism identifies the mind as part of the brain, a material organ, as if the mind were a program running on hardware.

Everything is predetermined in monism, and the brain maps for the rest of your life are already written. There’s no choice, and hence no free will. Everything is written in advance and cannot be changed, no matter what you do.

Even our time-traveling tour guide isn’t sure which argument is correct, so the mind-body controversy churns on and the debate of free will versus determinism ferments passions.

I could choose to say “Explain one and the explanation of the other will become clear.” We shall return to this subject.

We’ve delved into the philosophical, but we’re trying to make practical sense of these ideas. While we’ve explored brain activity, our thoughts still defy identification. We poll the group and collect some additional ideas to define the term “mental.” The consensus is that the definition is “Of or relating to the mind. Intellectual and mental powers.

None of these actually tell us whether a thought is a thing, that is, whether it can be measured and whether the neurons in the brain scan produce mental processes.

This post is an excerpt from chapter 9.8-9 of Inventory of the Universe.

In this video cognitive neuroscientist Rebecca Saxe and Piya Chattopadhyay discuss what the difference is between the brain and the mind. The beginning of this is very interesting because Rebecca Saxe points out that there’s clearly an interactivity between the mind and the brain, if I put it another way, the thoughts and the brain actions and, as she says, we don’t know how this works.

I would add that she talks about 2 methods to study the brain and mind: MRI and EEG. Both of these methods allow us to see brain activity, what’s happening on a physical level. Neither allows us to peer into the thought level … only the results of our thoughts as they ‘hit the brain’. It’s that interactivity between the two that is still a mystery to scientists.

Since you read all the way to here… you liked it. Please use the Social Network links just below to share this information from The Explanation, Unique Brains and Minds for each Human, but Brain and Mind Unity in Human Diversity