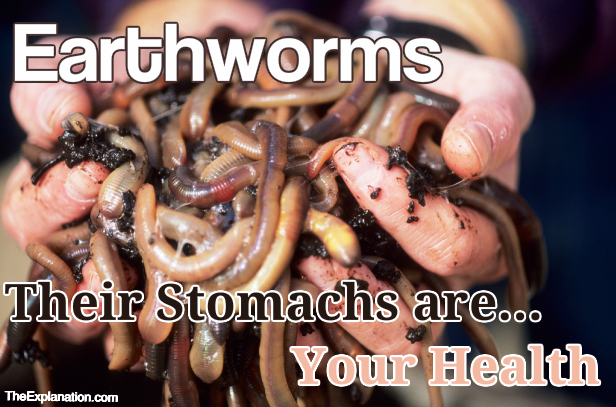 Earthworms and healthy arable land go hand in hand. You can’t have one without the other.

Earthworms and healthy arable land go hand in hand. You can’t have one without the other.

Everyone takes a moment to contemplate the earthworms. At the best of times, they barely seem worth noticing, and yet our travelers recognize that worms are good for the soil. But how good are they?
(Inventory of the Universe, chapter 4.6-7)

Earthworms feed on decomposing greenery, which contains a wide variety of trace elements and minerals. During digestion, earthworms are equipped both chemically and physically to produce a natural fertilizer that conditions the topsoil for the best root growth.

Burrowing worms condition the Earth for correct proportions of water and all the elements required from the Earth to be absorbed by roots for optimum plant nutrition, and subsequently animal and human health.

Although earthworms may not have ears or eyes, and are simple creatures that breathe through their skin, science acknowledges them as invaluable for working the land. Galacti is our premier worm expert. “Imagine if you give them and acre of land, like this field, and plenty of organic matter like dying plants or compost.”

Galacti pauses and orders in a steam shovel. It scoops away the topsoil, revealing countless earthworms burrowing in the next layer as dead leaves slowly disappear into their stomachs. The body of earthworms are, in essence, one elongated stomach.

The earthworms shy away—they can sense light and they’ll avoid it. Our travelers put up a canopy that shades the field from the sun.

“When conditions are ideal with the right amount of moisture, like they are here, there can be up to 4,400,000 earthworms per hectare (2.5 acres). These worms will bring about twelve metric tons (about 12 tons) of fertile material to the surface in a year,” Galacti finishes. “They’re called megadriles, which sounds like ‘mega-drills’ but actually means ‘big worms.’ They are just like the mechanical drill.”

The worms in the field burrow through the soil, leaving behind balls of dirt called casts. One of our travelers, who knows something about farms, says these casts contain higher levels of nitrogen, phosphorous, and potassium than the surrounding soil.

These trace elements, says our farm-friendly traveler, are the products of digested organic matter and more trace elements brought up from deeper levels. The casts help neutralize the acidity or alkalinity of soils to grow plants, which is why farmers like to use worm casts as a fertilizer and soil conditioner.

Galacti interviews one worm specimen that happens to be burrowing next to a root and excreting castings there. After consulting his worm translator device, Galacti says, “The worm has just eaten nutrients found in the deeper soil, or subsoil.”

However, he’s also excreted what he doesn’t want. To him, the dirt is ideal for his needs because the plants usually take all the nutrients from the humus, so he has to tunnel deeper to find nutrient-rich soil.”

What the worm doesn’t know is that every time he consumes soil, he excretes nutrients and enzymes in the castings. These enzymes and nutrients make their way to the root of whichever plant is growing in the field in order to feed the plant, assist its growth, and ultimately become absorbed into our bodies when we eat it.

Grazing animals also benefit from this process because they absorb nutrients. Remember, the sixty elements we’re composed of come from the plants we eat or the animals that are part of the food chain.

“Nutrients aren’t the only thing earthworms produce,” Galacti says. “Look at them tunneling to different depths. They’re mixing different types of soil so that there are more nutrients. Also, if you water this field the way I’m doing, the worms will aerate the soil so that the dirt filters and absorbs the water.

Otherwise, this would all be mud and the minerals would be leached away. Instead, it’s draining and the plants are absorbing a quantity of it. The worms are like nature’s irrigation system and soil doctors rolled into one.”

We have an agricultural researcher in the group to confirm this. When asked why she has been silent, the researcher says she is just enjoying contemplating the land, and points out that this food-producing landform is much different from the postcard “play ecosystems” we visited, but it is an important landform nonetheless.

We’ve stayed quite a while giving respect to one of Earth’s most underappreciated creatures, but the earthworm wouldn’t exist without the ideal conditions provided by the land, and indeed, vice versa. It’s another one of those “which came first?” conundrums.

We take down the canopy and the steam shovel replaces the topsoil. The tools remain in case we need them again, but for now we are off on our next discovery.

From a human perspective, arable land is the most essential ecosystem. Along with oxygen from the atmosphere and water from precipitation, food from arable land is vital for man’s survival.

Farmland or agricultural land is used for growing what sustains life. Its size is irrelevant and can be from a small home plot to a multi-hectare industrial farm. Kitchen gardens in the yard, on the roof, on a balcony, or beside high-rise apartment windows qualify. You can grow spring onions, radishes, greens, or herbs like basil or mint.

A lot is possible depending on the arable space available. While we think in terms of big farms, annual crops, and livestock, Galacti reminds us that worldwide cultivation of the land is more of a family activity with various community benefits.

These include much more interaction at local markets as well as environmental benefits such as less transport, less storage, and less waste. Other benefits include economic development and better health.

Arable land, from the small plots made available to retirees and families to the larger biological and environmentally friendly farms, are welcoming back earthworms so that one-tenth of the thin slice of the land-apple can support and healthily feed the populous billions of this world.

Look at this arable field, this postcard biome. You see an ear of corn, a blade of grass, flowering broccoli, needlelike asparagus, and leafy lettuce. All of this depends on the sun’s rays from space, the oxygen and carbon dioxide cycle in the atmosphere, the water from the rain cycle, and the topsoil cycle from the land.

They are the result of the universe and the pillars of life support, with innumerable interconnected sophisticated systems all working in harmony to give you the yellow-orange tulip, the green sprout of wheat, or the majestic oak tree.

Imagine that and begin to think big. Think global now that you’ve turned some of the jigsaw pieces right side up and linked them together.

For now, Galacti notes, these puzzle pieces form a postcard sent by the universe. After all the exciting “play and eat” postcards about various worldwide ecosystems, the final one bears the caption “Planet Earth—Continue the Journey!” It’s an invitation we can’t refuse.

This is an excerpt from chapter 4.6-7 of Inventory of the Universe.

Below are a couple of videos. The first one for kids and the second one is a documentary. At the end there’s a section showing the extraordinary power of some worm parasites to actually control other insects. Quite amazing.

Since you read all the way to here… you liked it. Please use the Social Network links just below to share this information from The Explanation, Earthworms: Natural Fertilization for Arable Land