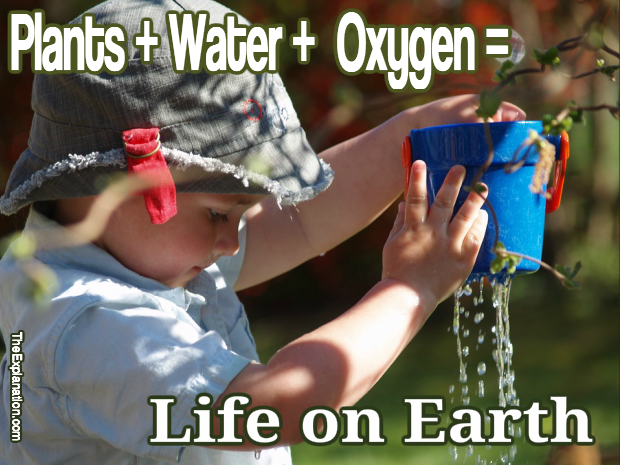 If it weren’t for plants and water, which produce our nutrients and oxygen, there wouldn’t be any life on Earth. If it weren’t for plants and water, which produce our nutrients and oxygen, there wouldn’t be any life on Earth.

We’re standing in a field of barley plants next to another field of green wheat crops and a third field of plain dirt on the other side of the wheat. The order seems to be barley, wheat, then fallow field. One of our travelers spots a rice field on the left side of the barley field. Flowering shrubs and trees border the perimeter of the croplands.
(Inventory of the Universe, chapter 5.1-2)

Galacti, the farmer, and his farm-wise assistant from the traveling group survey the rice and wheat crops with pride. These are just two of the 1.7 million species of plants classified by scientists.

Our adventure chronometers tell us that we have arrived at the early April barley harvest. The barley, which was planted in August, now ripens. It is an unusual winter/early spring cereal crop. Now mature, the barley looks similar to the wheat, but the wheat in the adjacent field is not yet ripened.

The term “Vernalization” in regard to plant seed means the spring season, or the maturing and harvesting that follow a dormant period, even through a freezing winter. This is essential for development of mature kernels in grains. There’s a fall to spring growing season, where thawing can actually trigger sprouting. This method is much less known than the chief spring-to-autumn plant development cycle, which is shorter.

We continue to catalog some extraordinary and even contradictory elements of our surrounding environment. We’re now into the “living elements,” starting with seeds that contain an embryo of plant life. These seeds have enough storage food for germination and first growth encased in a protective outer coat. This seed can lie dormant for years, but under the right conditions of heat and moisture it germinates.

Its roots push down to soak up water and nutrients and its stem pushes up to bathe in light and energy. Welcome to the world of flora. Let’s begin our exploration of life.

The barley crop draws our attention again. It looks humble when planted in the soil we’ve explored, and yet it is necessary for life. It is nutrient rich and delicious as a cereal, and it is also fascinating because of its natural design.

We harvest the ripened barley with scythes. Galacti digs around in the dirt, burrowing eight to ten inches to expose the barley’s root system: a wandering mass extending deep into the earth and sucking nutrients and moisture from the soil.

Through x-ray glasses, we see inside the unharvested barley as nutrients and water defy gravity. They make their way up the barley stalk to the hard-shelled kernels and the nutrition filled barley leaves.

How can this be, we wonder? Even our farm expert has no Explanation for it. In fact, it never crossed his mind, even during high school biology when he learned about plant tissue. We know roughly how it works, but we don’t know why it works.

Why do water and nutrients travel upward when the force of gravity normally pushes them down into the soil? Without the water traveling throughout the plant tissue, the barley plants could not survive.

As we harvest the barley with scythes, we cut a barley stalk and examine it under a microscope. We can see the xylem cells that conduct the water through the barley. Rainwater or groundwater from the soil gets absorbed into the roots through tiny hairs, after which it travels through the roots that anchor the plant in soil.

Inside the root tissue, veins called xylem form one continuous pipeline to circulate the water upward into the plant.

The interesting part of the process is that the xylem cells, many of which are dead, have a two-part task: in the root, they must resist forces that can pull the plant out of the ground through the flow of water, and in the stem they have to push against the wind and the weight of the plant, which compress and bend the stem. Osmosis steps in and makes the concentration of water across the plant equal.

Having a fuzzy idea of how it works doesn’t stop us from pondering. How can it be so? How can the process be so precise when the water molecules are heavier than air and gravity would normally keep them in the earth? And how do these tiny tubes carry water up to the leaves? It’s a point to stop and ponder. A tree does not have a brain that can solve its difficulties, and yet it somehow manages to thrive.

Another question: where does the water go afterward? We have a bit of a clue as to the answers, since one of our travelers is mopping his face with a napkin from the Water Cycle Café. In chapter 3 we talked about the transpiration part of the water cycle and how water is released into the air.

We watch through our x-ray glasses as tiny pores in the leaf of a barley plant seem to draw water drops up the plant stem, into the barley kernels, and also out through the pores (which are called stomata).

The water droplets fascinate us: one moment they are trapped in the barley stalk making their way upward, and the next they appear on the leaf as if through a nature made leak. After a short time, they evaporate into the air.

Only a fraction of the water that passes through the barley is actually stored in the plant. How does this happen? Our farm expert notices an important clue: the sun is heating the barley, supplying energy. This causes the water to rise, and then to evaporate once it reaches the surface.

“I never thought about this before!” someone exclaims. “It seems so simple, but there are so many steps to it. How do they do that? Knowing how doesn’t take away the mystery. Why do they do that?”

Galacti lets us in on an interesting fact while we’re considering that question. “The rice and barley and trees are holding back water loss from the soil,” he says. “Without the barley and the trees retaining moisture, the sun might draw all the water from the soil, where it would cause no benefit to anyone and put a lot more water in the air.

However, the plants themselves benefit because they draw more water. They release the right amount into the air for the survival of life on Earth.”

We as travelers never stop to think about how or why plants use water. It seems automatic, like the plumbing in our homes. Consider that we humans have to be reminded to water plants. It’s an efficient process, and one that we appreciate as we feel the moisture in the air. Transpiration is also responsible for that very air.

While we’re harvesting, stop and take a minute to notice the air we’re breathing. Notice the act of breathing and having oxygen in our lungs. In large part, we owe this gift to the surrounding trees as well as the barley and rice plants.

We talked about oxygen when we traveled through the atmosphere, and we spoke about the trees above our heads, taking in carbon dioxide and giving off oxygen in return.

Barley, incidentally, can release carbon dioxide when malted into beer. We won’t recap the carbon dioxide/oxygen cycle here except to make one particular point: The natural atmosphere is composed of just 21 percent oxygen. Where, then, do our travelers get the oxygen that is traveling down their windpipes?

Our farm expert literally holds the answer in his hands as he clutches the cut barley.

“Without plants, we wouldn’t have any oxygen,” he remarks. “I do believe that’s right.”

“Plants are responsible for renewing 50 percent of the oxygen on Earth,” Galacti says. “In fact, if I were able to take you back in time and show you the Earth before plants, you wouldn’t be able to breathe. There would be no oxygen in the atmosphere.”

“Plants control carbon dioxide as well,” someone else points out.

“Then those plants, over there near the empty field, must control a lot of it,” I say, seeing a unique assortment of plants right by the fallow field.

This post in an excerpt from chapter 5.1-2 of Inventory of the Universe.

Plants are so common that we don’t give them much of a second thought. This video starts by pointing out that they are the only thing on earth that ‘produces’ anything. Man only ‘transforms’ raw materials. Worth a watch.

Since you read all the way to here… you liked it. Please use the Social Network links just below to share this information from The Explanation, Plants & Water & Oxygen = Life on Earth