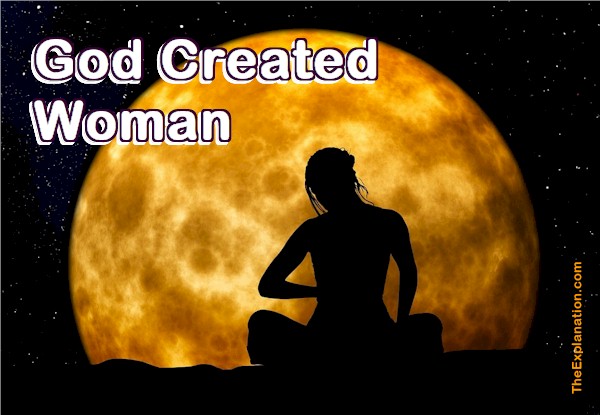 God created woman. In so doing, the drama reveals God’s Plan for the future of Humankind.

God created woman. He told Adam He was going to create a help meet for him. Adam has named all the animals, and there’s not one that could serve as his mate. Here’s the narrative of her creation.
(Origin of Woman, chapter 2.3)

Did you realize there are more verses devoted to the creation of the woman than to the man (7 to 1)? Why? Among other reasons, her creation represents the spiritual creation of the Church (Ephesians 5:32 as I’ve explained). It’s also an enactment of the Plan of God to save humankind. It’s the Gospel, the Good News, preached on the sixth day of Creation, four thousand years before the First Coming of Christ.

Personally, It is one of the most poignant testimonials to the inspiration of the Bible. This narrative has been sitting in front of us for six thousand years, 560 hundred years since Gutenberg printed the first Bible, 111 years since Gideon started distributing them free around the world. And, to my knowledge, the full meaning of the creation of woman has not been fully understood.

Its simplicity and parallel with New Testament events have escaped the most critical Bible scholars. Beyond the incredible creation story of woman, here is evidence of coherent completeness of this sacred book as you’ve never seen it before. The Bible tells the same story in both the Old and New Testaments. Written 1400 hundred years apart by authors who had never met and never concerted to write the plot together. Here it is, in plain BIBLICAL HEBREW. NOT in your native language. That’s why we have to get into the original language.

22 And the rib, which the LORD God had taken from man, made he a woman, and brought her unto the man.

Question: God could have instantaneously and painlessly removed the man’s rib? Why plunge him into a deep sleep? Question: Since God did plunge the man into a deep sleep, why does it have to reinforce this point with “he slept.” After all, if God causes you to sleep, it will happen. Readers don’t ask such silly questions. Well, you should.

Here’s the kicker. The words sleep/slept, identical in English are TWO DIFFERENT WORDS in Biblical Hebrew. Yes, I put that in full caps to emphasize this point that it is IMPOSSIBLE to see in English. That’s why we’re using the original language as the basis for our study. What’s the significance of using two different words for sleep?

Before I answer those questions, I want you to realize that something prodigious is occurring here. A disproportionately large space is devoted to when God created woman AND mysterious details light up the narrative. Here are the two Biblical Hebrew words translated sleep in English.

יָשֵׁן yâshên yaw-shane’; a primitive root; properly, to be slack or languid, i.e. (by implication) sleep (figuratively, to die); also to grow old, stale or inveterate:

These two words have DEATH in common; this is a symbolic representation of sleep. The figurative meaning is one of the keys to master Biblical Hebrew. God did not need to put the man to sleep! The author of Genesis did not need to use two different words for sleep to get the point across. I hope you’re able to put two and two together. The sole reason for this staging is to show that symbolically the man DIED. Are you understanding? The first man died to prefigure the Second Man, Jesus, who would die 4000 years later!

Next, God took a rib. No, he did something BEFORE that. God first cut open the man’s flesh. How do we know this? Because it says, God closed up the flesh. To close up, you first have to open up. Look at the Biblical Hebrew for close up.

After removing the rib, God repaired the wound. Again, God could’ve taken a rib withOUT opening up the man’s side. What does this signify?

I consider that The Explanation has demonstrated from the Bible that when Yahveh God created woman, prefigures the New Testament Christ creating the Church. The first man slept, the Second Man died. What happened immediately AFTER the Second Man’s, Christ’s, death by crucifixion?

30 When Jesus therefore had received the vinegar, he said, It is finished: and he bowed his head, and gave up the ghost.

31 The Jews therefore, because it was the preparation, that the bodies should not remain upon the cross on the sabbath day, (for that sabbath day was a high day,) besought Pilate that their legs might be broken, and that they might be taken away.

32 Then came the soldiers, and brake the legs of the first, and of the other which was crucified with him.

33 But when they came to Jesus, and saw that he was dead already, they brake not his legs:

34 But one of the soldiers with a spear pierced his side, and forthwith came there out blood and water.

35 And he that saw it bare record, and his record is true: and he knows that he saith true, that ye might believe.

36 For these things were done, that the scripture should be fulfilled, A bone of him shall not be broken.

37 And again another scripture says, They shall look on him whom they pierced.

Christ died and the very next event was a soldier pierced His side. Once again, Christ was already dead. Was there any need to pierce His side? From a prophetical and spiritual point of view, the answer is yes and yes. Prophetically, Yahveh opened up the side of the first man, and the soldier opened up the side of the Second Man. Notice that both were dead BEFORE the opening up. Christ GAVE His life for us; Nobody TOOK Christ’s Life! The debate about who killed Christ, the Romans or the Jews, is a moot point.

While we’re in the context, John 19:34 states that blood and water issued from Christ’s side. Let me ask you. If an individual were pierced, what would YOU see coming out of the side? You’d see blood; you would not be able to distinguish water. So why is water mentioned? Let me first mention another significant event that took place at the same moment; the ripping open of the entrance curtain (Matthew 27:51) to the Holy of Holies in the Temple. The significance of this miraculous event is the ability to REenter the presence of God. Christ’s death removed that barrier.

Spiritually, people could now REENTER the Holy of Holies, which symbolizes the  Garden of Eden. Those people are the ones who ENTER the CHURCH that God established by His death. HOW do you ENTER God’s CHURCH? You REPENT of your sins which are paid for by the BLOOD of Jesus Christ. And you are BAPTISED in WATER for the washing away of those sins. BLOOD and WATER (Acts 2:38). Christ’s death and the outflowing of blood and water demolish the wall, the curtain, the gate that separated humankind from the spiritual Church, the Holy of Holies, and the Garden of Eden.

When God created woman, He enacted the saving of Humankind. God wrote and exposed His entire Plan from the foundation of the world. The book of Revelations is the fulfillment of the book of Genesis. Christ is the Alpha and the Omega, Adam, the first man, the Savior, the Second Man. But He does NOT do it ALONE. Christ is the FOUNDER of the CHURCH; it’s CORNERSTONE. That’s why the first man was created FIRST and afterward, the woman. It has NOTHING to do with superiority and inferiority. It has to do with the order of things. “But every man in his own order: Christ the firstfruits; afterward they that are Christ’s at His coming” (1 Corinthians 15:23).

Christ died so the Temple curtain could be ripped open; that act signified the founding of the Church. It is through Christ’s blood and water that we have remission and cleansing of our sins and can enter the Church and at His Coming the Holy of Holies, the Garden of Eden, the Kingdom of God.

Remember, “the wages of sin is death; but the gift of God is eternal life through Jesus Christ our Lord” (Romans 6:23). That death is the surely die; the die die from eating of the Tree of the Knowledge of Good and Evil in Genesis 2:17. That is why the one-of-a-kind sleep/death of the first man/Second Man, Adam/Christ, and why God created woman immediately follow. God’s focal point is the Tree of Eternal Life. It’s only through Christ and His Church that this goal is attainable. That’s why the narrative of God created woman is lengthy,

The whole Plan of God was on stage when God created woman. This surprising narrative holds many more revelations about the Gospel, as we will see.

This blog post is an excerpt from chapter 2.3 of the book Origin of Woman.

Since you read all the way to here… you liked it. Please use the Social Network links just below to share this information from The Explanation, God Created Woman and Reveals Humankind’s Future