I will Build My Church = Yahweh Built the Woman 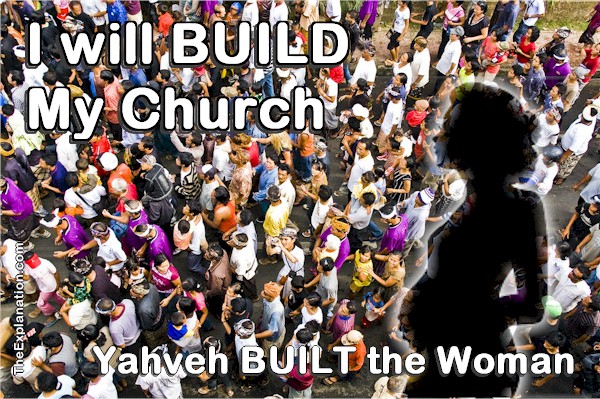 I will BUILD My Church parallels the Lord God made (the Biblical Hebrew is BUILT) a woman. Discover this amazing prediction and symbolism.

I will build My Church. The building (in Biblical Hebrew) of the woman in Genesis 2 foreshadowed this momentous pronouncement by Christ.

“I will build My Church,” are the Words of Jesus Christ. Four millennia earlier, Genesis 1:22 says the Lord God made a woman. The building (Biblical Hebrew word translated made) of the woman forecast the building of the Church. Only the woman can give birth to sons and daughters, who become the Sons and Daughters of God. Here’s the captivating story.
(Origin of Woman, chapter 2.6)

Last week we discussed the meaning of the Biblical Hebrew word for made in Genesis 2.23, “Lord God made … a woman.” God built a woman. Build, banah in Biblical Hebrew has to do with building a family to obtain children as we see below in H1129.

We will discuss the figurative meaning of banah. God is a Builder. The first structure (if I may call it that) He built was a Woman. Within the Biblical Hebrew term, banah (build) is the expression ben which means son. Through the woman, God built sons (all of humanity, sons, and daughters). But, it goes much further than just physical sons. God’s goal is to build spiritual sons, His divine sons. There’s only one place where His children can be built. It is in His Church. I will build my Church.

God built the woman. God built and continues to build His Church. The woman, figuratively, represents this Church. Ephesians 5:31-32 “…a man leave his father and mother, and shall be joined to his wife, and they two shall be one flesh. 32 This is a great mystery: but I speak concerning Christ and the church. Thie entire story of this Church is somewhat enigmatic, Paul (author of Ephesians) classifies it as a mystery. There are plenty of questions that still need answers. In essence, It is a group of worshippers of God. This assembly or congregation is associated with and are direct descendants of the wife, the woman.

The woman that Yahveh built in Genesis 2 prefigures what Christ said in Matthew 16:18, “I will build my Church.” Jesus ended that affirmative statement with, “and the gates of hell shall not prevail against it.” In other words, if there’s something sure, it’s the existence of His Church.

One of the themes and constants of the Old Testament is the building and presence of the Tabernacle followed by the Temple. Immediately at the Exodus, right after giving the Ten Commandments and the Law, God gives instructions for BUILDING the Tabernacle. Exodus 25-31, seven full chapters are devoted to this subject. Unfortunately, most readers focus on the physical building and surrounding objects. In reality, its primary use was a place of gathering in the presence of God, “… that I (the Lord) may dwell among them” (Ex. 25:8).

Further, in the same context, God adds, “And there (at the Tabernacle) I will meet with the children of Israel, and the tabernacle shall be sanctified by my glory. And I will sanctify the tabernacle of the congregation, and the altar: I will sanctify also both Aaron and his sons, to minister to me in the priest’s office. And I will dwell among the children of Israel, and will be their God (Exodus 29:43-45).

These edifices represented the Old Testament Congregation, the place of assembly, where God dwelt with and instructed His people. He had His servants, Moses, David and in particular, Solomon BUILD these assemblies and the places where they were to meet.

The affirmation, I will build My Church, is an ongoing endeavor even after Christ’s Second Coming. It would probably be better to say, especially after His Second Coming. Why? Because today, by God’s will and plan, the assembly is a small minority. But after His Return, it will be the vast majority of humanity. Look at Christ’s declaration.

14 Simeon [the Apostle Peter] has declared how God at the first did visit the Gentiles, to take out of them a people for his name.

15 And to this agree the words of the prophets; as it is written,

17 That the residue of men might seek after the Lord, and all the Gentiles, upon whom my name is called, says the Lord, who does all these things.

18 Known to God are all his works from the beginning of the world.

Building the woman is I will build my Church, representing building the human spiritual family. All of humanity becomes holy and meets God at His Holy Place, the Tabernacle, the Temple, the Church. After Christ’s Return, there will be the Temple, as a point of reference. Physical people need physical reminders of spiritual truths. This vast assembly is the spiritual fulfillment of what God told the male and female, “Be fruitful, multiply and replenish the earth…” (Genesis 1:28).

They were to grow the physical family, the sons, and daughters of God. After Christ’s Return, He and His Wife, the Church, The Woman will grow God’s Family, the Sons, and Daughters of God. That’s the reference to all the Gentiles, in verse 17 above. In general, we’ll have a converted world population living in harmony and meeting with Christ. What a contrast with today’s world.

Notices verse 18, known, from the beginning of the world Yes, known from Genesis 1 and 2. The Creation of the man and the woman prefigured the salvation and growth of God’s Family. The building process started with the woman in the Garden of Eden. And later on, the Tabernacle, and Temple, specifically the Holy of Holies representative of the God’s Assembly and New Jerusalem. The Explanation has taken the symbolism from Genesis to Revelations. The entire Plan of God symbolized by the building of the woman.

Here’s the New Testament verse and verb recorded for when Christ said I will build my Church.

G3618 οἰκοδομέω oikodomeō oy-kod-om-eh’-o; From the same as G3619; to be a house builder that is construct or (figuratively) confirm: – (be in) build (-er -ing up) edify embolden.

Matthew 16:18 is a controversial verse because of the relationship between the Greek words Peter (G4074) and Rock (G4073). Strong makes an important distinction. Peter is a piece of rock; Rock is a mass of rock. Since we now understand the relationship between the man and the woman, the husband and wife, Christ and the Church, the understanding of Rock, Petra, a mass of rock, should be clear. Christ is the Rock of this Union. He built the Woman. He builds the Church.

There’s another building analogy to drive the point home, using the same Greek word for build. Detractors regarded the building stone as worthless, unsuitable for construction, it became the very cornerstone of the edifice Christ is building.

To you therefore which believe he is precious: but unto them which be disobedient, the stone (G3037) which the builders G3618 disallowed, the same is made the head of the corner,

You also, as lively stones, are built up (G3618) a spiritual house, an holy priesthood, to offer up spiritual sacrifices, acceptable to God by Jesus Christ.

Christ is the Rock-solid Cornerstone and Foundation of the Church. Notice the building analogy continues referring to you, those who are true believers and part of the assembly as lively stones. They are the completion of the spiritual house. That is the spiritual accomplishment of building the woman in Genesis 2.22.

The spiritual implication of build.

The act of building is not just construction and then, abandonment. Building involves repair, maintenance, improvement, embellishment. It is an ongoing process. Both physically and spiritually. Spiritually that was the role of the Priests in Old Testament times with the rituals associated with their assembly. Later, that role fell to the Apostles and now to the ministry and the brethren and spiritual activity like charity as we see from the following verses.

Then had the churches rest throughout all Judaea and Galilee and Samaria, and were edified (G3618); and walking in the fear of the Lord, and in the comfort of the Holy Ghost, were multiplied.

… we know that we all have knowledge. Knowledge puffs up, but charity edifies (G3618).

Wherefore comfort yourselves together, and edify (G3618) one another, even as also you do.

Paul praised the Church for its edification, its continued building process. Notice in Acts 9:3 that the churches were multiplied. That vocabulary reminds us of what God told the male and female, “Be fruitful and multiply.” In all these ways, the building of the woman (the Church) is the piece of the salvation puzzle that, together with the work of the male (Christ), can bring about the multiplication of God’s sons and daughters.

This blog post is an excerpt from chapter 2.6 of the book Origin of Woman.

You can go over to UnlockBibleMeaning.com and visit Matthew 16:18, “I will build my Church.” By checking the verses with build (G3618), you’ll find a couple of interesting points. Firstly the negative side when the Pharisees built and garnished tombs (Mat. 23:29). Then the positive side, Luke 7:55 For he [a centurion] loves our nation, and he has built (G3618) us a synagogue (G4864). There are other lessons from studying the word build.

It’s also interesting to look at the meaning of Synagogue. It closely resembles that to do with the Tabernacle — a place of assembly. Please realize I’m talking about the meaning of the word. I’m not suggesting the place to assemble is in a Synagogue.

G4864
συναγωγή sunagōgē soon-ag-o-gay’; From (the reduplicated form of) G4863; an assemblage of persons; specifically a Jewish synagogue (the meeting or the place); by analogy a Christian church: – assembly congregation synagogue.

G4863
συνάγω sunagō soon-ag’-o; From G4862 and G71; to lead together that is collect or convene; specifically to entertain (hospitably):
KJV – + accompany assemble (selves together) bestow come together gather (selves together up together) lead into resort take in.

Since you read all the way to here… you liked it. Please use the Social Network links just below to share this information from The Explanation, I will Build My Church = Yahweh Built the Woman