Marriage Relationship. Man & Woman. In Front, Beside, or Behind? 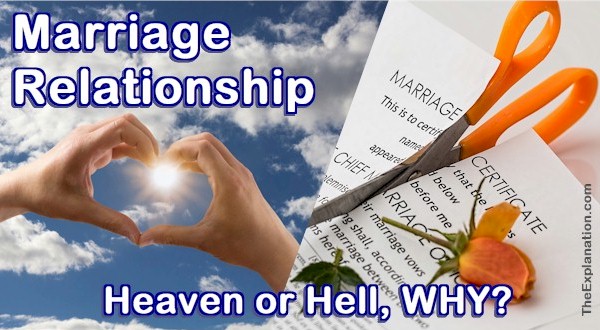 Marriage relationship. The most challenging relationship between two people. It can be heaven or hell. Here’s why.

Marriage relationship. Two people together, it can be heaven or hell. Here’s why.

Traditionally, the marriage relationship is two people of the opposite sex living together for life. Biblically, this is the case. Marriage is the ultimate, the epitome of relationships. Humans are relational beings, and society stands or falls based on relationships.
(Origin of Woman, chapter 3.2)

The Explanation is expounding the eight verses in Genesis 2:18-25 regarding the creation of woman. I’ve recounted how God took the side of the man and built the woman. How the man declared she is bone of my bones and flesh of my flesh. I could add, And then there were TWO. In an instant, the world population doubled! There were a man and a woman. There were TWO, and they had to live together for probably 50 years or more (no precision in the Bible) before they gave birth to Cain, their first child.

A marriage relationship is a man and his female helpmeet. The word helpmeet is a bit strange for us today, so let’s break it down. We have already looked at help, which is azer (H5828), and is translated by the King James translators with the variants: help, and for the root (H5826), succour with the idea of surround and protect. I pointed out that if you want help, you want it from someone BETTER than you are, otherwise, what’s the point? At her creation, this help is the side taken from the man who describes her as, bone of my bones. She is his mutual support, being better than him in certain domains, that’s azer.

In Strong’s presentation of Genesis 2:18 and help meet, there is one Biblical Hebrew word missing, meet. Meet can change everything in a marriage relationship. For whatever reason, the online Strong’s concordance at UnlockBibleMeaning.com doesn’t display this reference. But it does in the Interlinear where we find H5048 based on the root H5046. In the online Interlinear, the word neged is translated suitable, which I think is quite appropriate.

נֶגֶד neged neh’-ghed; from H5046 (נָגַד); a front, i.e. part opposite; specifically a counterpart, or mate; usually (adverbial, especially with preposition) over against or before:

נָגַד nâgad naw-gad’; a primitive root; properly, to front, i.e. stand boldly out opposite; by implication (causatively), to manifest; figuratively, to announce (always by word of mouth to one present); specifically, to expose, predict, explain, praise:

Please take a little time to read the translations of H5048 carefully. This Biblical Hebrew word jerks you into the second key of mastering Biblical Hebrew; the SAME word can have different, even opposite, meanings. Neged is translated, about (with the idea of round about) over against, presence. This female help is present, round about. Strong’s definition clarifies with counterpart, opposite, over against, and before. The Biblical Hebrew word neged reflects all these differences and oppositions of meaning. Impossible to know in English, hence the lack of understanding.

I entitled this post, Man & Woman. In Front, Beside, or Behind? The idea being to try to make it clear WHERE the position of the woman can be regarding the man and the man in relation to the woman. One word, neged, projects all these positions.

When you have two people in movement, there’s always a relative position between them. One is either in FRONT of, BESIDE or BEHIND the other. Three-dimensionally, they could also be OVER, BESIDE, or UNDER one another. The Biblical Hebrew word allows for ALL these scenarios. And therein lies the answer to both the tranquility and the turmoil we find in the marriage relationship. As well as any relationship between two or more people: in business, child-parent, student-teacher, gangs, workplace, or other relational situations.

Where are the players (the husband and wife), one in relation to the other? Are they in front, beside or behind? Each should be OCCUPYING the CORRECT POSITION at the RIGHT MOMENT. Then there is harmony and proper support. If not, there’s chaos and confusion.

The passing skills and soccer moves of the Barcelona football team beautifully illustrate this positioning in the video below. Even if you’re not a soccer player, watch the first minute or two with the exchanges between the two players as they pass the ball between themselves. Notice that one is BEHIND, BESIDE, and then IN FRONT of the other. What’s important is the coordination so that EACH can SUPPORT the other.

God created woman to be a help, a support, beside her husband. Sometimes, she has to be OUT FRONT to motivate, encourage, show, and give him what he does NOT have (understanding about relationships or emotional empathy, etc.). Sometimes she has to be BEHIND him and receive instruction (to bear her up when under duress, or face a difficult decision, etc.). Sometimes she has to be BESIDE him with a frank exchange. This NEGED is her FEMININE EMINENT role towards her husband. Likewise, this NEGED is his MASCULINE EMINENT role towards his wife.

It’s like juggling with the husband and wife, each carrying the ball and knowing how to pass it and receive it. Correct positioning, balance, and equilibrium are vital. Each has a specific role; each must play THEIR role and NOT the part of the other.

It is not my intention to get into the details of what a woman’s forte is and what a man’s forte is. We have already seen that God set two significant goals for humankind. Rulership and relationships. The GENERAL sharing of these roles puts the men more on the RULERSHIP side and the women more on the RELATIONSHIP side. It’s equality with different purposes.

All the above is theory. But if we translate it into practical reality, we can express it this way. A family has a preeminent leader, the husband with an eminent relational helper, his wife. He cannot rule without the relational help, and she cannot be relational without proper rulership.

Mutual LOVE between a man and a woman is striving for that balance. When two players are in perpetual movement, it’s hard to strike that balance. When both are pulling together, there’s a likelihood that the balance can be struck. That is a beautiful marriage union. When one or the other of the twosome is playing solo, or not at all, then everything is out of sync. That is a disastrous marriage relationship.

Below are the different balls EACH partner, the husband, AND the wife constantly juggle in their ruling and relational marriage union. I’ve highlighted them in italics, that’s a lot of balls to keep up in the air!

4 Charity (Sam, this is love) suffers long, and is kind; charity envies not; charity vaunts not itself, is not puffed up,

5 Does not behave itself unseemly, seeks not her (Sam, read its) own, is not easily provoked, thinks no evil;

6 Rejoices not in iniquity, but rejoices in the truth;

Humans, men, and women, whoever we are, will never have all the balls up in the air, perfectly juggling them at all times. BUT, if we tried a little harder, teaching ourselves and our children from the youngest age, that’s the responsibility of parents. How to juggle the balls of not easily provoked, bearing all things, the right approach to iniquity and truth, etc., then, and only then would we have better rulership and relations between members of the complementary sexes. Remember, they’re NOT opposite; we need the attributes of EACH gender.

It’s only when the male and female play their respective roles and NEGED mirrors side-by-side OR CORRECTLY in-front OR behind each other, that harmony can be instituted.

Don’t misread what I’m saying here. Some women have better masculine skills than men (plumbers, pilots). Some men have better feminine skills than women. (nurses, teachers). That’s part of life and to be expected. We need to accept these special amazing people for what they are. We’ll never have, nor should we strive to have a 50/50 break in plumbers and nurses. The genders are equal but different; this is what NEGED shows us. We have to occupy the right position based on each’s talents and skills. We all have to make an effort to fit ourselves into the WHOLE GAME. And each of us must allow others to fit themselves into the WHOLE GAME.

A marriage relationship as with inter-gender relationships can be heaven of hell. It depends on the whereabouts of NEGED. Daily we hear and read about heavenly and hellish relationships. Here is a smattering of both positive (correct neged placement) and negative (INcorrect neged placement) articles. Men, women, husbands, wives, sex, harassment, #metoo, clergy, and public immodesty have all become subjects of controversy as to what is allowed and what is not allowed. Genders are not positioning themselves correctly one to the other.

Women have a tremendous role in the professional world, as we saw in Proverbs 31. Women have a predominant role in sexuality, as we saw in the Song of Solomon. But, both these roles have to be played BESIDE (neged) their partner and the male gender in general, likewise with men assuming their positions of leadership.

Women make a difference. They are bridges connecting the members of their family together. They cement relationships and make organizations work. They have incredible empathy and communication skills with the ability to use language adroitly and compassionately. The female gender is overflowing with feelings, imagination, intuition, rhythm, holistic thinking; they have dreams, take initiatives, and reach success.

At the foundation of each home is a woman. Their essential role in society is indisputable. Men and women, husbands and wives, parents, and children live together. It can be side-by-side (neged) or face-to-face (neged). God created a female help meet for the lonely male; the meet (neged) can be suitable or unsuitable, appropriate or inappropriate, heaven or hell. The Biblical Hebrew allows for both. God has given free will to males and females for them to be side-by-side or face-to-face.

Living a lifelong twosome relationship, with men and women responsibly taking their respective positions, one with the other is what the Bible recommends, as we shall see next week. Positive neged is bringing the two together to form one.

This blog post is an excerpt from chapter 3.2 of the book Origin of Woman.

Since you read all the way to here… you liked it. Please use the Social Network links just below to share this information from The Explanation, Marriage Relationship. Man & Woman. In Front, Beside, or Behind?