God Made a Woman. The Feminine Moment. Discover the Meaning 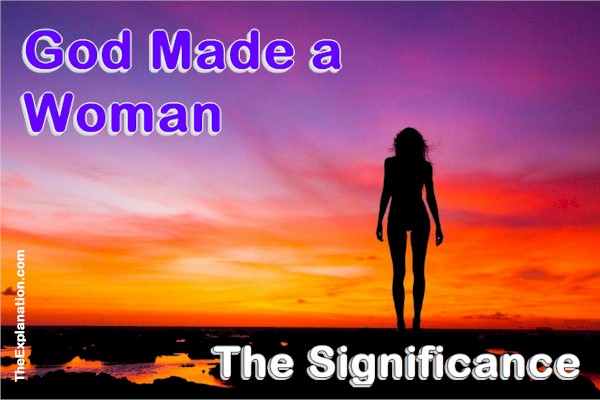 God made a woman. This phrase encloses the entire reason for being of women; all women, worldwide. Finally, we can understand their destiny.

God made a woman. The Biblical Hebrew reveals her significance and incredible destiny.

God made a woman. Learn the depth of understanding in this statement; in the one Biblical Hebrew word made. A must-read for every woman who wants to discover the real reason for their existence. And men, especially, need to grasp the calling of half the world population.
(Origin of Woman, chapter 2.5)

The English translation made, is incomprehensible, and hides the depth of comprehension that The Explanation will make crystal clear. Here’s the Bible context.

And the rib, which the LORD God had taken from man, made (H1129) he a woman, and brought her to the man.

The Biblical Hebrew word for made (H1129) is banah. This verb is used for the FIRST time in the context when God made a woman; this is significant when it comes to creation which is the general subject of Genesis 1-2. Let’s quickly look at verbs used for preceding creation events.

Four different verbs refer to events of Creation, three of which we’ve seen and elaborated.

God built an ezer (help) for the man. We saw that this ezer has Godly characteristics of the highest nature. Let’s be more specific and see what these BUILT-in characteristics are. Here’s the first definition of banah.

Banah contains all the basic and essential ingredients that characterize the ezer when God made a woman. Banah is translated over 350 times with the word build and only three times with the word made. Biblical Hebrew is not a question of statistics but of meaning. Banah means to build; the other translations are derivatives related to ways to build like set up and repair. A figurative counterpart is building a family by obtaining children.

And Cain knew his wife; and she conceived, and bare Enoch: and he builded (H1129) a city, and called the name of the city, after the name of his son, Enoch.

And Sarai said to Abram, Behold now, the LORD has restrained me from bearing: I pray you, go in to my maid; it may be that I may obtain children (H1129) by her. And Abram hearkened to the voice of Sarai.

And he repaired (H1129) the altar of the LORD, and sacrificed thereon peace offerings and thank offerings, and commanded Judah to serve the LORD God of Israel.

And the passengers that pass through the land, when any seeth a man’s bone, then shall he set up (H1129) a sign by it, till the buriers have buried it in the valley of Hamongog

Banah (H1129) is a Biblical Hebrew root, the sixth key to master Biblical Hebrew. Roots are the most basic form of a word. We should say, the most fundamental form of a concept. Why? Because with the usage and meaning of banah we’ve already seen that there’s a universe of difference between the English, make, and the Hebrew build (this is a common modern Hebrew word). There are derivatives of the root that bear additional meaning. Look at this one, which is very well-known.

בֵּן bên bane; from H1129 (בָּנָה); a son (as a builder of the family name), in the widest sense (of literal and figurative relationship, including grandson, subject, nation, quality or condition, etc., (like father or brother), etc.):

Ben, a common name, known to all. In many languages ben-… or bin-… means son of. What people don’t realize is that this harks back to the very creation when God made a woman and inaugurated her role, her piece in the coherent, complete puzzle. When Yahweh BUILT the woman, He was building future sons through her.

One of the main titles to designate ALL humans in the Bible is the sons of God. Whether they are for-or-against God, a human being is a son of God. It is thanks to the woman that the world population can be fruitful and multiply with sons and daughters. The way God made and built the woman incorporates one of the meanings and purposes for her creation.

Maybe you’re thinking, Sam Kneller has twisted scripture. It says God made, (built). You can’t apply what God built to the woman; the built refers to God’s qualities, not the woman. That’s a legitimate query. Let’s answer it. To do so, we have to refer back to Genesis 1:27, “So God created man (this is a generic term referring to ALL humans, NOT the male gender) in his own image, in the image of God created he him; male and female created he them.” God embodies BOTH genders. God has the perfect male and female characteristics.

When He formed (yatsar) the male gender, He endowed them with His MALE qualities. When He built (banah) the female gender he gave them with His FEMALE qualities. The verbs yatsar and banah embody these qualities. Both males and females are in the IMAGE of God in that they EACH carry the specificities of EACH of God’s characteristics. Without going further here (I will later), That’s why COMBINED (not ALONE, it is NOT good that the man be alone.) they better represent the WHOLE IMAGE of God.

I don’t have space here but, go over to UnlockBibleMeaning.com and do a study on some of the translations of H1121, ben/bane. Look at: branch, firstborn, lamb, worthy. If you even have a cursory knowledge of scripture, just those four words make your mind jump to WHO it’s referring to, Christ.  Remember the seventh rule to master Biblical Hebrew; each word tells a STORY. Banah tells the story of the entire Plan of God which centers on His Son who is the Branch, the Firstborn, the Lamb, “Worthy is the Lamb that was slain to receive power, and riches, and wisdom, and strength, and honour, and glory, and blessing” (Revelations 5:12).

When God made a woman, when God banah a woman, for the first time, He uses a verb that incarnates His entire Plan of Salvation. It is only through this Building of a Woman that all humankind can attain salvation.

Here is another in-depth look at the meaning and relevance of build, banah. It is in the form of a related word. Strong’s does NOT show any relationship between these words. I do not consider that a problem, simply because Strong did incredible research in looking at the ORIGIN of words, but not necessarily, the relationship of words BEYOND their ROOTS.

Biblical Hebrew words with the SAME ROOT letters might not be related grammatically, but they can and do RELATE in meaning and significance. I’ve already discussed this point, read the significance of shevet. Banah is another of those words. We have seen the root in H1129 and a related word in H1121. The word H995, below, has identical consonants as H1129.

These consonants are ב (beth) and נ (nun), this changes to a final nun (ן) when it’s the last letter of a word, hence נ = ן). All the other letters, the hay (ה), and the yod (י) are vowels and interchangeable and not part of the root. Let’s see another word with the same consonants that Strong does not associate with banah, erroneously, in my opinion.

You immediately see the root letters (ב and ן). Do all those KJV translations reflect God? Yes, yes, yes. By this word’s root construction, it is related to banah. God built the woman with ALL these attributes. An incredible woman you’d want to have as an ezer. A help every man should want by his side.

Strong adds to separate mentally. In brackets, he adds distinguish. I’ll explain why he pinpoints these words. Leading from this idea, a woman has a SEPARATE MENTALITY compared to a man; A DISTINGUISHABLE, different mindset, and outlook than man. There’s no question about superiority or inferiority involved here. We’ve already discussed the equality of the male and female in that both possess the image of God. We shall be taking a closer look at some of the KJV translations for בִּין bîyn. But, diligence, eloquent, intelligence, thinking, understanding, wisdom are all highly positives qualities for any person. These qualities characterize the woman Yahveh created.

Man is preeminent but woman is distinguishable. Equal, but different, both genders have outstanding and complementary roles.

That’s why the creation, when God made a woman receives so much attention and leads to the climactic conclusion of the creation narrative in Genesis 2.25. That verse is particularly difficult to understand, and The Explanation will explain it in due course. Without Woman, we are ALL lost, With Woman, there’s hope and a future. Men, it is not good to be alone, we owe everything to women.

We are not finished with banah. Next week we’ll see another dimension of the scope of this word, this exciting piece of the puzzle.

This blog post is an excerpt from chapter 2.5 of the book Origin of Woman.

Since you read all the way to here… you liked it. Please use the Social Network links just below to share this information from The Explanation, God Made a Woman. The Feminine Moment. Discover the Meaning