From Dust You Came. The Biblical Hebrew Meaning 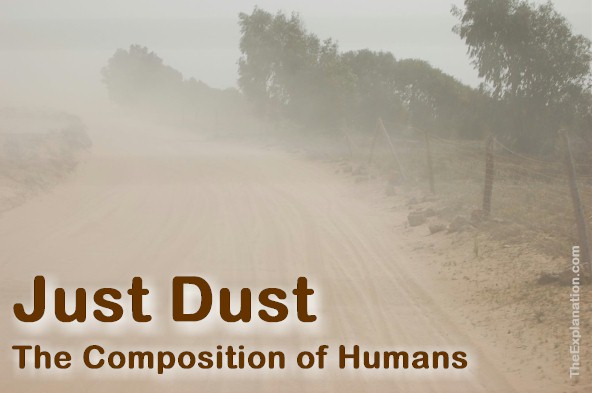 From dust, that’s the composition of our bodies. In fact, the Biblical Hebrew description is even more direct. See what it says.

Dust. God made man from dust out of the ground. Not very haughty stuff. One Biblical Hebrew translation is even more explicit.

You are from dust and to dust shall you return. Quite a well known Bible verse from Genesis 3:19. What does it really mean? If you asked someone what the Bible says man is composed of, I think the general answer you’d get is: of the ground. That’s not far off, but it’s not exactly right.
(Origin of Humankind, chapter 3.2)

Immediately after evoking the mist that watered the ground with the luscious flowering greenery, the narrative switches abruptly to Yahveh, forming man out of the most sterile part of that same ground. Why this contrast?

And the LORD God formed man of the dust (H6083) of the ground, and breathed into his nostrils the breath of life; and man became a living soul.

Why did Yahveh choose dust and not the ground? Because coming from dust teaches us several characteristics. Not just of man, but all humans. Let’s first see the Biblical Hebrew and how the King James translators rendered it.

עָפַר ʻâphar aw-far’; a primitive root; meaning either to be gray or perhaps rather to pulverize; used only as denominative from H6083 (עָפָר), to be dust:

There is a vivid contrast that God wants humans to understand. Our origin is in stark contrast to

We’ll get to a much deeper explanation of water and life as well as the breath of life and living souls in upcoming posts, but dust, as such, is dead. We discussed abiogenesis on Day 3 of Creation when God created dry land. Without water and air and the bacteria in the air, there’s NO life. In dust, there’s NO life. On Day 6, God said, Let the earth (not the dust!) bring forth the living creature. Of course, God created the animals but, even the fauna comes from living matter, whereas man doesn’t get that distinction. Man, representing all humans, is made from the dead dust of the ground. Humankind begins rather austerely even compared to animals.

Did you notice the last word after the KJV in the list of translations for H6080, the root of dust, rubbish? Pretty graphic. Nehemiah 4:10 says, The strength of the bearers of burdens is decayed, and there is much rubbish; H6083 so that we are not able to build the wall. That’s what we humans are, what we humans do. Here’s another piece of the puzzle you can assemble in this context, Isaiah 64.6,  But we are all as an unclean thing, and all our righteousnesses are as filthy rags; and we all do fade as a leaf; and our iniquities, like the wind, have taken us away.

Please understand, this is not intended to be negative, but we have to call a spade a spade. Man, humans start our from a very low position, in some ways lower than animals because, as I said, they were brought forth by the ground. Dust is synonymous with rubbish, unclean things, and filthy rags.

Man’s and human’s story starts from the most humble origins but includes potential far beyond animals. We’ll get to that in the rest of this verse. Yahveh, man’s Creator could’ve used ground or wood or grass to form man, but He used dust. The Explanation has just given you a reason for this choice, but there are other reasons.

Last week we saw that God formed man. Go to UnlockBibleMeaning.com and look up Gen. 2:7. Switch to Strong’s and click on H3335 the reference for formed. Then click on Hebrew Concordance at the bottom of H3335. Read the verses that use H3335, and you’ll see ONLY God and humans can yatsar – form things. Why? Because man is made in the image of God. God forms, likewise, man forms. Please allow this concept to sink in because it’s new to most readers.

In the list of verses with H3335, read Isaiah 44:9-10 and see what man forms: idols from molten metal and other materials including clay like a potter. They [humans] that make (H3335) a graven image are all of them vanity (Sam, this corresponds to the dust, rubbish, filthy rags); and their delectable things shall not profit; and they are their own witnesses; they see not, nor know; that they may be ashamed. Who has formed (H3335) a god, or molten a graven image that is profitable for nothing? God formed humankind from dust; humankind forms valueless graven images from dust.

Let’s see just how useless those graven images are and how God drives home that lesson. Read Deuteronomy 9:21 And I [Moses] took your sin, the calf which you had made, and burnt it with fire, and stamped it, and ground it very small, even until it was as small as dust (H6083, the same dust God formed man from): and I cast the dust thereof into the brook that descended out of the mount. Exodus 32:20 adds another foolish detail about this same episode.

And he [Moses] took the calf which they [Israelites] had made, and burnt it in the fire, and ground it to powder, and strawed [spread it out] it upon the water, and made the children of Israel drink of it. God had the Israelites drink their god! What a lesson.

There’s the full circle of rubbish: Rubbish (humans) form rubbish (graven images), which God grinds back to rubbish (dust), then He has rubbish (humans) consume rubbish (the idols reduced to dust). That’s one of the stories of the Biblical Hebrew words form (H3335) and dust (H6083). Sounds foolish, but it’s ironic wisdom.

Transpose this into a 21st-century narrative. Humankind is fabricating a lot of garbage gadgets (our modern idols). You fill in the rest of the story as to where this is headed. You know enough about what the Bible says regarding the present and the future to know we’re pottering the clay of planet Earth at a consumer rate such that the world population is far outstripping the available rare clay to make our modern toys. This deficit cannot go on indefinitely. That’s what God’s Word says.

Dust you are and to dust shall you return.

I’m going to leave you with this quote above from Genesis 3:19. Why would God create humans from dust only to let them ignominiously end their lives in the same state? What’s the point of life if this is the case? As you know, this is the situation that philosophy and non-believers have to handle. What’s the motivation for life? From the Bible, we know there is a purpose for life. So, why then, would God have us end up as we started? Dust. See Further Study

A hint as to why we end up as dust is in the very next concept in Genesis 2:7, the verse we’re studying. Look it up at UnlockBibleMeaning.com and check both Strong’s definition and the KJV translations for breathed as in God breathed into his nostrils; this is very instructive, and few comprehend how the same Biblical Hebrew word can have such contrasting meanings. I’ll tell you that story next week.

This blog post is an excerpt from chapter 3.2 of the book Origin of Humankind

Since you read all the way to here… you liked it. Please use the Social Network links just below to share this information from The Explanation, From Dust You Came. The Biblical Hebrew Meaning