Mankind sits at the Pinnacle of the Amazing Life Chain. Why? 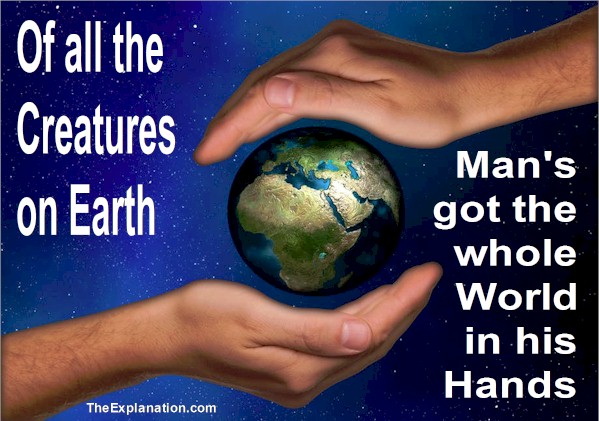 Mankind sits at the pinnacle of the life chain with his imaginative mind and his fragility. What a paradox. Yet he rules over his small part of the cosmos. Why? Mankind sits at the pinnacle of the life chain with his imaginative mind and his fragility. What a paradox, yet he rules over his small part of the cosmos. Why?

In this first tome of The Explanation, we’ve quickly surveyed our entire universe, including mankind. With Galacti’s help, we’ve visited and experienced scenes that are normally inaccessible.
(chapter 10.1)

We’ve traveled from fundamental particles to the formation of the elements that make up the vast universe, descending through our atmosphere to survey water and earth, the support systems of life itself. We’ve examined the role of plants as intermediaries between the inert mineral world and the organic world of animals and mankind, and we’ve ended with an analysis of man’s brain and mind.

It is necessary in our Inventory of the Universe to come down to man who, with his present knowledge, sits at the pinnacle of this incredulously complex and at the same time beautifully simple cosmos, at least as far as mankind can ascertain of himself.

#Mankind sits at the pinnacle of this incredulously complex and at the same time beautifully simple #cosmos. Click To Tweet

Science and its incredible array of tools, from the Large Hadron Collider that confirmed the existence of the elusive boson particle to Voyager 1, the first vehicle after thirty-five years to travel into interstellar space, have put our universe on display, from the minute to the immense.

Each day we learn more about its wondrousness and how it works, and we are literally humbled by its magnitude. Written material, photos, and videos abound to expand on the marvels of which we’ve just scratched the surface.

However, in this opening volume I’ve given you an overall view of its splendiferous entirety. We cannot put the puzzle together if we don’t have all the pieces. They are now before us, turned right side up. We see them in sequential order as they’ve developed over 13.8 billion years.

During our amazing journey, we’ve discovered a number of conundrums summed up by that unanswerable question: which came first, the chicken or the egg? Did amino acids come first, or did the proteins that contain and produce amino acids?

Let’s ask another: “We know that the expansion of our universe is accelerating, not decelerating. What implausible force is behind such a venture?” And another: “Since our universe is composed of space and time, and since it’s expanding, what is it expanding into?

The expansion of our #universe is accelerating, not decelerating, what is it expanding into? What's out there? Click To Tweet

What’s out there beyond the extremities of our universe that is becoming a part of it at a rate of billions and billions of square kilometers per second?”

Galacti has put on his kiddie cap and is asking his “why” questions: “Why does this universe exist? Why is mankind on Earth? Is there a point to life?” These are what we’d call philosophical questions. Some say “Who cares? Does it really matter?” but others either offer ideas or are looking for answers to such questions, whether the answers are scientific, philosophical, or spiritual.

And the ultimate satisfaction would be to have the answers satisfy the scientific, philosophical, and religious minds. Is this possible? That’s the challenge The Explanation has set for itself.

In the universe, on Earth, only mankind can set such a challenge for himself—puny man: so insignificant, yet so remarkably noteworthy.

Yes, man is at the pinnacle of the life chain, and at the same time he is fragile and lacking in so many areas. This is the paradox of man. The amazing saga of how man got to be where he is.

Mankind is at the pinnacle of the life chain, and at the same time is lacking in so many areas. This is the #paradox of man. Click To Tweet

The incredible thing about the story of mankind compared to animals is that he comes up short in practically every single department, and yet he still ends up coming out ahead! Imagine the unimaginable.

This post is an excerpt from chapter 10.1 of Inventory of the Universe.

This video is a TED Talk by Yuval Noah Harari author of a book entitled Sapiens – A Brief history of humankind. His book almost made my Top 10 list of Books to Take Inventory of the Universe

If you read chapter 9 of Inventory of the Universe you’ll see that the imagination is associated with mankind’s mind. Where the mind comes from and why mankind alone and not chimpanzees have minds will be broached in book 3, Origin of the Universe. Stay tuned.

Since you read all the way to here… you liked it. Please use the Social Network links just below to share this information from The Explanation, Mankind sits at the Pinnacle of the Amazing Life Chain. Why?