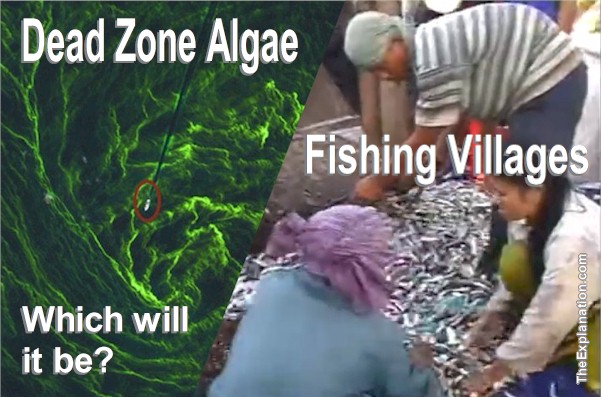 Water, the natural habitat of fish, nourishes one billion people on our planet. We might tend to shy away from this slithery nourishment, but for many, it is life.

A ship (encircled) leaves a wake as it plows through Baltic Sea dead zone algae, A Khmer fishing village with an abundant catch of nourishing fish. What are we doing with our water?

Life in a Cambodian Fishing Village

We are floating on the Tonle Sap River in Cambodia, observing the traditional lake/river village floating houses built of bamboo and anchored by boats, also made of bamboo. As well as a boat market where the residents set up the houses for selling, as well as a floating gym, battery shops, and medical clinic. We watch the daily life of the Cambodian or Khmer lake-dwellers, who have been building their floating homes, living on the lake, fishing, and growing rice for food. The Khmer fishermen harvest fish from the lake’s 150 species of fish in the same manner their ancestors did a thousand years ago.
(Audit of the Universe chapter 3.5)

They use the traditional large bamboo baskets to fish, as well as smaller baskets to harvest tiny shrimp. The fishermen submerge their fish and shrimp traps overnight, anchoring the shrimp baskets to trees. As the water fills the bamboo basket traps, so, too, do fish fill the baskets. When the fishermen draw the basket traps from the river the next morning, the small and large baskets are brim-full with shrimp and fish, respectively, packed together.

Traditionally Khmer people, Cambodian people, are farmers and fishermen and rice-growers; the urban planning in the ancient city of Angkor, which once supported 1 million people, was based on water technology; unfortunately, ‘poor stewardship’ used up that water and the Khmer abandoned it. The farmers follow the seasons and the regime of water. Still, Galacti observes that they also obey government regulations and avoid catching shrimp from June to September, the shrimp-breeding season.

The fishermen obey Order 001 and do not fish from July to October. Otherwise, the government burns the fish traps, fishing tools, and shrimp baskets! Family fish farms (aquaculture), for raising fish and tiny shrimp, assist in the food supply. Indeed, the lake has been historically responsible for feeding an empire.

The lake made the building of Angkor Wat and all other magnificent Khmer temples possible, since the rice paddies, watered by the lake and fed by the reservoirs, could feed the 300,000 people who built Angkor Wat in 30 years. Also, the lake is a source of food. We see a history review of the ancient Khmer people in 800 AD, settling in this area rich with water resources coupled with the supply of building material in the mountains and forests (stone for the temples, wood for houses) and additional food sources, such as wild game, in the forest.

We notice from watching the historical review that the ancient Khmer exist in harmony with the water just as their modern counterparts do. Their modern counterparts have cell phones made by a company in Vietnam, and the houseboats have battery-powered televisions. Still, the modern Khmer and the ancient Khmer both let their bamboo houses move with the tide rather than radically changing their environment to suit them.

It is thought provoking to see a culture live peacefully with nature on the lake, in a country with a complicated recent past. Even though there has been deforestation affecting the Tonle Sap River and Lake in Cambodia, the fishing solution seems to work well as opposed to dead zones worldwide.

As we look at the photos we have taken of the Tonle Sap fishing village; our boat takes us into one of the 500 dead zones of oceans and seas on the planet. Most of which we find along the eastern coast of the United States, and the coastlines of the Baltic States, Japan, and the Korean Peninsula. The Baltic Sea, in particular, is thought to be the world’s largest ‘death zone’.

The Baltic Sea, which borders Poland, Germany, Russia, Finland, Denmark, Sweden, Estonia, Latvia, and Lithuania, is called “the world’s most polluted sea.”  It is not just the 60,000 tons of World War II-era mustard gas and arsenic, lying dormant in a military wreck that might be released and contaminate the water. It’s that contaminated bilgewater, oil spills, wastewater treatment runoff, and industrial waste that have been a problem in the Baltic since 2002. And now, the dead zone is as large as the entire border state of Latvia.

Simply put, a dead zone is a section of water in which pollution causes mass algae blooms; in turn, the algae remove all the oxygen supply needed by the fish and other marine life—the result is fish dying off. Dead cod and whiting rot in the open air while trawlers and fishing boats continue to catch them. Plants such as eelgrass, necessary to cleanse nitrogen from the water of the Baltic Sea, have died because of the elimination of their oxygen by a concentration of hazardous substances. They are twenty times greater than, for example, in the North Atlantic dead zones on the Eastern US/Canada and Western European Atlantic coasts—the concentration is denser in the Baltic.

Algal blooms threaten human life too when washed up on Baltic Sea coastlines and beaches such as Sopot in Poland and the shores of Gotland in Sweden. Swimmers in these waters and young children playing on the algae dumps on the beach experience severe health problems: skin irritation, eye irritation, allergic reactions, gastrointestinal upset, serious illness, and death.

What to do to correct the damage? Well, it is difficult; unlike most lakes and seas, the Baltic Sea has too much volume of water to be oxygenated or dredged for trash and chemicals, as land-locked lakes are. The Baltic Sea problem is so pervasive that Russia, Finland, and ten other Baltic and European nations, including Poland, which has its own ideas, have met to promote biodiversity. They want to reduce pollution from ships, and in keeping with this, eliminate the 49,000 square kilometers morass of algae that originally choked the waters of the Baltic in 2010.

The Baltic States reported that the algae blooms are due in part to annual emissions of 36,000 British metric tonnes of phosphorus and 737,000 tonnes of nitrogen. To achieve this goal, the Baltic and other European states need to reduce those emissions by 15,000 tonnes of phosphorus and 135,000 tonnes of nitrogen annually. According to the latest report, because of measures such as improving wastewater treatment plants and sludge treatment in Riga and Jurmala, Latvia, Gdansk, Poland, Brest, Belarus, and Turku, Finland concrete commitments are underway for change.

Finland is using the mineral gypsum in the fields to reduce the leaching of dangerous chemicals. How does gypsum do this? Well, this mineral changes the structure of soils, especially acid sandy soils (which Finland has), and inhibits leaching of phosphorus, for example. That solution is less than successful in Poland: a large phosphor-gypsum waste pile in Gdansk, which is slowly leaking, could release more chemicals into the water than all the disposal sites located near Finland’s cities combined.

Shipwrecks as a Solution

Fishermen in these dead zones trawl for fish on the floor in the depths, wrecking the habitat and crushing, snaring, or leaving vulnerable the fish that escape the boats. In many cases, there are no more fish, or fishing is banned entirely. Species diversity decreases, although different species may make the wrecked habitat their new home. Annually, deep-bottom trawling worldwide destroys a seabed area twice the size on the continental United States—the very dry seabed on which we are standing.

Shipwrecks and sinking old hulks cause them to calcify into coral reefs. It is deliberate, and mariners, in some cases, wreck ships to encourage new coral reefs. The shipwrecks have two significant complementary effects: providing homes for all manner of fish, crustaceans and other sea life, and helping invasive species to grow.

A program in the USA, mainly in the Gulf of Mexico, called Rigs-for-reefs, considers that the offshore oil platforms are already artificial reefs, having been in place ten and up to 30 or 40 years. Marine life concentrates around them, and the project simply reduces their height or topples them over—a way to protect and promote the environment that nourishes so many people worldwide.

This blog post is an excerpt from chapter 3.5 of Audit of the Universe.

Since you read all the way to here… you liked it. Please use the Social Network links just below to share this information from The Explanation, Nourishing Water: Fish, Fishing Villages, Dead Zones and Shipwrecks