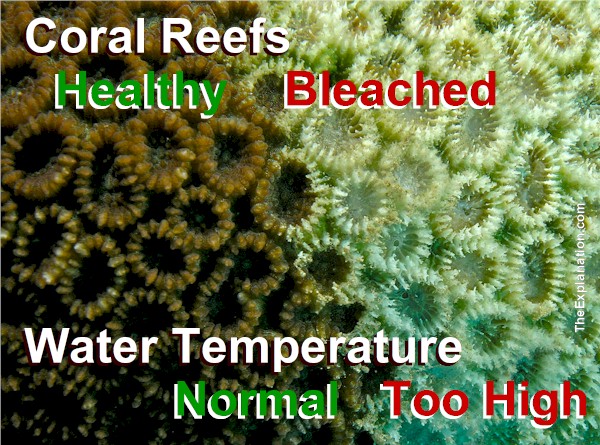 Water resources are critical to the existence of life, from coral reefs in the vast salty oceans to glaciers, rivers, and ponds for freshwater. Every drop plays its part.

The increase of carbon dioxide by 41 percent since 1990 in the atmosphere is causing its excessive dissolving and the formation of carbonic acid in the oceans. A study by Timothy Wootton of the University of Chicago revealed that this is happening ten times faster than simulations expected. The result is an increase in acidity by .036, or 23 times more than predicted, of the saltwater resources which can disrupt marine life.
(Audit of the Universe chapter 3.6)

The acidity or pH, which is 8.1 (Galacti shows us that the neutral pH level is 7), has already started to attack billions of carbonate of calcium shells of marine organisms in all oceans around the world. The acidity is causing osteoporosis in coral reef polyps, which, when alive, provide an essential part of the marine food chain (feeding on small animals) and shelter for clownfish, raccoon fish, blue tang, and eels, for example. When the coral polyps die, their skeletons build the Great Barrier Reef or the coral reefs of the Hawaiian Islands.

There is another reason to care about the coral reefs and pollution, if not just for ethics’ sake or as humanitarians: for health reasons. Many pharmaceuticals are being developed from the diversity and extraordinary resistance of reef-dwelling marine life.

Water resources are a key to life. From the salty oceans to freshwater. Every drop plays its part. Click To Tweet

Pepsico, Voss, and Shoes For Water

We learn that drinkable, clean water resources are a scarce commodity for some 780 million people worldwide, 2.5 times the population of the United States. They lack access to improved water resources, approximately one in nine people. Two-thirds of Africa lack access to drinkable water, and many Middle Eastern countries must import 90% of their drinking water.

Who is acting to reverse this trend? Will international organizations such as church groups, charities, and even corporations provide drinkable water to ‘water-stressed’ parts of the world such as sub-Saharan Africa, Haiti, South America, and so on?  Well, yes, companies such as TOMS Shoes and Voss Water, as well as charities such as Shoeman Water Projects, are all using commerce as the vehicle to fund water projects such as clean-water wells in Ethiopia and drinking water in a school in Haiti.

What are the concrete results, as we drink bottles of Voss water and wear pairs of TOMS glasses specifically sold to raise funds for water resources projects? These corporate-charity partnerships have funded more than 8,000 projects, helping bring clean and safe drinking water to more than 3.2 million people in twenty countries.

Ah, but for every corporate project intended to ease water stress, we have the reach of globalization using up more resources. That picture is changing, thanks to factories such as one owned by Pepsico in India. Pepsico reduced overall water consumption in its plants by 20 percent in 2015. Already Pepsico conserves more water resources than its actual plants consume via water resources regeneration programs and has saved 16 billion liters of water from 2006 to 2011, with an additional 45 percent reduction in water consumption in India from the 2005 base. But India is facing severe water contamination and shortage from agriculture and lack of monsoon precipitation.

However, corporations also buy up water resources from countries and sell water back to the people in bottled water form or manage the water as they please. In France, the companies Suez/Veolia had a bottled water monopoly and free access to Paris water until Paris voted to reclaim its water services. As a digression, bottled water serves a purpose, especially in so many countries in which you have to boil the water and sterilize it to drink it. However, again, let’s question why the waterways of Kuala Lumpur, Jakarta, Buenos Aires, or Acapulco are in such a poor state that we can’t even brush our teeth in a hotel bathroom.

So why do organizations such as the World Bank continue to fund private water companies such as Suez/Veolia and Thames/RWE, which appropriate water from communities worldwide and do not do the job of providing water services in the Philippines, for example?

Corporations and states do come to a mutual compromise that is benevolent, for example, in September 2017, Southwestern water and the U.S. government confirmed the U.S.-Mexican agreement for sharing the distressed Colorado River water. The U.S. will invest in the vicinity of $31.5 million to support Mexico’s water infrastructure and upgrade their farmland production. In exchange, Mexico agreed to reduce its portion of river allotment should the U.S. reduce its own water allotment in case of severe shortages, because of drought conditions.

The 1.9 billion cubic meters of water from Mexico’s share of the Colorado River, about 10% of the total flow of the 21 billion cubic meters, allotted to the U.S. and Mexico, supports the bathing, washing, and nourishing needs of 200,000 families for a year. Also, the compromise involves selling Colorado water back to Mexico at a later date. To Mexican farmers who want irrigation canals in Mexicali restored, the agreement seems worthwhile.

It brings us full circle back to the land and crops and water resources.

We have seen how Israel has smartened its water practices, but other countries have their own processes for recycling and reusing water. In the areas surrounding Mexico City, the wastewater is all that is available to the farmers, who use the tainted water to grow crops. We shake our heads as we realize we cannot eat particular fruit that comes from Mexico or markets in Taiwan or China.

In some areas, wastewater is all that is available to farmers, who use the tainted water to grow crops. Click To Tweet

In these countries, the term ‘organic’ does not take into consideration’ environmental contamination’ only no use of immediate and locally used products like fertilizers and pesticides. The earth and the water might be polluted, and produce can still be exported and marketed–which is the case. What’s in the water winds up in our food.

We take a drink from a clear crystal stream, and we view the ability to cleanse, bathe, have free access to water resources from our sink or a glass, sail the oceans, and harness hydroelectric power as a glass-half-full. We look at waste disposal, chemical dumping, and poor management as a glass-half-empty.

This blog post is an excerpt from chapter 3.6 of Audit of the Universe.

Since you read all the way to here… you liked it. Please use the Social Network links just below to share this information from The Explanation, Water Resources: Coral Reefs, Sodas, Colorado River and Crops