Globalization: Integration Versus Segregation of People 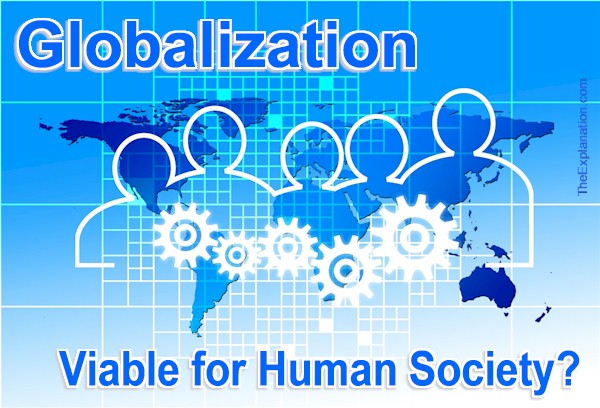 Globalization is a challenge. How do you integrate human beings when the natural tendency is to group by ethnic language and ethnic culture?

Globalization. Is it a viable option to structure human society and obtain satisfactory social relationships?

Globalization has its pros and cons. World travel and social integration is a wonderful idea. What is the norm for such a utopia? We in the democratic, liberalized West might think that should be the norm. Many don’t share our point of view. The fiber of human society and social relationships is in play with this world-encompassing issue.
(Audit of Humankind chapter 6.13)

This leads to marriage and husband and wife with its beneficial effects. The family is the cornerstone and parenting with its complementary roles being the ideal incubator for the next generation. This leads to larger groups of extended families, ethnic clans and nations with their cultures.

Globalization has its pros and cons. What is the norm for such a utopia? We in the democratic, liberalized West might think we are the norm. Many don't share our view. The fiber of human society is at stake. Click To Tweet

As the 21st century progresses, a new phenomenon has reared its head, globalization. The past three decades have seen bounds in technology. This has blossomed into global communications and global transport.

Skype allows people anywhere in the world to connect in seconds and talk for hours. Skype is at the origin of international cross-border marriages. Not even language is a barrier anymore. You can have a live real-time conversation with anyone, anywhere, each speaking their own language accompanied by instant translation. Even reading books and watching a video in foreign languages becomes possible with Google translation. Facebook and Twitter make news anywhere instantly accessible around the planet. Before we heard about news events on TV or radio. Now those media are tuned into social media to gets their scoops. Globalization of communication and international relationships is a reality.

Transport sees mega ships plowing the seas delivering thousands of containers to ports around the world in days. World-spanning airlines shuttled 4 billion passengers on short-haul and long-haul flights in 2017. At any given moment there are over 6000 planes in the air worldwide. The fleets of UPS and Fedex planes and trucks deliver 19 million packages a day. Just before Xmas, UPS will hit close to 30 million international and national packages delivered in ONE day! The figures are staggering. Globalization of international commerce is a reality.

The new airport in Ankara is a monster. Named Sultan Abdul Hamid known for his late 19th-century rule and massacres. It will manage 200 million travelers a year by 2028 when the biggest airport in the world until now, Atlanta, handles only 104 million. The Bosphorus Strait is on the direct route between Asia and Europe, much more so than the Emirate States that have developed mammoth world class airlines. Turkish Airlines is snapping up new planes from Airbus and Boeing by the hundreds to serve its 304 destinations using 6 runways designed to cater to the biggest planes. Globalization of passenger transport is a reality.

Today, problems exist and solutions are sought on an international level. International organizations, many of them under the auspices of the United Nations, broach just about every subject you can imagine. There’s even an International Seabed Authority for overseeing mineral-activity rights in international waters, which cover the vast majority of our planet. The ISA was only established in 1994 to show you how recent globalization really is.

Come Together by the Beatles, Bob Marley with One Love or Michael Jackson singing Heal the World. Music appealing to bettering and unifying the world is a popular topic. Integration and pulling down the barriers between peoples is at the heart of many projects. Medecins Sans Frontieres (Doctors Without Borders), and other ONGs travel the world to aid the needy. From seabeds to music to aid when catastrophes strike, globalization is a reality.

The challenges of globalization are major and most of them revolve around governance. Above I mentioned the International Seabed Authority. Without some sort of authoritative and virtuous rulership, anything goes, and that leads to chaos. One of the key clashes of globalization is immigration. Two opposing forces are in play. On the one hand, there’s talk of integration, people living together in harmony and on the other family ties, clan cultures, and national ethics keep people separated.

People don’t like to have their own way of life upset. A straightforward example of this is in your home your family has a comfortable routine. You welcome and are pleased to have guests, but only for so long. You yearn for your private ways, customs, and routine. Well, immigration is having guests in your country. It is difficult both for the guests and the hosts.

In your home, your family has a comfortable routine. You welcome guests, but only for so long. You yearn for your private ways. Immigration is guests in your country. It is difficult both for the guests and the hosts. Click To Tweet

Under the above hardship conditions people can get up and leave in droves and they are obviously drawn to the have nations with some of the following pull factors: Better climate, better living conditions, education, family links, employment opportunities, security and the feeling of having more freedom politically and/or religiously.

Boat people on all the seas worldwide,  Displaced war refugees, famine, economic woes (Venezuela), political turmoil (Yemen, Afghanistan), national upsets (Ukraine), ethical turbulence (Kurds, Burkina Faso) difference and indifference, religious strife (India), territorial disputes (Israel), natural resources (Africa-Congo), This is evidence that something is sadly going wrong. Qualified governance is lacking. This is pushing migration and ascerbating globalization. Can we expect to have coherent globalization when we lack national cohesion? Today, immigration is a result. Because of living conditions, an inordinate desire to migrate is the origin of the problem. 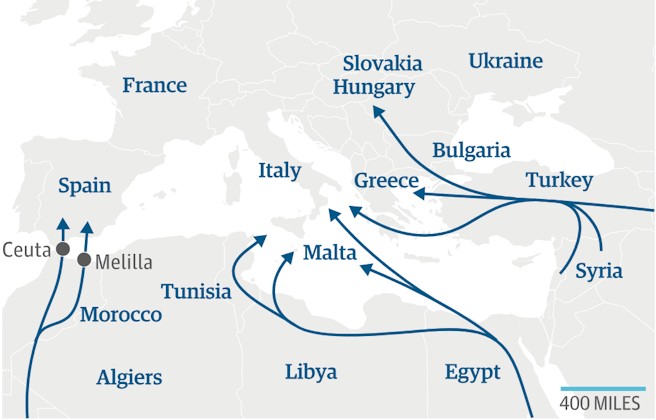 Migration routes to Europe considered the Eldorado for peoples from poorer nations.

In the context of how would you bring peace and prosperity to Earth? immigration poses one of the most complex sets of problems of any social issue faced by Earth today.

In Inventory of the Universe, I highlighted how interwoven all the systems and processes that run the Universe, planet Earth and our bodies are. How each depends on the whole. In the same way, in Audit of the Universe, you cannot isolate and treat one factor, like immigration, to solve a problem.

Put another way, you can’t take one piece of a puzzle and clean, paint, adjust, do a makeover and simply put it back in place (even if you knew where its place is) and expect the entire puzzle to be taken care of. It’s like replacing a rusty girder… the other girders are going to give way and you have a mish-mash of old, renovated and new. The structure of human society is multi-faceted.

Below are a couple of quotes from Paddy Ashdown, Veteran Diplomat, former UK political leader and Knight Commander of the Order of the British Empire.  He homes in on the seriousness of the times we live in. I suggest you watch the short video:

This is one of those terrifying periods of history when power changes… And these are always periods accompanied by turbulence, and all too often by blood.

Here’s a video by Trevor Phillips, who was responsible for aspects of integration in the UK. He confronts some uncomfortable truths about racial stereotypes which he had to come to grips with. He asks if attempts to improve equality have led to serious, unwanted negative consequences. It addresses issues of race and religion, which are a large part of the basis of the clans and nations I referred to. His conclusions give a glimpse of the flip side of globalization.

Here’s another excellent resource about globalization if you want to deepen your comprehension of this vast subject.

Bringing all of humanity closer together so that we can live peacefully on planet Earth is certainly a dream we all wish for. In fact, many people’s and organizations’ main thrust is exactly that purpose. It is exactly the same goal The Explanation has set out to answer by asking the question, How would you bring Peace and Prosperity to Earth? It all comes down to establishing proper human relationships. Easier said than done. But, done, it will be.

This blog post is an excerpt from chapter 6.13 of the book Audit of Humankind.

Since you read all the way to here… you liked it. Please use the Social Network links just below to share this information from The Explanation, Globalization: Integration Versus Segregation of People