Science and Theology: Agreement on Real Evidence for Big Bang 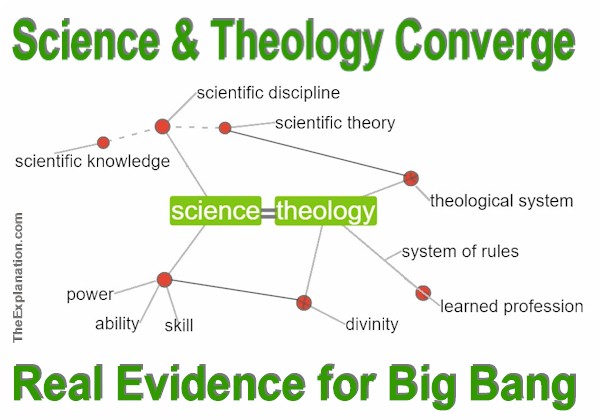 Science and Theology. Is it reasonable that the Bible refers to Big Bang—which would make it an astounding book? Look at the Biblical and Scientific evidence and see what adds up.

Science and theology lead to the same conclusions. For many, that is an ambiguous statement to swallow. Both say they’re uncovering the truth, so how many truths are there? Of course, we’re talking about real facts, not fallacious pondering, which can be the outcome of both scientists and theologians. Let’s summarize what the last nine blog posts have shown us.
(Origin of the Universe, chapter 6.10)

Over the previous nine blog post, I’ve developed Biblical Theology to reveal what Biblical Hebrew tells us about a particular aspect of Creation, that of Big Bang. I suggest you review these previous blog posts referring to how God’s finger worked in the formation of the Universe (from the Bible, whether you believe it’s fact or fiction). We have seen that when God ordained the stars, the Biblical Hebrew means fashion (blog 1).

Biblical Hebrew words tell stories, here about science and theology, and I’ve shown you how they uncover Big Bang. Not just one word in one verse. But multiple words in multiple verses. Different biblical contexts that corroborate each other and point us to evidence for Big Bang in the scriptures.

Today, we conclude this fascinating subject of the Biblical description of the Big Bang Universe and astral bodies which ties together science and theology. We’ve learned a lot of new points you’ve never seen or heard before. But this is only the beginning of your adventure through Genesis.

If you’ve come across this blog post for the first time then please know that it is part of a larger work. To see the entire context, which you can read online, click here.
You can follow along by using the online Bible, the Interlinear Bible, Strong’s Concordance and the Hebrew/Greek Concordance at UnlockBibleMeaning.com
To understand how I’m using Biblical Hebrew, read this short presentation of 7 keys to Master Biblical Hebrew
Dig for Bible Study gems to enhance your understanding: See ‘Further Study’ suggestions at the end of this blog post.

We know that many astronomical bodies are in constant change. Black holes, for instance, are the implosion of gaseous matter after it has reached its maximum expansion. It is like throwing a ball into the air; the impulsion will take it just so far into the sky, then gravity will draw it back to the ground. Imagine gas and other materials expanding and then contracting around a central point, that forms a black hole.

Big Bang is the initial spurt, but subsequently, it is a continuous and constant process of formation until it reaches a certain equilibrium, and parts stabilize. Given Big Bang, scientific data indicates our planet Earth acquired such stability some 4.5 billion years ago. That is 9.2 billion years after Big Bang; this is not to say that some transformation has not taken place since. As we shall see, this was the case, but at that time, Earth took its place, like the sphere, we now know, in the Universe.

I point out that the Bible states these aspects of the Big Bang years and years before scientists even wondered about it, let alone had the means to investigate such questions. Fairy tale or tale? Keep reading, the Book, and especially its Author have much much more to offer.

I point out that the Bible states these various aspects of Big Bang years and years before scientists even wondered about it, let alone had the means to investigate such questions. Click To Tweet

Galacti is sitting there mesmerized, mouth ajar, wondering, can this be? Sam, these last posts have been quite a Bible study, the in-depth meanings of the Hebrew roots open up avenues we’ve never discovered before. The multiple meanings the various contexts attribute to the same Hebrew roots is both exhilarating and disconcerting.

OK, guess I’ll be patient, in the meantime, this is mind-boggling, what a poignant description of creation, in just a few short Hebrew root words the whole Universe opens up to us. Science and theology when you assemble them correctly. Galactic stands and shuffles over to the window staring up into the starry sky, thinking…

This study indeed leaves much food for thought. If the Bible does tell the story of Big Bang creation, then there are serious questions and conclusions, we need to broach regarding both Science and Theology.

In the book Inventory of the Universe chapters 1 and 2, I related the story of Big Bang from the scientific point of view. The bottom line is: Something unimaginably minute containing all the matter and energy in the Universe (that in itself should make you stop in your tracks) exploded. This explosion, some 13.7 billion years ago, created space and time and is still expanding at a faster and faster rate.

The 90 minute documentary Into the Universe with Stephen Hawking, which I’ve embedded below, gives an account of this incredible story. It parallels and ties in very well with the Biblical evidence. Science and Theology do see eye to eye. There is a convergence of evidence.

Science and Theology on Perfect Imperfection and Surprises

I would like you to note the number of times in this documentary Hawking makes statements like Thankfully; it was imperfect. That’s why I’ve entitled this section: Perfect Imperfections and Surprises. Because he repeatedly refers to them. Here’s just a smattering of them with the time they appear in the video:

3.28 The facts are so breathtakingly elegant and surprising.

4.15 The most remarkable fact of all is that the Universe materialized out of nothing at all.
4.50 We may only be advanced monkeys but we can contemplate the Universe as a whole, which makes us something very special.

9.40 It sounds strange, but space didn’t exist then (before Big Bang) either. There was no outside; the only space was inside.

10.00 This early Universe was a really strange thing indeed, there’s much I’d dearly love to know about it.
10.45 The Universe simply inflated into existence. (sk: Wow, what a simple surprise).
11.50 It seems as if building the Universe is a pretty wasteful process (sk: because matter and anti-matter annihilate each other).

12.15 Fortunately, there was just a bit more matter than anti-matter, just 1 in a billion particles survived, which was lucky for us for that’s what our present-day Universe is made of.
12.38 You could say we’re made of the smoke of the Big Bang.

13.20 that’s how the Universe got going … and is probably stranger than any of the stories our ancestors came up with by way of an explanation.
13.35 The next thing that happened was pretty spectacular too. Over 14 billion years the Universe was built, atom by atom, all of this celestial engineering on a spectacular scale.

14.25 What drove this cosmic clockwork? I’d say it was gravity. All things come together through the power of gravity. Gravity was created in the Big Bang. (sk: What are the chances for gravity’s perfect power? Interesting how Hawking uses the word ‘created’).

16.20 Gas was spread out almost perfectly throughout the Universe. Even this almost didn’t really happen. If it weren’t for another stroke of cosmic luck, there would be no you, no me, nothing.

18.15 Here’s where luck comes in … fortunately, one of the basic rules of the Universe is that nothing is perfect. Perfection simply doesn’t exist. (sk: Wow. that’s why I’ve called this ‘perfect imperfection’).
18.55 The early Universe had a tiny unevenness.

19.30 The tiny irregularities … have given gravity something to sink its teeth into.

20.30 The Universe became the beautiful place it is today, all due to irregularities, imperfections, a lack of order.
20.40 Without imperfection, neither you nor I would exist.

You can watch the rest of this video. You see what I’m pointing out regarding Hawking’s explanation. Every single perfect and imperfect action had to fit together perfectly to become the Universe. There are quite a few imperfections, and every one of them is essential and necessary to arrive at the result we have today: Origin of the Universe and Humankind.

According to Hawking, there are quite a few 'imperfections' with Big Bang. Yet every one of them is essential and necessary to arrive at the result we have today: Origin of the Universe and Humankind. Click To Tweet

Without just ONE of these imperfections, nothing of this kind would be here today. Even the slightest change in any of these phenomena would lead to the non-existence of all that is present today. These so-called imperfections had to be perfect to the infinite degree. Particles of matter had to outnumber those of antimatter by precisely the right amount to exist and coalesce into atoms, molecules, and ultimately stars and planets and you and me.

View the video and find other Perfect Imperfections.

Now we’ve got to ask ourselves this question: What are the odds that so many imperfections could be so perfect? And the apparent answer is ZERO. I’m not a statistician. Still, I’d say you have a far, far greater chance of seeing your name pulled out of a hat which contained all the names, of every person on the face of Earth, and every single object in the Universe, than the Universe, had for coming into existence.

I submit to you that for so many perfect imperfections to be accurate, something is going on. Is there some ‘outside force‘ putting physical forces into play ‘just right’ so that our physical Universe can come into existence? Some are maybe smiling when I talk about outside forces. Still, numerous people know that outside forces exist, even if they can’t explain their nature like Elizabeth Gilbert and Ruth Stone–two very rational human beings.

You can decide whatever you want. I’m just presenting you with some evidence from science and theology; you may not have realized they’ve uncovered. These are more pieces of the puzzle that both Inventory and Audit of the Universe have been putting on the table and turning right side up. Origin of the Universe, of which this Big Bang series of blog posts is a part, will assemble that evidence and answer the big questions about life.

Science and theology and sociology and all the other …logies converge when you peel away the conjecture, presumption, and speculation. You need to consider whether the Bible, including this obscure book of Job, should be regarded as valid pieces of the puzzle.

Next week we start investigating the meaning of Genesis or Beginning, Bresheet in Biblical Hebrew. Ready for more eye-openers?

This blog post is an excerpt from chapter 6.10 of the book Origin of the Universe.

Since you read all the way to here… you liked it. Please use the Social Network links just below to share this information from The Explanation, Science and Theology: Agreement on Real Evidence for Big Bang