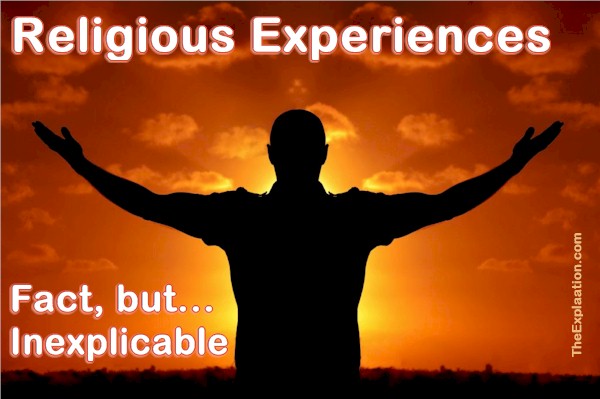 Religious experiences exist. Many people go to great lengths to seek them out. They can be life-changing moments. What’s it all about?

Religious experiences happen in people’s lives. They are fact but inexplicable.

Religious experiences are at the heart of movies. Last night I was zapping the TV channels and ran across an action fiction which I later learned was entitled Babylon AD. As I write the section on religion as a means of how humans reason to bring peace and prosperity to Earth, it struck a chord. There were two religions fighting over a virgin who died on giving birth. What will imaginative minds come up with next?!
(Audit of Humankind, chapter 5.17)

Religion is used and abused. Even if it is supposedly founded on a Just and Righteous All-Powerful and All-Seeing God, religion, as taught and practiced by humans has all the shortfalls of the other methods of reasoning observation, philosophy, and science. We’ve seen the tip of the iceberg of its extravagance. But there are positive sides as well, thankfully.

There is much controversy around the Bible. This book is the bestseller of all time. It is the most maligned, and the most respected at the same time, by millions of people on both sides of these strong feelings.

Why talk about the Bible? From an Abrahamic point of view, which is far and away the majority influence in the West, the book represents the stepping stone of their religion. No matter where they place themselves on the chessboard of belief. Many religious experiences relate to the Bible.

We are going to be discussing Dr. Jordan Peterson’s approach to the Bible as well as certain of his conclusions. Why him? Because he tackles the book positively as an unsolved mystery. He focuses on pieces of the Bible and takes them apart with ax stroke precision. He is extremely quick-minded, very knowledgeable, and brings the Bible down to a clinical level being the psychologist he is.

He refers to religious experiences that can be brought on by psychedelic drugs, when he points that you can be controlled by things beyond your conscious mind. It’s like a plurality of personalities that the ancient peoples thought of as gods. Like rage could be Mars, and these stories get passed on, and the book of Genesis is an attempt to preserve them and to understand what humans are. This video gives the details and is certainly worth watching, as is the series.

Thoughts appear in your head and we don’t have a sophisticated way of explaining that. There are things inside you that are happening that control you instead of the other way around. He asks some deep basic questions. There are manifestations of spirits, so to speak, inside you that determine the manner in which you walk through life. And you don’t control it. And what does? Is it random? You know, there are people who have claimed that dreams are merely the consequence of random neuronal firing, which is a theory I think is absolutely absurd. Because there’s nothing random about dreams. They’re very, very structured and very, very complex.

I know that the evidence for genuine religious experience is incontrovertible. It can’t be denied or disputed. But it’s not explicable. And so I don’t want to explain it away, I want to just leave it, as a fact.

As I wind up Audit of Humankind with how humans reason, I wanted to devote space to Peterson because of how frank he is. I consider those last couple of sentences of his as remarkable. He clearly admits the existence of religious experiences and that, for the time being, they are inexplicable. That’s quite an admission coming from a rational scientist. The Explanation has already written Origin of the Universe, Origin of Humankind, and Origin of Woman about where humans came from and especially what consciousness a mind are all about. These mysteries can be explained and that is the goal The Explanation has set itself.

Peterson is very open and realistic. Unlike theoretical scientists who work in labs, he’s a clinical psychologist who has a practice of talking at length and gaining the confidence of his patients. He’s talked to sincere people who share with him what’s going on in the deepest part of their bodies, brains, and minds.

One of the reasons I like his Bible expositions is that unlike many Bible detractors who focus on one small story, he goes into the underlying foundation and draws very relevant conclusions.

And it’s (the Bible) pretty barbaric, you know, I mean the story of Abraham and Isaac, there’s a good example of that because Abraham is called on to actually sacrifice his own son, which doesn’t really seem like something that a reasonable God would ask you to do, right? God in the Old Testament is frequently cruel and arbitrary and demanding and paradoxical, which is one of the things that really gives the book life because it wasn’t edited by a committee, you know, a committee that was concerned with not offending anyone, that’s for sure.

Peterson sees definite parallels of human behavior, mythology, and historical stories in the Bible that reflect who and what humans really are. For him, it is somewhat of a mystical book that contains half human dreams and the other half, articulated knowledge. It’s a human effort to record the story of humankind.

I wrote about Stephen Hawking and how he was thankful for the imperfections needed to establish the Universe we have today. In a similar fashion, while Peterson doesn’t believe the Bible, he recognizes there are remarkable phenomena about the contents of this book. He’s a rationalist, so he’s looking for scientific provability, for Biblical statements. We know that can’t be done, hence its unacceptability. Despite that, his truthful analysis brings forth some eye-opening facts:

At the end of the video, in answering a question, Peterson states the following. This is very revealing. Probably there should be less religion and more open-mindedness to what the Bible is trying to tell us.

I can’t tell if I’m an advocate of the religious viewpoint or its worst possible critic. Because I am doing my best to make it rational, and there’s a reductionistic element to that. But I think that I’m doing that while also leaving the door open to things that I don’t understand. Because that there’s more to this story than I understand or can understand. And I’m laying out what I can understand and I’m making it rational, but I do not believe for an instant that that exhausts the realm. It’s like there are ways of interpreting these stories that work in the conceptual universe we inhabit right now. But there’s a lot of things that we don’t understand.

One thing I found about digging into these stories is that the deeper you dig, the more you find. This is like an accelerating Universe… it should be the opposite… the more you dig out gold the less there remains … here it’s the inverse! And that’s one of the things that convinced me that there was more to them than I had originally suspected. Because things would click, and I’d think, wow, that’s really something. And then I would take it apart further, and I’d think, oh, well, I thought THAT was something, but this is even more remarkable. It just keeps opening and opening.

This book and the religious experiences it evokes in readers, believers, and disbelievers are maybe deeper than we’ve realized. The Explanation will be taking a much closer look into its content and meaning.

Religious experiences are real. Where do they come from and their meaning are questions few, if any, can answer. Yet people can base their lives on such revelation.

This blog post is an excerpt from chapter 5.17 of the book Audit of Humankind.

Since you read all the way to here… you liked it. Please use the Social Network links just below to share this information from The Explanation, Religious Experiences. Fact But Inexplicable