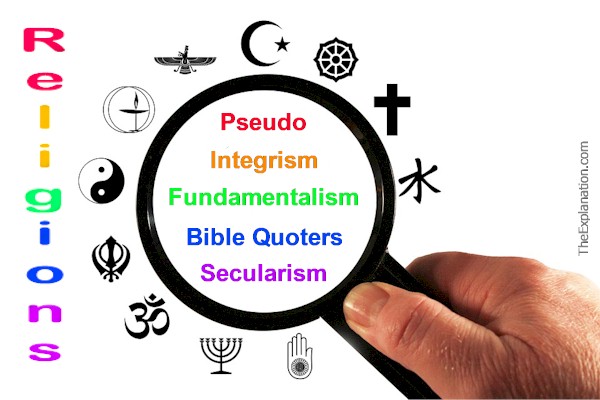 Religions are plethoric. All types, shapes, and forms. Believers can quote scripture, not attend Church and identify themselves as spiritual.

Religions come in all shapes, sizes, and forms. There are all the colors of the rainbow.

Religions come in a pseudo format and a secular format. And every shape, size, and color in between. Extremes fire society worldwide pitting religion against religion, anti-religionists against pro-religionists. Whether we like religion or not, plethoric religions play a central role in world affairs in the 21st century.
(Audit of Humankind, chapter 5.16)

I like to survey religion and Bible-oriented groups on Facebook. It’s a quick way of learning what’s going on in the world of religions. Mostly Christianity, and mostly among outspoken people. Or, at least those who feel they can hide behind a computer keyboard. One of the trends that never ceases to amaze me is that for whatever opinion is expressed, there’s always someone who’ll contest it and/or come up with an opposing point-of-view. if the discussion develops, this is often coupled with a certain amount of vehemence. In religious circles this is surprising, but expected, I suppose.

Fringe religions tend to focus on their special viewpoint, oftentimes a narrow sliver of the entire picture. For instance, the name of God, even the pronunciation of that name, Yahweh, Yahveh, YHVH, Jehovah, Yehovah… Along this same line, there are the Hebrew roots movements proposing the return to first-century Christianity as practiced by Christ’s initial Jewish converts.

The Explanation is addressing this issue of multiple religions because this is a principal way humans, across the planet, reason when it comes to how to lead their lives here and now. Maybe, in preparation for their afterlife… about which, there can also be hot debate. The point is, can this multitude of religions bring us world peace? Do their teachings show us how world peace is going to come about? Or reveal how we could live more in harmony today?

After all, isn’t that the goal of religion? And hopefully all manners of reasoning like observation, philosophy, and science we’ve discussed in this final chapter of Audit of Humankind. Without sounding pessimistic. We’ve had relative peace since WWII, that’s over 70 years. No worldwide conflicts. But these methods of reasoning haven’t stopped over 42 million war-related deaths during that time. In fact, religions have been the cause of a lot of this turmoil.

Most of the differences between religions will not cause physical injury, but it can cause arguments, heartbreak, split groups, and torn apart families. That’s neither family, community nor world peace.

Pseudo-religion parades as a religion but is generally characterized by a couple of descriptives. At best it’s an offshoot of some more main religion with a mixture of local rituals. Also called syncretism. It can be a branch of Catholicism to which has been added local deities and customs like in some South American or Indian communities. This can include groups founded by a charismatic leader with esoteric traditions like New Age.

Integrism or Integralism is less known but has powerful undertones. It is political religion that doesn’t openly wield power but work through elected or established political authority. Morality is necessary for the integrity and peacefulness of governing a state. Leaders have a choice of creating their own moral code and imposing that as a standard. Or, they can work with an established religion and apply their code of ethics for the population. This was an essential part of rulership in Europe during the Middle Ages with a powerful Catholic Church creating alliances and treaties with national states.

In the latest European election in France, there was a front-page article about Francois-Xavier Bellamy of Les Republicains political party and other influencers and their Catholic backgrounds and how they’re working to bring back some moral hegemony. They didn’t fare very well from a political point of view. But this is only one episode in a much longer campaign.

Fundamentalism is getting back to the essentials, or basis of religion. In Christianity, this means rooting yourself in the Bible. Fundamentalists promote the inerrancy of the Bible. They tend to focus on extravagant phrases pulled from scripture. Such phrases can and often are correct. “Jesus is your Savior,” “The Return is imminent,” “Jesus Saves,” “Repent.”But there is generally no, or very little, context around these “End of the World” predictions.

These people can be rather loud in proclaiming their messages. With TV and radio access readily available today, their Evangelists have programs for all tastes. One of the central themes of this group is their desire to preach God’s Word to everyone. Some can be aggressive in their push to convert. They’ll be handing out tracts on street corners or trying to garner you as you walk down the street with an inviting phrase. They are very convicted people and can be persuasive with their efforts.

Bible Quoters is a term I coined for those on the Internet in all religions. They simply quote a Bible verse and dress it up with nice decoration. The idea is to inspire you regarding Godly and Bible subjects. Sometimes they are accompanied by some commentary, other times there can be a lesson in love, humility, effort, forgiveness… Obviously, scripture has value, at least for those who adhere to such groups. I just wonder about presenting isolated passages this way. How helpful is it, really?

You also have your theology groups where the debating can get hot and heavy. I’ve made a comment or two in some of these forums but have had little or no interest. Maybe it’s my phrasing but, although I read commentary from time to time, I’ve totally backed off of this.

Secularism is the practice of doing good and quoting a Bible verse to back it up. These people might not belong to or practice any of the classic religions. They belong to a group that is spiritual. They know there’s something out there, they’re not sure of what it is, but it’s an important life influencer. To resume it in a few words, their motto is “Love your neighbor.” And they are right, you should love all people around and even beyond your immediate circle.

Many people are involved in voluntary programs, freely helping those with fewer means in society. They are giving selflessly of their person for, in most instances, some very charitable and helpful causes. It certainly is laudable, and thankfully progress is being made due to this sacrifice and effort. Volunteers are always needed and there is much to accomplish.

This is just a short presentation of the innumerable religions there are, be it in Christianity, Judaism, Islam or any of the other religions worldwide.

Here’s a thought in the midst of all these interpretations, practices, traditions, preachings, and teachings. If there is a Powerful God. A God who is good. If God is Truth. If God created the universe and put humans on Earth. If God used humans to write the Bible. If the Bible were God’s Word.  if, if, if. What does He want from us? Yes, there’s the WHY and the HOW. But we can get into everything now!

He gave two great commandments. Love God. Love your neighbor. In that order.

Doing good and doing the best you can are certainly to be honored. They are, without a doubt, an essential part of our life and our responsibility to those around us, near and far.

However, the first and foremost commandment is Love God. And the question is what does that mean? Yes, loving your neighbor is part of that first commandment, but it is separate from it. Loving God involves some other ingredient(s).

Is it focusing on a specific aspect of the Bible? Is it getting involved in politics to promote religion? Is it getting back to first-century Christianity, like the Apostles used to practice? Is it quoting and promoting scripture? Is it limited to practicing good?

Will any one of these or any combination of these bring about peace? I’m not saying they can’t be helpful. Sure they are. But beyond that, if there’s a God, what is His Will? That is the question The Explanation has set out to answer.

This blog post is an excerpt from chapter 5.16 of the book Audit of Humankind.

Since you read all the way to here… you liked it. Please use the Social Network links just below to share this information from The Explanation, Religions, All Types: Bible Quoters, Pseudo, Secular