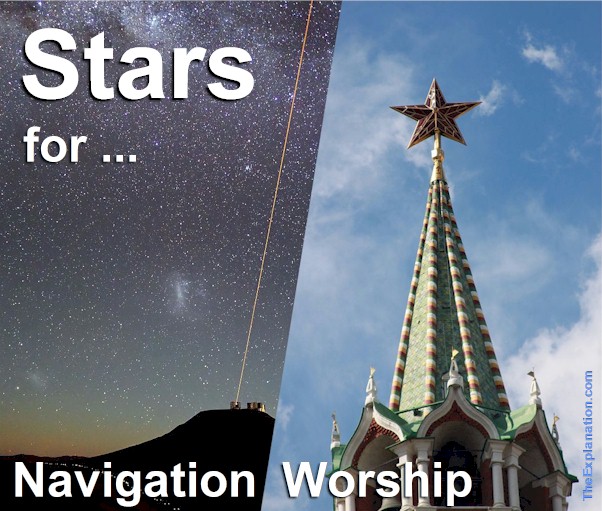 From atoms to astral bodies: sun, moon, stars. They light up our sky, and both awe us and leave us quizzical with their grandeur and mysterious presence.

Humanity uses the Sun, moon, and stars for navigation and worship.  They light up our sky, and both awe us and leave us quizzical with their grandeur and mysterious presence.

Just as we’ve gently led our travelers on a journey to find all the puzzle pieces—with many more before we have the complete picture—so the stars have directed humans to find their way.
(Audit of the Universe, chapter 1.2)

We watch sailors using Ptolemy’s maps and then orienting themselves north or south by observing the positions of major navigational stars. The North Star or Polaris, which we find in the Little Dipper (Ursa Minor) constellation, itself a navigational point, and the Southern Cross that points towards the celestial South Pole.

The North Star never moves, in contrast to the surrounding stars, so that it is a fixed point for seafarers to determine their latitude; in fact, no matter what your latitude, you can view the North Star at the same angle in relation to the horizon. As we look into the sky, we observe the North Star.

Someone uses a GPS to read our latitude. In centuries past, he might have used an astrolabe, a spherical handheld analog calculator that contains a moving disk to represent the position of the stars. Or a cross-staff, which uses several vanes or slats sliding on a central staff to measure the angles between stars and the height of the Pole Star and the sun.

Galacti has produced replicas of these, as well as the back-staff, a device outfitted with mirrors so that when we look through the sight vane, with the top ‘lens’ or vane reminding us of a submarine periscope, we can see Polaris. In the daytime, we can view the Sun without any harm to our eyes.

Look at the GPS, with its easy digital readout, and compare it with the ancient navigation tools. Both are obviously of human origin, but very different. The GPS doesn’t use the stars in any way to determine our latitude. So you might think. But consider this: a satellite and this computer receiver have replaced the astrolabe and the back-staff.

We all agree this is something to consider. We never have before thought of this. Likewise, we have never thought of something else the sun, moon, and stars have provided us with: the calendar.

We have discussed the seasons, which man could observe unaided without calculation. The calendar, however, is another matter. We can watch the orbits of the Earth and Moon to count days, and we now know that it takes 365 days for the Earth to complete its orbit around the sun.

Imagine we are ancient Chinese, Babylonians, Hebrews or Greeks. While we observe the change of the seasons, we watch the phases of the moon. The lunar phase cycle is 29.5 days or a month, and during our accelerated month, we observe two full moons. We soon discover, however, that there is no fixed number of days in a month, unlike the solar calendar.

Also, we learn that a lunar calendar year is thirteen months to match the seasons, in particular the harvests. Ancient farmers needed the moon, as well as the solar calendar, to tell them when to plant and when to harvest. Also, the phases of the moon are associated with specific festivals and celebrations of the passage of life. While this may sound complicated, the lunar months are still part of the Jewish calendar; each month begins on the New Moon. Stars are not involved in the calculation.

Imagine living by the lunar calendar, and performing astronomical calculations to mark the passage of months (as the Egyptians did), and marking religious observances and agricultural cycles by the phases of the moon. Our observers talk about stories and beliefs they’ve heard about the moon, stars, and sun, dating back to ancient times.

“You humans believe in good or bad omens,” Galacti says, shaking his head, “I’ve been reading up on it, accessing the library of the universe. You’ve seen the composition of a star and the Big Bang. Who can honestly tell me you believe in omens or divine favors as you call them? Seeing a halo around the sun and believing it foretells rain? Wishing upon a shooting star, for example? Anyone here from Chile?” A woman who admired our South American plants in Inventory of the Universe, Chapter 5, raises her hand. ”It’s said that if you see a shooting star in Chile, you will have a year of good luck.”

This lady from Chile has heard this tale but never given it much thought.

We all pause to consider the cultural omens and stories we learned. For example, the positions of stars and lunar eclipses often herald the birth of a major world figure. We ponder every belief, including the warning that a full moon on Christmas Day will bring bad luck.

The ancient Greeks worshipped meteorites, which they thought represented the stone Zeus’ father, Cronos, swallowed instead of Zeus, whom he thought would dethrone him. Many Greek temples enshrined meteorites as objects of worship. Meteorite veneration exists in many cultures on Earth. Why would a rock from the heavens become something people pray before?

Planets as well became signs of good luck and the gods. The Babylonians associated Jupiter, Venus, Mercury, Saturn, and Mars with their deities. If Babylonians could read and interpret the motion of the planets, they could understand and predict significant world events. Even the New Moon, which was not associated with any god, was a source of study—if it appeared earlier than expected, cattle or crops would fail and die.

The Earth revolves around the sun, which gives the sun a premier place in the universe. The sun is the source of life, determines the seasons, and is essential to life on Earth, which is why it is commonly associated with power, for example, as the Eye of Zeus in Greek mythology and linked with Egyptian gods. Japan is called the Land of The Rising Sun, and King Louis XIV of France called himself The Sun King.

To see the sunrise at Stonehenge on the winter solstice signifies that the following year will be a favorable one. Galacti observes that even sun tanning acquires a bit of an exotic mystique, as sun-worshippers who deliberately tan are trying to project success, a tropical and desirable lifestyle–through exposure to the sun has many benefits in improving health and mood! In any case, sun signs populate the world, most notably in astrology.

This blog post is an excerpt from chapter 1.2 of Audit of the Universe.

Since you read all the way to here… you liked it. Please use the Social Network links just below to share this information from The Explanation, Sun, Moon, Stars – From Atoms to Astral Bodies – Grandiose and Quizzical