The Space Station, a Step to Colonizing the Moon and Mars 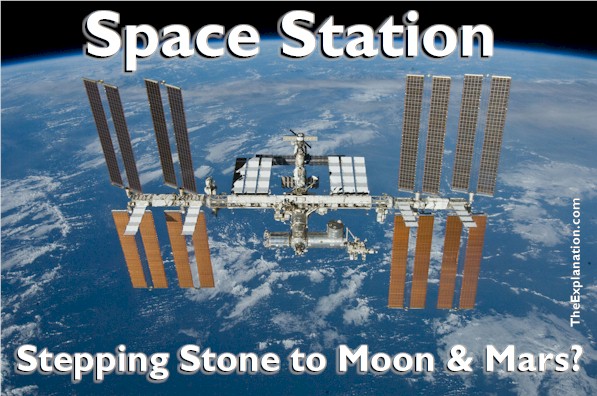 Space stations are no longer science fiction. The ISS has been host to over 330 men and women from 17 countries since its inauguration in 1998. How much do we know about space?

Space stations are no longer science fiction. The ISS has been host to over 330 men and women from 17 countries since its inauguration in 1998.

Space stations are no longer science fiction. The ISS has been host to over 330 men and women from 17 countries since its inauguration in 1998.

We’re off to the space station, strapped into a luxury space tourism shuttle such as Sir Richard Branson’s Virgin Galactic or some other spacecraft that might win the X-Prize. While we stare into the view screens at our seat, which gives us images of our journey as well as access to the digital library of the universe, we think about the actual exploration of space and the discoveries we have made.
(Audit of the Universe chapter 1.4)

The Kepler Mission, an uncrewed spacecraft, has discovered several new planets in the Kepler-22 star system inside our Milky Way galaxy. The automated Mars Rover ‘Opportunity’ has unearthed discoveries in the 14-mile-wide crater named Endeavour. Japan’s Hayabusa spacecraft has visited the asteroid Itokawa to bring back samples.

There are two private inflatable space modules, Genesis I and Genesis II, currently in orbit around the Earth following their 2006 and 2007 launch, respectively, by the private American firm Bigelow Aerospace.

The international orbital laboratory opens its doors ‘so to speak’ so that visitors can see the real-life of the ISS—24 hours in space. The front end of the ISS, which houses the space shuttle docking hatch, displays the flags of the fifteen nations involved in creating this monument to international cooperation.

An astronaut aboard the ISS explains what it is like to begin the day in space. For example, our audience wants to know: how do you wake up, how do you brush your teeth?  The same way you would on Earth, except instead of rinsing out in a sink, the astronaut uses a disposable towel provided by the Russian Space Agency. The astronaut uses the brightly colored towel to catch the saliva. Afterward, he can even shave inside his small quarters.

Our astronaut wears ‘normal’ street clothes while aboard the space station and doesn’t change them very often, especially since the environment of the space station is more sterile than the streets of wherever the astronauts’ home cities happen to be.

Time to start the day and go to work. Our astronaut may update computer equipment much as IT departments would on Earth. Alternatively, our astronaut may check life support systems and make sure that the electrolysis, the process by which electricity generated by the station’s solar panels splits water into its components to ensure oxygen for the ISS inhabitants to breathe.

Our astronaut may assist scientists from all over the world in doing research, such as developing vaccines for MRSA and Salmonella bacteria. Or the astronaut may participate in a spacewalk to maintain the Hubble Space Telescope. Russians, Americans, Canadians, all are working in this community, shielded from the vastness and coldness of space.

It is stimulating and inspiring to think that astronauts from different cultures and countries can live and work in the space station, 24/7, in cooperation with each other, in harmony. On Earth, a multinational effort from France, Japan, Russia, America, Canada, French Guiana, Germany, the Netherlands, and Italy supports and maintains the ISS program.

Given space being so vast and since we haven’t achieved the old science-fiction ideals of putting colonies on the Moon, one traveler wants to know whether what we’ve accomplished is real progress. After all, establishing a settlement on the Moon would be a good testing ground for building one on Mars. What do we really know about space?

I said we weren’t going back to the pinhead, but it deserves a brief revisit, as we think of all the matter and energy in the universe–everything in that pinhead–all summed up in a neat little package The Theory of Everything.

Scientists now know that there’s a substance called Dark Matter. Our space shuttle is looking for it, like a kind of Dark Matter Safari. We’ve never observed this, we don’t know where it is, in the atmosphere or outer space, but valid calculation, deducted from gravitational effects on visible matter, has evidence that it has to be there. In fact, it represents 27% of ALL the matter in the universe,

Extremely hard to believe, even unimaginable, but it’s a fact.

In our dark matter safari, we also seek the substance called Dark Energy. Again, it’s elusive, like a rare species that never shows itself; however, still realistic computations from the accelerating expansion of the universe show that it represents 68% of ALL the energy in the universe.

Again, this is extremely hard to believe, even unimaginable, but it’s a fact. The universe, scientists believe, is composed of the two elements Dark Matter at 27% and Dark Energy at 68%.

That’s 95% of everything in the pinhead at the Big Bang.

One of our passengers examines a test tube containing a soup that represents the remaining 5%: all the atoms, protons, mesons, baryons, quarks that we can observe, albeit not with the naked eye and measure to deduce mathematical equations and theorems. But suppose the visitor reduces that soup to 0.4%, the part of the universe we can actually see. It’s like taking four pieces of a 1000 piece jigsaw puzzle–with so little information, can we really figure out what the universe truly is and all the details that make it work?

“Imagine basing the ‘Theory of Spaceflight’ or ‘The Theory of a Dolphin’ on such scant knowledge,” Galacti comments, eliciting laughter. “And yet we have those theories. We have a ‘Theory of Everything’ because when computers predicted the weather for this launch, we may have had a bit of difficulty, but the system worked. Or did it?”

To an extent, within a few hours, we can predict the weather, but even there, we often come up short despite the powerful computers at our disposal. We are the most advanced and progressive generation scientifically since man walked the Earth, but studying with only 0.4% of the universe we’re in for many, many, many surprises.”

This blog post is an excerpt from chapter 1.4 of Audit of the Universe.

Since you read all the way to here… you liked it. Please use the Social Network links just below to share this information from The Explanation, The Space Station, a Step to Colonizing the Moon and Mars