Formation of Celestial Bodies – One Biblical Hebrew Word Says it All 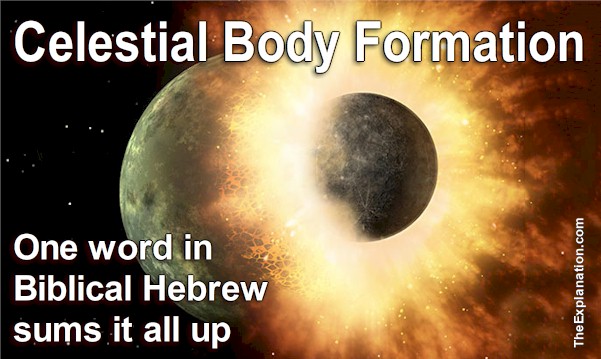 Celestial Bodies, the Bible says God created the heavens. Maybe it’s a fairytale, but there’s one Biblical Hebrew word that sums up their formation process—exactly like science has discovered.

How to form celestial bodies. One Biblical Hebrew word sums up the process. Hard to believe? Yes, but read on and see for yourself.

Formation of the Universe

What became of the finely beaten powder we discussed in last week’s post? Those elementary and composite particles which became atoms and molecules?

We reach the development of celestial bodies. Does the Bible say anything about this fascinating subject? As you can now imagine, it certainly does. We’re going to scrutinize two translations of yet another verse in Job.
(Origin of the Universe, chapter 6.7)

If this is your first time at this blog, I suggest you review these previous blog posts referring to how God’s finger worked in the formation of the Universe (from the Bible, whether you believe it’s fact or fiction). We have seen that the Biblical Hebrew when God ordained the stars = fashion (blog 1). Furthermore, ordained = firm and stable (blog 2), garnish = royal pavilion and formation (blog 3), formed = dancing sand particles (blog 4), crooked = fleeing constellation, snake = hissing (universal echo) (blog 5) Stretch out = space like a 3-dimensional tent, curtain = fine beaten powder, the composition of the Universe (blog 6).

In a translation of the Bible, a single Biblical Hebrew word can NOT be rendered each time by one of your single native language words. If that were the case, the King James Translators would’ve done it–in far less than seven years it took them. Such a translation would obliterate the richness and depth of meaning of each Biblical Hebrew word. My goal is to help you dig out those nuggets and mine Bible Meaning.

If you’ve come across this blog post for the first time, then please know that it is part of a larger work. To see the entire context, which you can read online, click here.
You can follow along by using the online Bible, the Interlinear Bible, Strong’s Concordance and the Hebrew/Greek Concordance at UnlockBibleMeaning.com
To understand how I’m using Biblical Hebrew, read this short presentation of 7 keys to Master Biblical Hebrew
To fully understand Big Bang and Genesis Creation please read this mini-series of blog posts starting at the beginning.
tab]Galacti is our fictitious time-traveling, investigative, roving reporter who lends his insights and voice to the development of the narrative[/tab]
Job 37:18

One translation says the sky, our canopy of stars, planets, and galaxies—the celestial bodies—is likened to something strong, like a molten looking glass, while the other refers to a hard mirror of cast bronze. Our audience finds these descriptions to be powerful but rather enigmatic images, and no wonder. A closer investigation of these word nuggets will deepen our understanding.

Sky of Dust and Vapor

Let’s first see what the composition of the sky with its celestial bodies is from Strong’s H7834.

שַׁחַק shachaq shakh’-ak; from H7833 (שָׁחַק); a powder (as beaten small); by analogy, a thin vapor; by extension, the firmament:

We contemplate the indivisible elementary particles we saw in chapter 1 of Universe, importantly, referred to as beaten small. Here is a verse where this Biblical Hebrew word confirms the meaning of fine particles: “Behold, the nations are as a drop of a bucket, and are counted as the small dust (H7834) of the balance: behold, he takes up the isles as a very little thing.” (Isaiah 40:15). H7834 is a different Hebrew word from the one we saw in last week’s post: canopy (Strong’s H1852 and H1854), yet it has the same meaning: a finely beaten powder. In other words, another corroborative text.

The Bible uses various Hebrew words to describe the composition of the celestial bodies in space. And it corresponds with what real science is demonstrating.

The root of Strong’s H7834 is H7833, where we find to comminate (by trituration or attrition). We consult our regular dictionary, Webster’s, for instance, to see the meaning of these words. Comminate means to reduce to a fine powder; pulverize; triturate. Triturate connotes to rub or grind to a very fine or impalpable powder, to crush. Impalpable means incapable of being touched or felt, intangible, not easily perceptible by the senses; this is Strong’s definition, which he gathered from studying each and all the occurrences of שָׁחַק shâchaq H7833 (see Further Study below to see how you can do this same study).

Here’s a verse in the same book of Job that uses the comminate and triturate word: “The waters wear (7833) the stones: you wash away the things which grow out of the dust of the earth; and you destroy the hope of man” (Job 14:19 KJV); this is a significant image. Have you ever seen the dust from water-worn stones?

Galacti projects a river winding through the sky, flowing over stones. The movement of the water causes the stones to rub against each other, as they wash down the riverbed, thus grinding off all the rough edges. These edges and, with time, the stone vanish into fine, invisible sand and dust. How fitting that we should see this image in the sky, which is composed of these finest of fine powder specks–for want of a better definition–that we cannot easily perceive.

These infinitely minute particles of dust–as we shall call them for now–become the building blocks of the mighty immense masses that occupy outer space as we pointed out in Inventory of the Universe, Chapters 1 and 2.

We contemplate the verse we’re studying, “…(God) spread out the sky, (7834) which is strong (2389), and as a molten looking glass” (Job 37:18).  We envision God, via Big Bang, spreading out this impalpable dust that is strong. What does this mean? How can something we can’t feel or see be strong?

From the KJV translated words for 2389, we see that this cosmic dust can be in a hot and violent state. There’s an abundant measure of effervescence and combustion confirmed in this verse: “And he wrote in the letter, saying, Set you Uriah in the forefront of the hottest (2389) battle, and retire you from him, that he may be smitten, and die” (2 Samuel 11:15 KJV).

From the KJV Bible translated words for Strong's H2388-9 (hottest, catch, fasten, cleave, make hard), we see that cosmic dust can be in a hot and violent state. There's abundant effervescence that aptly describes star formation Click To Tweet

When we consider the root, H2388, of the above word we get a more precise, and indeed a stronger (pun intended) picture.

Since we can now know scientifically how the celestial bodies came into being, let’s see if this word, חָזָק châzâq, corroborates this formation process. We shall illuminate this sequence of events, all translations of חָזָק châzâq (H2388):

1. First of all, to form a massive body such as the moon, the dust particles must attract and apprehend or catch one another. “And the LORD said unto Moses, Put forth your hand, and take it by the tail. And he put forth his hand and caught (2388) it, and it became a rod in his hand (Exodus 4:4).”

2. Once the specks have caught each other, they must bind—fasten to each other–and we watch as they do. Then, in the company of Galacti, we return to our theater, which has become a 360-degree planetarium dome, for the Bible verse. We see holographic visions of the dust dancing across the ceiling. “So the carpenter encouraged the goldsmith, and he that smooths with the hammer him that smote the anvil, saying, It is ready for the sodering: and he fastened (2388) it with nails, that it should not be moved” (Isaiah 41:7).

3. The term cleave reveals just how intricately the dust specks fasten and interconnect. “They clave (2388) to their brethren, their nobles, and entered into a curse, and into an oath, to walk in God’s law…” (Nehemiah 10:29).

Recall the physics courses we’ve taken in high school and college. We remember that this process of 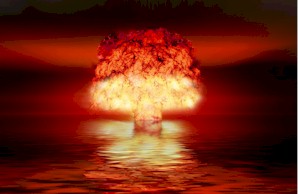 catching, fastening, and cleaving that takes place is known as fusion. It is when elementary particles transform into composite particles, then to atoms and molecules. As the atoms in a fusion bomb combine, they generate a dreadful amount of heat with a violence that is best summarized by the cloud, pictured here (and we see this image on the projection above our heads) by Ivy Mike, the first, small fusion bomb test in 1952.

Recalling the concept of the word strong in Job 37:18, hot and violent, you can see how this is a superb description of the formation of celestial bodies.

4. Skip forward in the process, and we will see as the process continues over millions and billions of years the entities are getting larger and larger. They are also cooling off, and as they do, passing through the stages of gas to liquid/molten to solid (like vapor> water > ice), until finally, at least earth became a hardened orb. That is the meaning of our root word חָזַק châzaq. “O LORD, are not your eyes upon the truth? you hast stricken them, but they have not grieved; you have consumed them, but they have refused to receive correction: they have made their faces harder (2388) than a rock; they have refused to return” (Jer 5:3 KJV).

The dust becomes strong and hardened. One Hebrew word sums up the process of the formation of celestial bodies: חָזַק châzaq–catching-fastening-cleaving-making hard–incorporates the entire process of the creation of the Universe.

Job had no way of knowing the depth of the meaning during his day–but we can today. And yes, science has helped us see how this fusion, the process of formation of celestial bodies, has been and still is going on. When you think about it, science has thrown light on a better understanding of how deep and real the Bible is.

Science has helped us see how 'fusion,' the process of formation of celestial bodies, functions. When you think about it, science has thrown light on a better understanding of how deep and real the Bible is. Click To Tweet

Does this sacred book have other discoveries to reveal to us?

This blog post is an excerpt from chapter 6.7 of the book Origin of the Universe

How Dr. James Strong composed his definitions; this is the first part of what Strong wrote in his concordance, immediately after the number, the Hebrew word, and its transliteration. I’ve called them definitions because this is what he defined after studying each and all the occurrences of a word in ALL the contexts in which each word in the Biblical Hebrew Bible appears.

You can do this same study using the Bible tool over at UnlockBibleMeaning.com. And I heartily encourage you to do so.  שָׁחַק shâchaq  in Job 37:18

Check out H7834 and its root H7833 at UnlockBibleMeaning.com

Watch this short video and compare it to the KJV translation strong in Job 37:18: חָזַק châzaq–catching-fastening-cleaving-making hard. It incorporates the entire process of the formation of the Universe.

This blog post is an excerpt from chapter 6.7 of the book Origin of the Universe.

Since you read all the way to here… you liked it. Please use the Social Network links just below to share this information from The Explanation, Formation of Celestial Bodies – One Biblical Hebrew Word Says it All