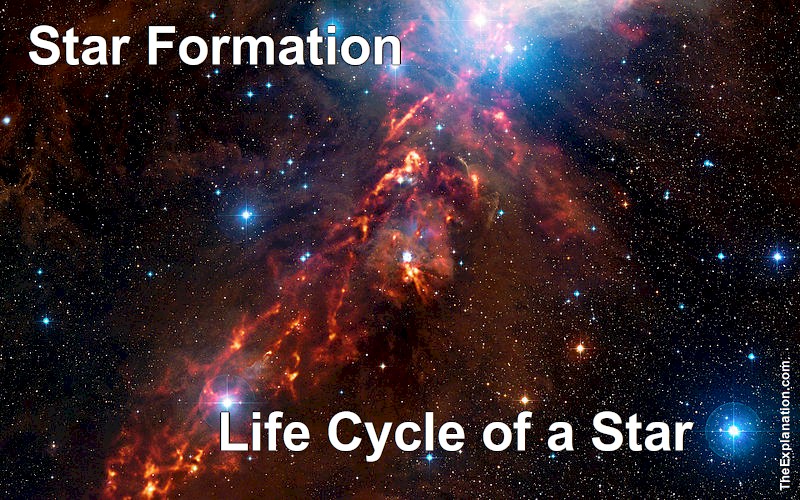 Star formation is a dynamic process more awe-inspiring than any Hollywood celebrity. Star formation, hydrogen burns and creates helium. The beginning of the Life Cycle of a Star.

Speaking of celebs, our first stars are the Sir Laurence Oliviers of the universe, but they are as volatile as Hugh Laurie’s curmudgeonly physician, Dr. House. Star formation is the beginning of the life cycle of a star.
(Inventory of the Universe, chapter 2.4-5)

Once the principal roles are cast, the production is carefully scripted and we turn our camera to the birth of a star taking place one billion years after the Big Bang.

Remember that, in element decay, existing elements combine into new ones like an atomic makeover. Helium develops in this way and expands our new star formation into a red giant with a core of hydrogen and an envelope of helium. Our starlet is the original breakout star—a huge star.

When that core of burning hydrogen is consumed, all the outer helium collapses to the center and the violent death implosion phase of the star’s life begins. These are the original “special effects” of the universe. Imagine a ball thrown high in the air. There’s the upward thrust, then it gradually slows down.

For a split second, the ball is motionless before beginning its descent (inward, in the case of stars). Now imagine billions of weighty balls doing this from thousands of meters in the sky, plunging from all directions. The crushing impact fuses the helium together and, in this collision, many new chemical elements are born.

With Galacti you have a front seat as you watch the elements come into being: beryllium, carbon, silicon, sodium, oxygen, and magnesium, gold, silver, and iron, the heaviest.

There is a map of heavy metals, a map of future combinations such as carbon dioxide, gold, and silver combining to make the universe’s first wedding ring. There’s no combo with iron, however, since iron is a heavyweight.

Lithium is busy making new connections, since all the lithium (or Lithium-7 to be more precise) in the universe appears within the first 300,000 years after the Big Bang. Lithium-7 is a key ingredient in nuclear reactor coolants in the present, but no one is thinking of nuclear reactors right now because the original universal reactor is still at work.

Under the pressure of gravity, the mating dance of helium atoms cannot be ignored. They “want” to form bonds and are transformed into a fiery molten mass: a soup of heavy metals.

This helium fusion drives atomic energy to astronomic heights and climaxes with the thermonuclear explosive force in the core overtaking gravity’s compression. In an instant, Galacti dances on the waves as the supernova blast spews the newly formed life-giving elements into space.

They are free to bond in a cosmic celebration. As for star formation, the supernova,  it dies out and eventually collapses into a black hole or neutron star. Galacti can show us the first red giant stars in our imagination, since we do not have pictures or videos.

He can witness them in all their massive glory, each mass transforming into a volatile supernova like a heavy metal band destroying the stage.

Without these explosions—without the heavy elements—our Earth would not exist.

Earth in the Making—It’s All about Location

First, however, we add gravity. Gravity pulls together those red-hot (but cooling) heavy elements spewed out from the supernova explosion.

Formation of the stars. From dust to stable star with the help of gravity and then on to heavy metals and Supernova … such is the life of a star.

These heavy metal bands are more massive elements, and are in the Rock and Roll Hall of Fame as the first twenty-four elements in the periodic table. They have more mass than hydrogen and helium—the original inductees—which means they have more gravity to pull the stardust together as the universe cools.

Our galaxy, the Milky Way, with its 100 billion stars, including our solar system with its eight planets, three dwarf planets plus 146 known moons around the eight planets, was formed between 10 and 13.6 billion years ago.

We can thank beryllium for revealing the secret of the Milky Way’s age, since scientists who study beryllium today use the element to determine the galaxy’s date of birth. When Galacti talks about our sun’s age, he puts the spotlight on uranium. Scientists have used uranium to establish our sun’s age at 4.6 billion years.

The sun seems like a baby—young and small in this vast old galaxy. Our eight planets surround the baby Sun like one giant interplanetary crib mobile.

Earth is just a speck in the Sun’s “eye” in this stunning display of celestial bodies. But over millions of years, that invisible speck of a speck has become a very hospitable place compared to its neighbors. Galacti has donned the humorous guise of a universal real estate agent as he surveys the other planets. I play the role of the client.

You’d have to buy a hazmat suit. In addition, you’d eventually end up gaining weight because of the gravity—it’s ten times that of Earth.

Mars is in a great location for commuters, but they make a lot of iron oxide in the planetary factory there.

On Earth, we use it to glaze pots, weld girders, and give power to military incendiary bombs. That’s a little frightening. You’re also living in a wind tunnel if you are living on Mars, so the dust gets in your lungs and creates electrostatic charges that will fry your computer.

Venus? It sounds romantic, but it’s hot enough to turn a fried egg to vapor and the air is poisonous.

No. You want to live on Earth. It’s a brand-new community currently in development, and right now you can be the first to move in.”

“It doesn’t have any of the dozens of catastrophic conditions in those other bad neighborhoods?” I ask.

“No. Earth has none of them,” Galacti says. “You’ve heard of curb appeal. Earth has atmosphere appeal.”

“All right. As a bonus, let me show you the Earth’s atmosphere. You are just going to love it.”

“Sorry. I threw myself a little too much into the part. Let’s rather turn over this next set of puzzle pieces and get a clearer picture of this physical cocoon we’re immersed in and without which we could not live. Let’s get into some of the facts about Earth’s atmosphere that affect us on a day-to-day basis.”

Since you read all the way to here… you liked it. Please use the Social Network links just below to share this information from The Explanation, Incredible Star Formation. 1,000,000,000s, How Possible?