Genesis 1 – Science with Big Bang and the Bible with Creation, in Accord? 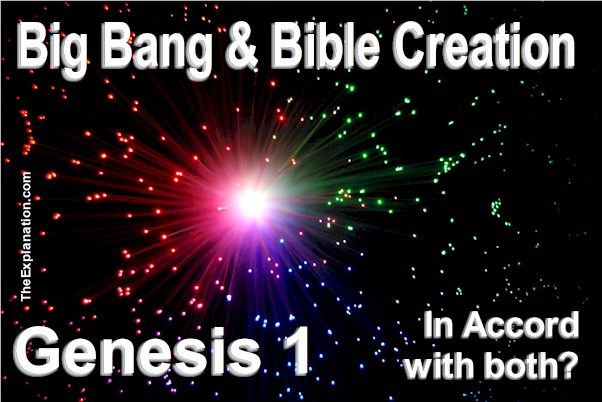 Genesis 1. Here’s the question: Is Big Bang Biblical? Does the Bible say anything about this creative event? Is the Bible account in agreement with scientific discoveries?

Genesis 1 refers to Bible Creation. Science Big Bang relates to Creation. are these two sources in accord? Do the Bible and Science agree about the origin of the universe?

We know Genesis 1 talks about the creation of the Universe. What most people don’t realize is that there are many other corroborative contexts elsewhere in the Bible for Genesis creation.
(Origin of the Universe, chapter 6.2)

We saw in Psalms 8.3 that God had ordained the moon and the stars from the work of His fingers. Strong’s concordance also translates ordained (H3559) with fashioned, and Job 31.15 reveals that this fashioning can take place over some time.

If you’ve come across this blog post for the first time, then please know that it is part of a more extensive work. To see the entire context, which you can read online, click here.
You can follow along by using the online Bible, the Interlinear Bible, Strong’s Concordance and the Hebrew/Greek Concordance at UnlockBibleMeaning.com
To understand how I’m using Biblical Hebrew, read this short presentation of 7 keys to Master Biblical Hebrew
To fully understand Big Bang and Genesis Creation please read this mini-series of blog posts starting at the beginning.
Dig for Bible Study gems to enhance your understanding: See ‘Further Study’ suggestions at the end of this blog post.

It’s already amazing that we have records—like Genesis 1— of pre-human, impossible to know events. Of course, this could be glib gibberish of someone’s fertile imagination, maybe even a drug-crazed mind. After all, fiction of the most extreme and weird genre is pretty standard nowadays.

We move on to the second of three KJV translations for the Biblical Hebrew word kuwn (ordained in Psa 8.3) in Joshua that throws light on Genesis 1 Creation:

And the priests that bare the ark of the covenant of the LORD stood firm (H3559 – kuwn) on dry ground in the midst of Jordan, and all the Israelites passed over on dry ground, until all the people were passed clean over Jordan.

This verse relates how the Israelites cross the river Jordan into the promised land after 40 years of wandering in the desert. At the climax of this episode, God held up the waters of the Jordan River (remember, fairytale if you want, but according to the Bible this is an encore of the splitting of the Red Sea event after the Exodus), flowing down from the north, so the Israelites could cross westward into the land where they were to live.

Dramatizing this event onstage, we would see the priests, going first, carrying the ark, stopping and standing firm in the middle of this dry riverbed formerly flooded with water, while all the Israelites crossed over. They didn’t sink into any muddy ground or slip around in puddles of water.

The parallel with the coming into existence of the universe in Genesis 1 is that for billions of years, the swirling flowing balls of gas in the heavens were and are not firm. But some ordained astral bodies are firm and established, with our earth as the prime example. Unlike many bodies, like Jupiter, which is gaseous, Earth has a solid, dry surface on which human beings can not only stand but walk and work normally. Unlike even our moon, where you float on the ground rather than adhere firmly to the surface. On Mars, a 150 pound  (68 kg) person would weigh 57 lbs (26 kg.); see the video; you’ll bounce around on that planet.

Unlike many bodies, like Jupiter, which is gaseous, Earth has a solid, dry surface on which human beings can not only stand but walk and work normally; this is unlike Mars where you'll bounce around because of lesser gravity. Click To Tweet

Concerning Earth, kuwn and one of its translations ‘firm’ is certainly an apt description. According to the Bible–as an aspect of Genesis 1–when it says God ordained, that includes ‘fashioning something firm.’ No problem walking firmly on Earth. We read about the third clue in 1 Chronicles.

This verse in context is alluding to spiritual stability—but this descriptive word is also applicable to physical stability. (read this post about how Biblical Hebrew uses both literal and figurative) As we can verify from research, many, if not most of the stars and planets around us are in an unstable state. For a planet to support any life, stability and sturdiness must be secured; this is the exact condition of our planet today.

You can’t build on quicksand. We discussed the stability on Earth’s land surface in Inventory of the Universe chapter 4. The earth’s crust beneath the oceans is on an average 5 to 10 kilometers thick while under the continents; it’s from 30 to 50 km thick. This crust floats on a molten viscous but relatively rigid mantle that extends downwards about 2900 km to the earth’s core. It’s comparable to the thickness of the skin on a good-sized peach. Not very much, and some in our audience point out the earth’s crust is in a state of change, but that peach-fuzz-skin thickness is enough to give the stability and firmness essential for construction and other human enterprises.

From the one Biblical Hebrew word ‘kuwn’ (3559) with the translations and meanings ordained, fashion, firm and stable we see there is no contradiction from a scientific and biblical point of view for questioning the concept of the formation of astral bodies over a certain period (fashion). And the fact that at least Earth has a firm surface and stable temperature and atmosphere as I also pointed out in Inventory of the Universe.

One Biblical Hebrew word ‘kuwn’ (Strong's H3559) meaning: ordained, fashion, firm and stable points to the formation of astral bodies over time (fashion), and at least Earth has a firm surface and stable temperature and atmosphere. Click To Tweet

There are still questions; we are far from understanding everything. We certainly do not. But, first of all, we can begin to see that the Bible refers to the coming into existence of the heavens and Earth in other places than just in Genesis 1. We shall see numerous other such references.

We are also just beginning to see that the Biblical Hebrew is revealing, through exact descriptive vocabulary, aspects of this coming into existence, this Genesis, we hadn’t seen before. These aspects and science are much closer than many would have us believe.

We also see from this first example of the use of Strong’s Concordance and the King James translation how the same Biblical Hebrew word has complementary meanings. You’re beginning to understand that Hebrew words—like in other languages—have various and numerous nuances. King James’ translators understood this; hence, the approximate twenty-five different translations for the root kuwn (H3559), which appears about 215 times in the Old Testament.

Think about that, only 215 appearance for ONE word, yet the translators used TWENTY-FIVE variant words to render ‘kuwn.’ Are you beginning to see why this is so interesting and instructive?

ONE Biblical Hebrew word, 'kuwn' - 'ordained' is used 215 times in the OT, yet the KJV translators used TWENTY-FIVE variant words to render it. This realization helps us understand the complexity and complementarity of the vocabulary. Click To Tweet

I want to add another point here as a reminder of what I wrote in the chapters about Biblical Hebrew, the King James translation, and Strong’s Concordance. The original Hebrew writing goes back 3.500 years, (some put it much later, and I don’t want to quibble about it here, but even if it is later the following principle applies) the translation goes back to 1611 some 400 years ago, and Strong published his work in 1890.

The Hebrew and its KJV translation precede what’s known as ‘Bible criticism’—or the concept of academic rationalization treating the Bible as a ‘piece of literature.’ Strong’s work is simply a cross-reference of all words in the KJV back to the original word in Hebrew. Today, a well-programmed computer program could pretty well put together this concordance.

I’m using three accepted and acknowledged outside sources—that are recognized to have tried to stay as faithful as possible to the original intent of the Bible—to write the rest of The Explanation series–a word-by-word commentary on Genesis 1 and elsewhere. All I’m doing is pointing out the correspondence between the Biblical Hebrew, the KJV translation, and the original roots. I’m not translating anything, and I’m not using any extraneous commentaries to give meanings to words or phrases.

That’s why I’ve entitled this The Explanation series WITH Sam Kneller and not BY Sam Kneller. I do not consider this MY Explanation. All of this material—like Genesis 1—includes its OWN Explanation. I’m just turning over the pieces, putting them together (you may consider otherwise—which is fine—but at least read until the end and give it an honest chance) to present you with the complete puzzle picture. All these pieces together represent coherent completeness. My role stops there.

The Bible and an Expanding Universe

Let’s look at different passages, corroborating Genesis 1, and their meanings through the space telescope lens magnification of our inquiry about the expanding universe. Does the Bible censure or confirm the hypothesis of an expanding universe? Does it even address such a question?

“But you’re not going to cherry-pick Bible passages, are you?” shouts out either a scientist or a religious figure in the audience.

“I’m not going to proof-text, present an idea, and then pull verses out of a hat and say ‘Aha, told you so,'” I answer. “We want to know what the Bible as a whole says, and whether it dovetails with what true science is revealing. For instance, via the Sloan Digital Sky Survey, which is creating the largest ever 3-dimensional maps of galaxies, quasars, stars, etc. in short, the structure of the cosmos. Now, back to Genesis 1.”

Genesis 1 is the best-known chapter referring to creation; however, there are numerous other Bible context puzzle pieces alluding to this intriguing subject. We shall investigate many of them and pull them together to gather insightful data. Only when we’ve examined all contexts relevant to a topic can we say; this is the real shape of our jigsaw piece.

Next week we’ll look at a very enigmatic verse that is incomprehensible in English, and I dare say in most if not all other translations. It’s Job 26:13; I’ll explain why we’re looking at this verse. In the meantime, check Further Study below.

This blog post is an excerpt from chapter 6.2 of the book Origin of the Universe

Since you read all the way to here… you liked it. Please use the Social Network links just below to share this information from The Explanation, Genesis 1 – Science with Big Bang and the Bible with Creation, in Accord?