The Illusion of Artificial Intelligence and Transhumanism 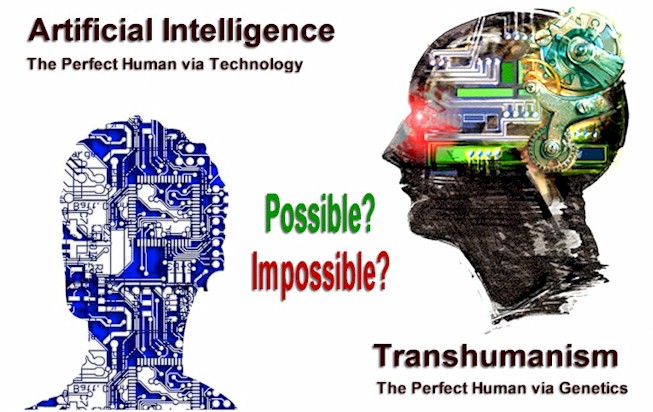 Artificial Intelligence and transhumanism are the buzzwords now promising a brighter future. Intelligence in machines and genetics that exhibits behavior and reactions like super-humans.

Artificial Intelligence – Transhumanism – The perfect human via technology and genetics. Is this possible or impossible?

Artificial intelligence is the equivalent of creating the mind of a human. That’s what science has to accomplish. Then we’ve got to associate that artificial mind with a perfected human body. That improved human body is being developed as I write this blog. This practice is known as Transhumanism.
(Audit of the Universe, chapter 9.5)

Transhumanism can be defined as a way of thinking that advocates the use of science and technology to improve the physical and mental characteristics of humans. This way of thinking is based on the belief that humans are currently in the middle phase of development. Indeed, the “transhuman” corresponds to a state that is located between the human and the “post-human”. The post-human would have basic abilities far beyond those of today’s humans and therefore would not be considered a human according to our current standards.

For example, this post-human would be resistant to illness, have eternal youth, control over desires, moods, and mental states. This post-human would be able to not feel fatigue, hatred or stress as well as having a great capacity for feelings of pleasure, love, appreciation of art and serenity. In fact, s/he could experience new states of consciousness that the current human brain can not reach.

Science and technology, in all their splendor and forms, are devoting much effort to create ‘wonder-humans.’ Let me break it down for you in understandable terms.

In the last blog post, we discussed the body-mind dilemma: What’s the body? What’s the mind? and especially how the two interact. We understand that these questions are 400 years old and in 2018 there is NON CONSENSUS on the nature of ‘mind’ and especially how it ‘works with the body.’ Interaction is a total enigma. Transhumanism and Artificial Intelligence are just the modern version, with hyped-up vocabulary, of this age-old dilemma.

We are being made to believe that not only has the body-mind issue been solved BUT that science and technology can build a superior body-mind human. What do you think about that?

We are being made to believe that not only has the body-mind issue been solved BUT that science and technology can build a superior body-mind human. What do you think of that? Click To Tweet

I’m certainly not an expert on either artificial intelligence or transhumanism. So I’m passing it over to John Horgan via quotes from his book ‘Undiscovered Mind.’ He’s interviewed many of the fathers and experts in these fields. Here are some choice pieces of what he has to say (page numbers are in brackets):

“A common problem in describing human mental life, the theory of mind, is the notion that the mind is divided into modules dedicated to specific tasks. These assumptions are limited, but it still leaves unanswered the question of how the results of all these modular computations become integrated (page 197).

Common sense is egregiously what the computers that we know how to build don’t have.” Horgan concludes: “Evolutionary psychology and Artificial Intelligence are both bumping up against the Humpty Dumpty dilemma. They can break the mind into pieces, but they have no idea how to put it back together again (198).

Not even the most avid artificial intelligence enthusiast claims that these programs
represent a serious challenge to human composers, artists, and poets (205).

In 1997 the computer Deep Blue defeated Gary Kasparov… examining 200 million chess positions per second. Deep Blue succeeds NOT by trying to mimic human judgment but by reducing the problem to pure computation … The techniques that tried to mimic human judgment failed miserably. Joseph Hoane (principal software engineer for the Deep Blue project) concurred. ‘We still don’t know how to do that at all.’ (207).

Thinking is a very difficult word. The brain is more than hardware. It’s all the software and everything else. (208). A network can be ‘trained’ to recognize patterns with greater accuracy. Neural networks acquire knowledge. But, in practice, neural networks have turned out to be as limited and inflexible as rule-based methods. Horgan doubts the rule-based network will lead to truly intelligent machines (209).

Human intelligence has the capacity for rapidly processing and acting on ambiguous, open-ended data, to draw on a vast reservoir of worldly knowledge that might be called common sense (211). Neural networks have the same problem as Artificial Intelligence: an inability to duplicate common sense. There’s been no progress in understanding the mind (213)

In domains such as language understanding and common sense, which are basically limitless in their possibilities and hard to specify, we fall far short. AI so far has been a failure (214). The goal of building truly intelligent machines had not been achieved (219).

Neural networks are trying to understand biological systems… we’re overlooking some vital component (222). We’ve failed to do justice to the mind’s complexity. Mind-scientists and philosophers cannot even agree on what CONSCIOUSNESS is let alone how it should be explained (224).

Quite an indictment of artificial intelligence and transhumanism. Don’t get me wrong. We are making and will make great strides in genetics and perfecting machines and trying to get them to act more and more like human beings. Indeed there are ‘nurse’, ‘receptionist’ and ‘baby-sitting’ machine-robots. Progress will be made, but they will be programmed machines unendowed with the capacity of the human mind.

Because we don’t understand the key place and role the mind plays in human beings we go awry in putting great belief in the capacities of science and medicine to produce super-humans.

Because we don’t understand the key place and role the mind plays in human beings we go awry in putting great belief in the capacities of science and medicine to produce super-humans. Click To Tweet

Let me be very clear. You’ll need to be understanding of the overall concept I’m going to develop here.

Historically, until the end of the 1800’s the religious concept that the mind was a non-physical entity, dualism (body+mind=2) reigned. From the 20th century onward the monistic (body+mind=1) viewpoint has gradually but steadily made headway to where nowadays it is practically presented as FACT that the mind is an integral, inseparable part of the brain.

As a result of that, we have reduced everything to ‘treatment of the brain.’ This is the whole quest of genetics–find the ‘genetics’ of everything, manipulate the genes that control alcohol, sex, anger–and boom–we’ll have better humanity. That is the ultimate goal of  Transhumanism. The belief or theory that the human race can evolve beyond its current physical and mental limitations, especially by means of science.

Artificial Intelligence is working from the other end of the spectrum. They have already concluded that ‘human is physical’ (the mind is physical), so they can build a PHYSICAL MACHINE that will be HUMAN.

All of this is based on ONE concept alone: the MIND is PHYSICAL.

IF the mind is NON-physical then both Transhumanism and Artificial Intelligence are bunk and the proponents of these concepts are barking up the wrong tree.

IF the mind is NON-physical then both Transhumanism and Artificial Intelligence are bunk and the proponents of these concepts are barking up the wrong tree. Click To Tweet

In the final four sections of Audit of Humankind, I will show why this vagrant vision of the future of humanity is not viable. In the next book Origin of Humankind (which can be read online) I will show you an acceptable alternative to Transhumanism and Artificial Intelligence.

Please retain the key from this chapter, it’s up to you to decide: Whether the MIND is a PHYSICAL integral part of the BRAIN and GENETICS or whether it is a NON-PHYSICAL entity that totally escapes the body and is an entity of and by itself that has to be treated as such.

This blog post is an excerpt from chapter 9.5 of the book Audit of the Universe.

Since you read all the way to here… you liked it. Please use the Social Network links just below to share this information from The Explanation, The Illusion of Artificial Intelligence and Transhumanism