The Mind-Body Dilemma, 400 Years Old and Still Unsolved. Why? 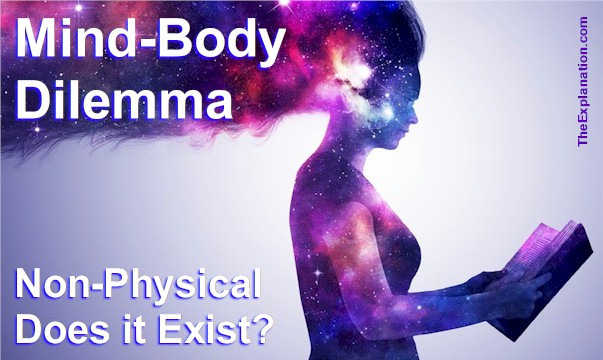 The Mind-Body issue is fundamental to what humans are. We know we have a body and mental capacities. But what is the relationship between the two? Mystery.

The key to understanding the Explanation is the human mind. Let me say it clearly, if you don’t understand what the mind is and especially WHY each human being has a mind, you’ll never get to first base.

The key to understanding the Explanation is the human mind. Let me say it clearly, if you don't understand what the mind is and especially WHY each human being has a mind, you'll never get to first base. Click To Tweet

I will also state at the end of this chapter what the mind is. At this point in Audit of Humankind, I will not give you the reasons for my affirmations. Not because I don’t want to but because it’s too early. First the foundation. You’re going to have to be patient until my next book Origin of the Universe reaches this Explanation. However, you will clearly see, and I will point it out regularly in the next 5 sections of Audit that without a ‘mind’ those chapters would not exist. The human mind, and ONLY the human mind makes possible:

The human mind is the basis of ALL the above. Without the mind, the cognitive, we’re just like upright standing apes and baboons. It behooves us to know what the ‘mind’ is. Furthermore, it would be helpful to know WHY we have a mind. Why each and every human being that has ever walked the face of this Earth has had a mind. Whether we agree on what the mind is we all have to admit that the mind is the ‘center of interest’ of humankind.

So, let me say that humanity is in total confusion as to what the mind is.

As with the body you’re going to hear a lot of conflicting information about the mind, in fact it’s the same dilemma—are the mind-body one and the same? In other words, are they both ‘physical’–one unit, in two electro-chemical parts? Whole university programmes are devoted to studying Computation Cognitive Neuroscience.

Understanding the relationship between brain, cognition and behaviour is one of the biggest challenges the scientific community is currently working on. Computational cognitive neuroscience is a young and exciting discipline that tackles these long-standing research questions by integrating computer modelling with experimental research.

Notice what’s specifically being said here: “brain mechanisms and structures underlying cognition and behaviour.” Let’s be clear. this states that the ORIGIN of cognition (‘the mental action or process of acquiring knowledge and understanding through thought, experience, and the senses’) and behavior is brain mechanisms and structures. The brain is the originator of the mind that leads to behavior.

I have thrown you into the middle of one of the hottest debates that has been going on since the 17th century when Rene Descartes first pointed out the problem:

Mind–body dualism, or mind–body duality, is a view in the philosophy of mind that mental phenomena are, in some respects, non-physical, or that the mind-body are distinct and separable. Thus, it encompasses a set of views about the relationship between mind and matter, and between subject and object, and is contrasted with other positions, such as physicalism and enactivism, in the mind–body problem.

Today we call this the ‘body-mind dilemma.’ There are shelves of books and material on this subject and absolutely NO consensus whatsoever either in the world of scientists or philosophers. What I’m saying is this: The greatest intellectual minds for the last 400 years have not reached a definitive conclusion as to what the ‘mind’–the mental, the human thinking process—really is.

There are shelves of books on the 'body-mind dilemma' and NO consensus either in the world of scientists or philosophers. The greatest intellectual minds for the last 400 years have not concluded as to what the 'mind' really is. Click To Tweet

400 years, yet, did you notice the presentation of the university program above, ‘Computational cognitive neuroscience is a young and exciting discipline.’ In essence, this is a new twist on an age-old conundrum. And, some would say I’m being repetitive, even paranoid, I’ll just say for clarity’s sake, here’s a definition of neuroscience:

Neuroscience (or neurobiology) is the scientific study of the nervous system. It is a multidisciplinary branch of biology, that deals with the anatomy, biochemistry, molecular biology, and physiology of neurons and neural circuits.

Click on the link in that definition and read a little further. Do a little research yourself into what ‘neuroscience’ and ‘cognitive neuroscience’ are. In my opinion, they are lopsided studies that depart from the ‘truth‘ that the ‘mind’ is an integral part of the ‘body.’ Mind-body are one and the same… so they say.

Yet, this controversy has not been definitively solved. And therein lies a serious quandary.

Ask yourself a simple question: How can you treat or cure someone who is sick if you don’t even know what the base of the illness is? How can you deal with mental sickness if you don’t even know what the mind is? I’m not saying you can’t help in such a situation. Many people have and are devoting their lives to do their utmost, and I salute them. All I’m doing is exposing the fundamentals of what many are taking for granted.

In this blog post, I want to help you understand one thing very clearly: the body-mind dilemma.

John Horgan is both an erudite and thorough journalist on the topic of Science. In my opinion, he has written some of the most unbiased material presenting both sides of this admittedly hard-to-understand problem. Here’s an excerpt from an article he wrote regarding the body-mind issue:

How does matter make mind? More specifically, how does a physical object generate subjective experiences like those you are immersed in as you read this sentence? How does stuff become conscious? This is called the mind-body problem, or, by philosopher David Chalmers, the “hard problem.”

I expressed doubt that the hard problem can be solved—a position called mysterianism–in The End of Science. I argue in a new edition that my pessimism has been justified by the recent popularity of panpsychism. This ancient doctrine holds that consciousness is a property not just of brains but of all matter, like my table and coffee mug.

Panpsychism strikes me as self-evidently foolish, but non-foolish people—notably Chalmers and neuroscientist Christof Koch—are taking it seriously. How can that be? What’s compelling their interest? Have I dismissed panpsychism too hastily?

Can you see the controversy here?

Neuroscience and Cognition take on all sorts of ideas and ‘names.’ Below it’s called ‘Integrated information Theory. And here’s what Physicist Marcelo Gleiser, interviewed by John Horgan, has to say about that.

Horgan: Are you a fan of the new theory of consciousness, integrated information theory?

Gleiser: I think a “fan” would be too strong a word, but I applaud Tononi and collaborators for trying to come up with a quantitative way of making sense of consciousness. Of course, the essential premise of IIT is that consciousness is fundamental, sort of like as fundamental as space and time (assuming these two are fundamental, another story altogether). I find it hard to understand what that even means, as it focuses on ontology, what is real and what is not.

I am more of a science-as-a-descriptive-tool kind of person, and see consciousness in a more pragmatic and less fundamental way, as an emergent property of very complex neuronal patterns. Of course, I could be wrong and we may indeed need a very new perspective on the nature of consciousness. Even so, I don’t think making it just a mathematical theory will be enough.

As with the origin of the universe, the nature of human consciousness may be the kind of question that we may not be well-equipped to answer fully through a scientific approach, even if we are able to artificially create some kind of limited consciousness through AI. This doesn’t mean that consciousness has anything to do with supernaturalism; it simply means that some questions are not well-posed for our current scientific framework.

Again, just notice the ambiguity in this reply. Gleiser sees consciousness emerging from ‘complex neuronal patterns.’ In other words, body and mind are one. He goes on to say that science may not be equipped to offer an answer to this problem and then, although he brings up supernaturalism (the non-physical), he brushes that aside by saying we’re not asking the right questions. Amazing pirouette. the mind-body issue is a conundrum.

Here’s a link to Tim Crane and Sarah Patterson’s work: History of the Mind-Body Problem. On page 169 they point out what I’m stating in this blog post: ‘…leaves contemporary philosophers with their problem: mental causation inclines them towards physicalism, while consciousness inclines them towards dualism.’ I realize there’s difficult vocabulary here. It is saying that the ‘mental’ is caused by physical (only) whereas conscience is dual, that is, contains both physical and non-physical phenomena.

If you read some of their work and any other works on the subject of mind-body you will see two camps.

Since the scientific world cannot use words like ‘spiritual’ or even ‘supernatualism’ (which Gleiser used above–just to deny it.), hence the creation of erudite terms like:  ‘raw feels’, ‘sensa’, ‘phenomenal qualities’, ‘intrinsic properties of conscious experiences’, the ‘qualitative content of mental states’ and of course ‘qualia’. A general, more understandable term used here is ‘non-physical.’ I shall define this (non-physical) in more detail.

The mind-body dilemma: One camp believes that everything mindful is PHYSICAL--the body. This is monism--ONE source. The other camp leans towards dualism--TWO sources. Firstly the body, secondly something 'outside' the body. Click To Tweet

On a lighter concluding note, last night I watched a TV documentary about the saga of Tupperware. Quite a story. At one point the commentator said, ‘In the USA there was a shortage of raw materials and only the human mind could come up with synthesizing a product to replace the natural. In this case, using the residue of petroleum to create malleable plastic. It’s the story of Earl Tupper. I leave you with the thought: Is it the physical human brain and neural networks that can imagine, synthesize, and create?

The investigation will be continued.

This blog post is an excerpt from chapter 9.4 of the book Audit of the Universe.

Since you read all the way to here… you liked it. Please use the Social Network links just below to share this information from The Explanation, The Mind-Body Dilemma, 400 Years Old and Still Unsolved. Why?