The Universe … an Infinite Number of Puzzle Pieces … Assembled Perfectly 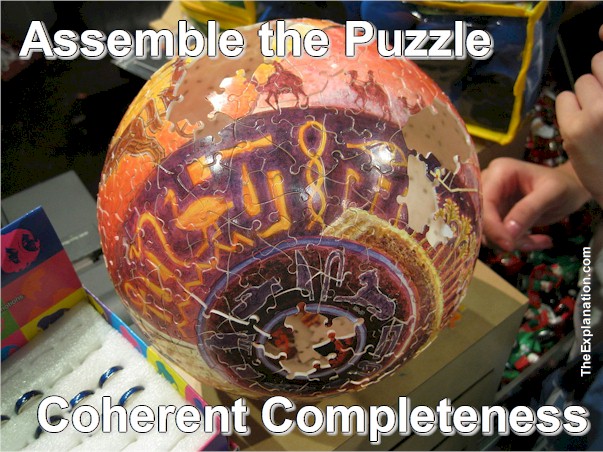 The Universe is the most amazing puzzle. A puzzle assembled perfectly from point particles to humankind’s mind. Inventory of the Universe has painted the broad picture for you. The Universe is the most amazing puzzle. A puzzle assembled perfectly from point particles to humankind’s mind. Inventory of the Universe has painted the broad picture for you.

We’ve turned over the inanimate and animate pieces of the puzzle, witnessing the origin of our universe and going down through the atmosphere to the water and land on planet Earth. We’ve seen plant and animal life, and we’ve also delved into the ingredients of life themselves.
(chapter 10.12) Epilogue

We then focused on the human body, brain, and mind, pointing out that a human is a unique creature that has a vast number of traits that differentiate them from animals. We learned that this gives him huge potential far and above what any animal could ever accomplish.

This potential is essentially in the cognitive field and includes thoughts, imagination, creativity, analysis, and planning. We also pointed out that the area where this takes place is called the mind. So far, science has not been able to put its finger on the mind. It remains a mystery, but we understand that it is the key to the uniqueness of humankind.

This book, Inventory, has opened our eyes to various aspects of our day-to-day environment that we have a tendency to take for granted and not pay much attention to.

My hope is not only that we experience a renewed respect for the “wonder” of it, but also that we see it as a whole. All the processes of each aspect of our environment fit together.

For the #Universe, we experience a renewed respect for the “wonder” of it, but also, see it as a whole Click To Tweet

For examples, see the nitrogen cycle, the water cycle, and butterflies, wasps, and bees pollinating flowers and plants. These processes impact, intermingle, and create an interface so that other processes can express themselves. We live in a fully integrated, interdependent environment with no missing or redundant parts.

We live in a fully integrated, interdependent Universe and #environment with no missing or redundant parts Click To Tweet

We have opened the doors to reveal a bird’s-eye view of our surroundings, as well as some of their attributes and functions. The goal is to imbibe a general and global idea of what we’re working with, in our quest to understand if and how it is possible to establish peace and prosperity here on Earth.

We have turned all the pieces of our puzzle right side up. We’ve identified each of the major pieces, and we grasp how complex each one is and how elaborate the edges are.

We see that the puzzle is one masterpiece, which is in turn composed of multiple interwoven, smaller masterpieces. The sun’s heat relates to wind, which relates to the rain and currents of the Gulf Stream as air is pushed to rise over a mountain, dropping rain on agricultural fields, replenishing the groundwater with some runoff into the ocean—and water continues its cycle.

The puzzle of the Universe is one #masterpiece, which is in turn composed of multiple interwoven, smaller masterpieces Click To Tweet

We can put it together and see it in our mind’s eye, but frankly, it is beyond any of us to comprehend the complexity. We cannot fully grasp this incredibly well oiled, purring machine we call the universe.

We know that humankind has managed to scrutinize and influence the equilibrium of this perfect puzzle as of the beginning of the last century. Humans have tended to forget that these separate pieces really fit together.

It’s like asking six blind people to describe an elephant: the first touches the trunk and thinks it’s a snake, the second runs his hand down the pointed tusk and takes it for a curved spear, the third is wrapped up in the large ear and declares it to be the leaf of a palm tree, the fourth stretches his hands out along the immense back and says it’s a house, the fifth wraps his arms around a leg, thinking it must be a tree, and the last man grabs the tail and shouts that it’s a heavy rope. They are all wrong because they have only parts of the story.

To get it right, you have to take the sum of all the parts and see how they fit together. You have to see the big picture. That’s what putting the puzzle together is all about. This book has set out all those parts. Our quest is to look at the puzzle as a whole and see where and how all the pieces fit together.

The next book does an Audit of the Universe of the pieces we’ve turned over. How are we progressing? What state are the pieces in? Humans have been playing with the puzzle. They’ve been taking it apart and looking at pieces individually, nationalistically, and continentally. They’ve been shaving off the edges or adding bits and pieces to each puzzle piece to suit themselves.

Audit of the Universe also takes a closer look at how the human mind functions. At the center of the puzzle, so to speak, we’ll zoom in on how mankind has exercised its mind to generate successful approaches and practices dedicated to bringing peace and prosperity on an individual, national and global level.

We’ll witness his successes and failures and examine where we stand at the beginning of the twenty-first century. When seven billion people are playing with the same puzzle according to their own different rules, can it resemble the original one for long? Can its masterpieces retain their perfect fit, each filling its position, functions, and responsibilities properly within the entirety of that intricate puzzle? Just what shape is our puzzle in? Is it still recognizable?

How much sincere interest is there in trying to understand the original shape? Is there a limit to how far humans can go in breaking off the edges of the puzzle pieces before the puzzle falls apart? What is the state of our universal heritage? Do we have peace and prosperity? Is it attainable for all? If so, how?

This post is the Epilogue of Inventory of the Universe.

A short time-lapse video to show a puzzle being assembled. There are many lessons to be learned as to the process that takes place. One piece at a time … even if there’s a lot of trial and error … to find the ‘one and only’ piece for each particular position.

Since you read all the way to here… you liked it. Please use the Social Network links just below to share this information from The Explanation, The Universe … an Infinite Number of Puzzle Pieces … Assembled Perfectly