Mankind’s Mind, the key to Awesome Ideas for Clearer Thought 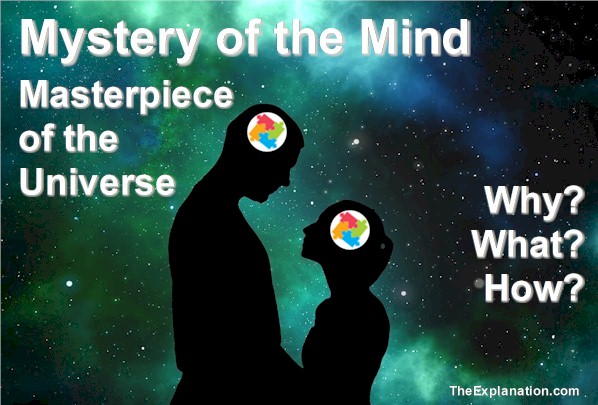 Mankind’s mind is the gulf that separates man from animals. His cognitive capacities don’t give him an edge; they are universes apart in their accomplishments.

Mystery of Mankind’s Mind, Masterpiece of the entire Universe: Why does it exist? What’s its purpose? How does it work?

Mankind’s mind is the focus of this section of Inventory of the Universe. We started with Big Bang and point particles, we have surveyed the entire Universe and come down to the fundamental factor of what makes and breaks life of earth.
(chapter 10.11)

Galacti indicates that, if we are going to give The Explanation, we are entitled to ask such fundamental questions, even though answers are not forthcoming at this point and even if we can’t imagine how it is possible to answer such questions.

However, there are a lot of unimaginable things that we’ve discussed and found to be reality, as we’ve seen. This difference between animals and man is definitely one of them.

Animals and man both have bodies, brains, and capacities. Animals’ bodies are more specialized and better equipped to handle their environment than those of man, especially as that environment becomes more and more extreme in altitude and temperature.

On the other hand, as Galacti points out, man’s brain is far superior to that of any animal, and this definitely gives man the edge in being able to control his environment.

Man’s mind is far superior to that of any animal, and this gives man the ability to control his environment Click To Tweet

Mankind’s mind allows him to discover, analyze, synthesize, and conceive solutions, to the point that he can control his environs to a certain extent. In summary, man doesn’t have to submit to his environment; he can subdue and tame it to suit his needs instead.

As we saw in chapter 9, mankind’s mind is a marvelous machine that can fantasize, imagine, and visualize the most astonishing and implausible scenarios.

In fact, mankind’s mind itself stands out as the highlight of man’s achievements: the key component, the essential constituent that sets man apart, not only from animals, but also from the rest of the inanimate and animate world.

Mankind's mind itself stands out as the highlight, the key component that sets man apart, from animals Click To Tweet

It sets man apart so much that he is above them and is able to control them using his mind. He is able to extract coal and minerals from the earth, shape wood into furniture, and produce works of art like the koa wood bowl from Hawaii that Galacti shows us (the koa tree is indigenous to Hawaii), tame horses, raise cattle, use utensils for cooking and eating.

Mankind’s mind allows him to divert water by building a dam, produce pulses of laser light, craft silicon into computer chips, create the paper or e-reader on which you are following our journey, make rubber into tires, turn the breath of his lungs into music by playing an instrument, use his mind to diagnose and treat the sick as we saw in chapter 8, and share his knowledge by teaching others on a field trip.

Animals care for the members of their flock, pride, or colony, but not for intruder animals. We see a dog and an African cat becoming friends, but only because they were raised together and are familiar with each other.

By contrast, people from our tour have voluntarily and consciously formed friendships with others who are from completely different backgrounds.

We even see a nurse who has a background in working with animals help one of the Adelie penguins. Fantastical?

However, mankind’s mind can conceive of helping creatures that will never understand what motivates him to do so. He is also capable of helping people who can never repay him. He does it because mankind’s mind tells him to, just as it helps him imagine, devise, and invent ways to achieve his goal.

Galacti is satisfied that our tour group has understood that mankind’s mind is the key point of this comparison of man versus animals, and he thinks that after Inventory of the Universe we are ready for the next stage in our journey: Audit of the Universe.

This post is an excerpt from chapter 10.11 of Inventory of the Universe.

This video is … non-existent this week. Because there isn’t one. Oh yes, there are plenty about the brain, and some about mankind’s mind, but they give partial answers or give aspects of the mind. But, they don’t tell you WHY there’s a mind, why each human being that has ever lived on earth has one and why they are all so different. These videos don’t tell you WHAT the mind is, again, they touch on aspects and can give you interesting tidbits but they don’t go anywhere near a complete description.

When it comes to HOW the mind works, yes, through experience and technology we come to realize how certain aspects of the mind function… Each scientist, philosopher etc in his or her field has got answers. But we’re not just looking for ‘answers’, we’re looking for coherent completeness–answers that fit together and give us the real picture of all the puzzle pieces assembled together … perfectly.

That is the vocation of The Explanation. The MIND is the focal point of the entire Universe. It is still a mystery as to why the MIND can soar to the heights of imagination and greatness and at the same time sink to the depths of depravation.

Mankind’s mind is the front-and-center masterpiece of the Universe–the most important piece of the puzzle and the goal of The Explanation is to cover this subject and many more in the upcoming weeks. I’ll be starting to blog Volume 3 of The Explanation Series–Origin of the Universe–in just a few weeks now. The answers will begin to flow very shortly.

Since you read all the way to here… you liked it. Please use the Social Network links just below to share this information from The Explanation, Mankind’s Mind, the key to Awesome Ideas for Clearer Thought