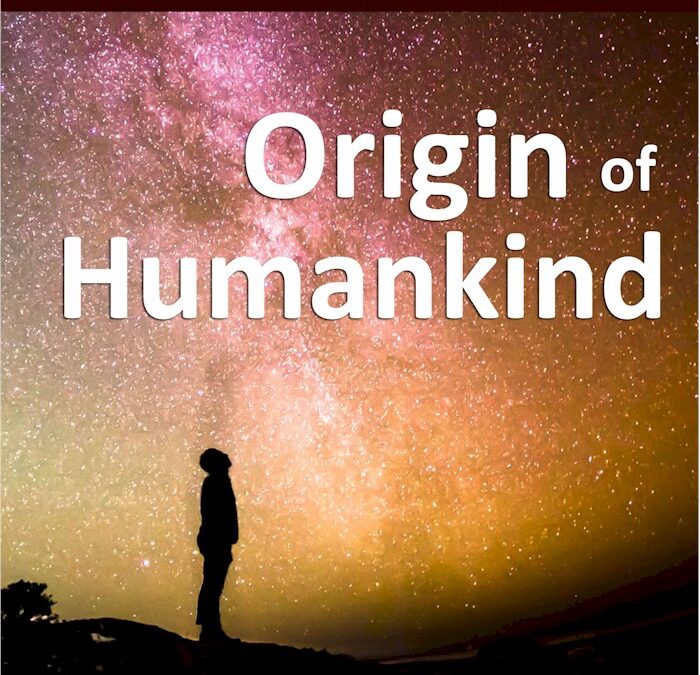 Who am I? What makes humans human? Why is humankind endowed with the capacity to rule Earth? 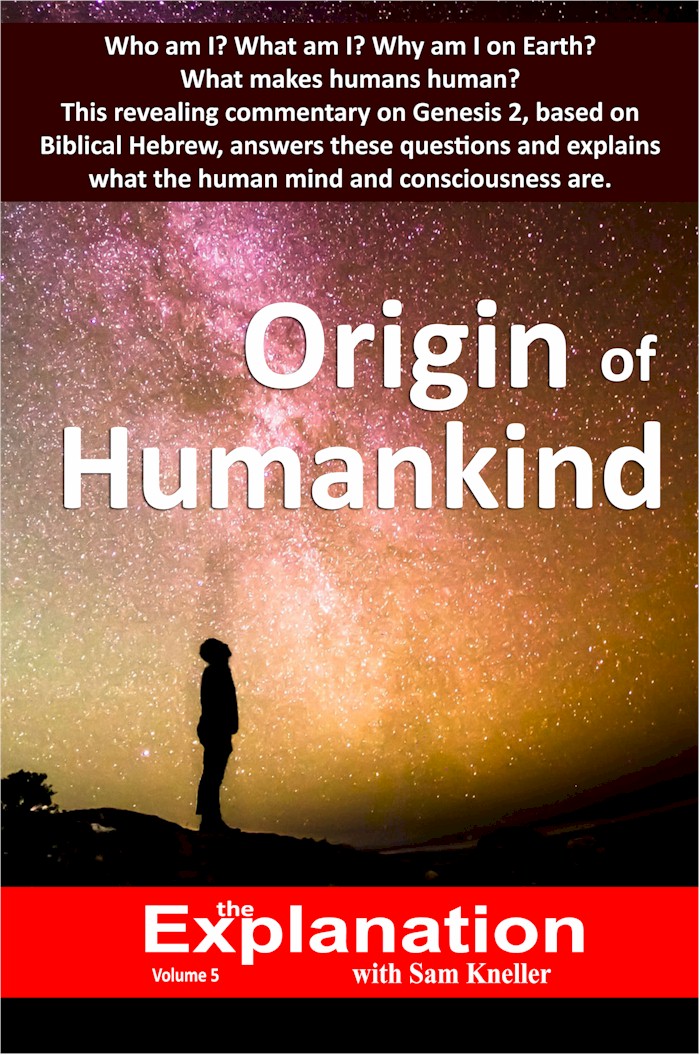 Who am I? Origin of Humankind will reveal the answer. Book cover of Volume 5 of The Explanation series.

Who am I? is one of those ultra-simplistic, yet unanswerable questions. In general, humankind is at a loss to know who they are. The fact that we can ask the question and search for answers reveals the uniqueness of humans. So far, with all the brains and research we’ve been able to muster over thousands of years, we’ve got a lot of conjecture, but no reliable answer. A solution that satisfies all the criteria of the human mind. Now, finally, after reading Origin of Humankind we have a satisfactory answer to the question, who am I?
(Origin of Humankind, Epilogue)

Over the last 10 months, The Explanation has expanded the end of Genesis 1 through 2:7. We mastered the Biblical Hebrew to unlock the depths of Bible meaning. We now have the story of the Creation of Man, half of humankind. We will see the amazing account of the Creation of Woman in the next volume, Origin of Woman. The importance here was to establish the composition, both material and immaterial of humans. The comprehension of neshama is foundational in knowing who I am. Psychologically, we don’t know how humans function, it’s no wonder mental disorders are the number one problem that plagues humanity. As we develop the subject of the human mind, we’ll see how it is negatively affected, but we’ll also see there are ways to minimize unhealthy behavior and develop sound minds.

This expounding or commentary on Genesis, entitled, Origin of Humankind, is book 5 in The Explanation series. It follows Inventory of the Universe and Humankind, Audit of the Universe, Audit of Humankind. and Origin of the Universe. Even If you’re a subscriber to The Explanation and read each article weekly, it would be difficult to see the overview. This epilogue does just that; it unites all 40 chapter titles, with the links to each one, and relates the coherent completeness of the Creation of man with the neshama, the human mind.

Learn the entire story and its relation to God and the spirit world. This narrative is part of the first five minutes, as the curtain rises on the script. Be on time and take your seat because you don’t want to miss the plot. Together with Genesis 1 and the following Explanation of the Creation of woman and Genesis 3, you’ll have a solid basis for grasping the entire plan of God for humankind.

Let’s put it all together. Here’s the answer to, who am I?

The story of humankind starts in Genesis 1:28 by answering the big question of the real origin of humanity. Were Humans Created, or did Humans Originate? Creation Day 6 (1.1). Right from this starting point, human reasoning that stands on observation, philosophy, and science parts company from believers in God. The development of Humankind takes two distinctly separate directions.

The Bible indicates Humans have the Likeness of God – What that Means (1.2) is that when you scrutinize humankind, you can see Godly features. Made in the Image of God – The Definition (1.3) is that humans are kin to God, not to animals. Humans were created in the image of God, in His Likeness (1.4). They have all the singularities of God, of course, on a human level, like having the ability to plan, create, turn their thoughts and actions into projects and accomplishments. Human Beings – God Created them Equal but Different (1.5), of the seven billion people on Earth, no two are alike, even identical twins. Yet, before God, each one has and especially will have an equal opportunity to become His son or daughter.

Male Gender – Its Significance and Why God Created it (1.6). From his genitalia to his role, males have the preeminence. The significance is that the male represents Christ, and He had and has Preeminence. In Hebrew, male is zachar, which also means to remember. Men are to remember their origin, from God, and also that Christ’s Preeminence is that He came to serve (Luke 22.26-27). Likewise, with men.

The Female Gender – its Significance and Why God Created it (1.7). The Hebrew nekava signifies hole, her genitalia, which, along with her sexual processes, are complementary to the male preeminence. This same hole gives birth and is the only natural way to multiply the population of God’s future sons (males) and daughters (females). Males depend on females in that area and many others. The female, as such, saves humankind; and occupies a prominent position. The two genders are equal before God; each gender endowed with the complementary masculine and feminine characteristics of God their Father.

God gave the male and female dominance over all the inanimate and animate creation. Their goal is to Rule Earth – To Rule the World is God’s Purpose for Humans (1.8). In Audit of the Universe, we asked the question, is the glass of peace and prosperity getting fuller or emptier? It’s up to you to answer that question. Consider the state of rulership of this Earth. That is the barometer of how humans are accomplishing their God-given purpose.

There’s a second all-important role God has given humankind. God Blessed the Male and the Female – Here’s the Meaning (1.9). It is marriage; the underlying key is relationships. The relationship is the beginning, middle, and end of a marriage. If there’s no relationship between the man and woman, the marriage will not succeed; this is true, not only in marriage but in every aspect of life, personal, professional, and leisure. Relationships bring happiness and fulfillment, not so, with money and fame.

God created humans to Rule the World. Humankind is on Earth for that Purpose (2.1). Genesis 1 Reveals Basics: Social Relations & Rulership (2.2). Genesis 2 continues to expand and flesh out the fundamentals of Genesis 1.  Immediately after creating the man and the woman on the sixth day, On the Seventh Day, God Continues Finishing His Work (2.3). There’s no record of the origin of the seven-day week, except in the Bible. Creation Week Reveals God’s Plan. Remember it (2.4). The restoration of Earth and its preparation of humankind, which now consumes 21 000 000 000 meals a day (what planet has that type of resources?) allows us to establish the Timeline of History, The Universe, Earth, and Humankind (2.5).

At the beginning of Genesis 2, another VIP Figure appears on the scene, Yahweh or Yahveh. Meaning & Identity of God’s Name (2.6). There’s a plurality of Spirit Beings; One carries the name Yahweh Elohim. Discover This Inseparable Relationship (2.7). Why the Bible narrative digresses to water: Rain falls on Earth Entirely Because Yahveh Initiated It (2.8). That’s the introductory background for what most, even believers, consider a figurative or even fictitious story of creation. However, elsewhere, the Bible shows us The Foolishness of God’s Word is True Theology (2.9).

Get ready for Sapiens, the brief but true story of humankind. The answer to the question, who am I?

3. Creation of Man and the Role of Neshama

The real origin of humanity started when God Created Man. Why the Bible says, God Formed Man (3.1). The composition of a human physical body is commonplace earth From Dust You Came. The Biblical Hebrew Meaning (3.2). The spark of life to animate the lump of clay came when God Breathed into the Nostrils of His Dust Man (3.3). The result of animated dust is a Soul, Nephesh, in Biblical Hebrew. Here’s the Definition (3.4). The Breath of Life God breathed into the first man is Neshama Reveals Humankind’s Relationship with God (3.5). Only God and humans (not animals) possess nishmat chayim. That’s plural for Many lives for You and Me? What the Bible Says (3.6).

Can science vanquish the anguish of death? Life and Death are Major Issues. Which One Prevails? (3.7). Life prevails because it’s plural and because God has a future for each human, but that’s another story. You and I, who can read and understand this, are unique creatures for the following reason: Neshama and Ruach Together Make Humans Human (3.8). And so, we arrive at the biggest mystery with which both theology and science grapple. Neshama Meaning? The God-Given Human Mind (3.9). The mind, not the brain, is the key to the story. Genesis 2 and the creation of man is only ONE VERSE. But from the perspective of answering the question, WHO and WHAT is a human, Genesis 2:7 alone, contains the essential answer, neshama.

Animals and humans do have a unique spirit in common, Ruach, The Core Senses of Sentient Beings (4.1). God’s spirit. The ruach Animates all Living Beings (4.2). Just as the understanding of neshama is vital, so is that of ruach. Two spirits. God’s Spirit and the spirit in Humans (4.3). The opening verse of the Bible presents the nature of the Spirit of God. The Spirit of God MOVED on the Face of the Waters. Meaning? (4.4).

These are the first five minutes of the movie, the presentation of the characters and forces in play. A Spirit God is the Author, Producer, and Director. Here’s the understanding of His role compared to the human part, The Spirit Realm & the Physical Realm Interconnection (4.5). And, the powers at work. That put puny universal powers to shame, Fluctuation, or Frequency of the Power of the Spirit (4.6). Yet, human dust people in a dust universe have their role in this cosmic story, Material World, Spiritual World. Are They Compatible? (4.7). Genesis 2 tells us explicitly, WHO WE ARE, Human Person; this is What Defines You as Human (4.8).

5. Mind and the Theory of Everything

Solving the mystery of the human mind. Genesis 2 is down-to-earth. It answers the big questions in life. What confers on homo sapiens their intelligence? Human Mind and Mind Power. Neshama and Ruach (5.1). God is a hands-on caring Creator, The Holy Spirit of God. Its Interrelationship with Humans (5.2). Animals are in the equation, they do have capacities but nothing like humans, here’s why, Animal Spirit is Not Spirit Animal, But They are Related (5.3).

The reality of what God gave humans at the instant of their creation, Human Software – God Breathed Neshama into Adam (5.4). Science naturally focuses on the brain, but what about the unseen and immeasurable? Human Brain. Its Role in Consciousness and Mind (5.5). Beyond the mathematical formulas of the physical forces that hold the Universe together, lies something which clenches the physical and spiritual into a tightly knit unit, The Theory of Everything. Universe and Consciousness (5.6). In the end, the physical decays; that’s not God’s emphasis, the material is a means to the end. That end is spiritual and involves the spirit component in humans. Understanding the Human Mind. Key to God’s Plan (5.7).

Now it’s time to learn about the Creation of Woman. Only one verse (Genesis 2:7) is dedicated to the creation of man, there are no less than eight verses for the woman. Mystery shrouds such statements as “bone of my bones,” after all, would you declare that on seeing a beautiful woman you’d never laid eyes on before? I doubt it. Learn what this statement reveals, launch into Origin of Woman, the sixth book of The Explanation series. Let the Bible answer the question “who am I?” specifically for women.

This blog post is an excerpt from the Epilogue of the book, Origin of Humankind.

Since you read all the way to here… you liked it. Please use the Social Network links just below to share this information from The Explanation, Who am I? What am I? Why am I on Earth?