Forgiveness, the Healing Bond for Humans to Function Peacefully 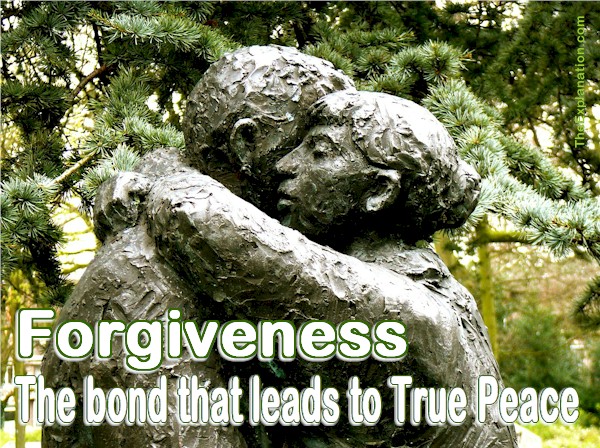 Forgiveness, the last of the 7 steps of how humankind functions, is the healer, that alone leads to true peace.

To reach the seventh step of forgiveness, let’s resume the six-step scenario of how humankind functions. Let’s especially see the casualties strewn out–the consequences–along this arduous path to peace.
(Audit of Humankind, chapter 2.12)

Here are the first 6 points and the confusion they sow.

Because humans are human, we are very imperfect in the application of how humans function. That’s why we need forgiveness.

Even if all the steps were applied perfectly by others (which is certainly not the case) we’d still need forgiveness. Why? Because first and foremost forgiveness has to be applied to yourself.

You’re walking around right now carrying a huge burden of guilt. If you have the least amount of sensitivity towards those in your entourage, your family, children, parents, grandchildren, grandparents, aunts, uncles cousins … not to mentions all your friends, colleagues and acquaintances. You know you’ve done them wrong to one extent or another. No details, because you know the details. When you wake up and become aware of this situation or a family member or friend makes you aware of a situation and step 6, self-reproach, kicks in … that’s when guilt hits. You’re sorry for your wrong-doing and depending on the extent of damage you’ve caused that guilt can be overwhelming. That’s where forgiveness of oneself starts.

Forgiveness is the follow-on after self-reproach. Part of trying to repair the damage is re-opening and re-establishing communication. The presence of guilt is a hindrance. The remedy is a good dose of forgiveness.

In this expose of the seven phases of how humans function my intention is not to explain how to overcome the negative and exert the positive. In Audit of the Universe, I’m still turning over the pieces of the puzzle. It’s impossible to fix a problem if you don’t know what you’re working with. To reach peace for humankind we have to first know how we function. That is the sole point of this chapter. To explain WHAT the seven steps are.

In Origin of Humankind, I will not only explain HOW to reach peace but especially WHY each of these seven steps exists and is an essential part of humankind’s development and future.

First comes the realization in an individual that a change of habits or life-direction is necessary. Once the intent is there it’s accompanied by an effort to modify one’s behavior–that’s self-reproach. Only when this sixth step is initiated can an individual begin to forgive themselves for their past errors. Only when self-reproach has been initiated by someone who’s done you wrong can you begin the process of forgiveness.

Self-reproach is getting a handle on and beginning to master one’s human nature (step 1) and choices (step 2) of conduct. This gives rise to improved behavior which opens the way to forgiveness. Change and forgiveness go hand-in-hand.

Human nature and choices (steps one and two) can and do happen effortlessly. It doesn’t take much to unleash negativism and make irrational choices leading to fraught behavior. To the contrary, it takes concerted personal awakening, inner-fortitude, and outward-effort to exercise self-reproach and forgiveness (steps six and seven). The two ultimate steps of how humans function are a personal about-face decision of the first two steps.

Forgiveness caps off the entire process because it alone can begin to overcome and wipe away all the tears and hurt each one of us has been subjected to during our entire lives. This can take time, much time, but forgiveness alone permits a reduction and eventual eradication of negative thoughts in your mind.

Yes, it all comes back to our minds. That’s where human nature and free will choices grip and manipulate us. At some point, it’s also in our minds that we decide to turn our lives around which includes beginning to forgive ourselves and others for wrongdoings. Ultimately we’re looking for that forgiveness that leads to peace of mind for all parties.

I’d like to share this movie with you. Our human nature and free will have broken all of us. If you don’t know that, you just haven’t realized it yet. This film is about the worlds of a depressed psychologist and an emotionally disturbed homeless woman that collide. While trying to rescue her they fall in love, and each gets a second chance at a new life. It shows how proper personal self-reproach and a good dose of forgiveness lead to peace.

Beauty in the Broken. A moving film that illustrates the need for forgiveness and acceptance.

Forgiveness is not easy and it poses many difficult questions. In our perfectly assembled puzzle, these questions require answers. They shall be forthcoming.

It is this inner functioning of humans, with every single influence of heredity and environment that makes us the imperfect humans we are–that mixture of human nature, free will, and behavior. Ethics, justice, and self-reproach can be and generally are far from perfect, adding to our human frailties. To begin to clear up bad feelings, and worse, that have been created, the final ingredient, forgiveness, must be added, well kneaded, and well mixed-in to bind humanity. We’ll need an immense portion to reach coherent completeness of humankind.

Ultimately forgiveness is the one element that restores communication and calmness and finally peace between people and peace of mind.

This blog post is an excerpt from chapter 2.11 of the book Audit of Humankind.

Since you read all the way to here… you liked it. Please use the Social Network links just below to share this information from The Explanation, Forgiveness, the Healing Bond for Humans to Function Peacefully