Human Behavior is the Expression of Human Nature and Free Will 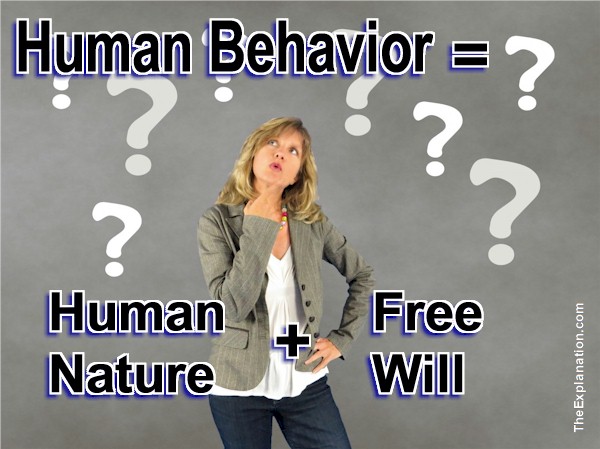 Human Behavior—the way humankind conducts itself—is the result of a combination of the first two pieces of how man functions. Human behavior = human nature + free will.

Human behavior is the sum total of our actions expressed following the interconnectivity of our human nature with our free will.

Human behavior is the third step to grasp how humankind functions.  human nature, their character, personality, temperament, emotions, thinking, consciousness—the 1st characteristic of how humans function coupled with free will, the capacity to decide whatever they want to do—be it vicious or virtuous, uncaring or compassionate—the 2nd characteristic of how man functions gives rise to human behavior.
(Audit of Humankind, chapter 2.6)

Human behavior is the cake each human being bakes when they mix all of their particular human nature with their portion of free will. The term human behavior is neither negative nor positive. It is totally neutral. Each person who walks the face of the earth has their specific and particular human behavior. Depending on dozens of factors—including heredity, environment, culture, education—as well as decisions made in the mind of the individual.

Human Behavior = Human Nature + Free Will. Human behavior is the cake each human being bakes when they mix all of their particular human nature with their portion of free will. Click To Tweet

How humankind treats their time and space. How humans consider and manage everything, from Space to Mind, which they oversee, both individually and collectively. Our human behavior is simply the visible result of our invisible distinctive human nature (including how it’s colored with our personal nature-and-nurture) and particular choices (including how they’re colored with our personal nature-and-nurture).

Human behavior is generally a mixture of both–degrees of positive and degrees of negative: The husband who has bad employment habits but who will do anything for his family. The wife who consumes too much alcohol but is devoted to her children… Human behavior polarizes to good and bad and can be an in-between mixture of both or even apathy and nonchalance. Each individual’s behavioral mixture–their ingredients in their one-and-only cake brand–gives rise to more than seven billion plaid quilted behavioral patterns on planet earth.

Human behavior polarizes to good and bad and can be an in-between mixture of both or even apathy and nonchalance. Each individual's behavioral mixture of all their ingredients is their one-and-only behavioral brand. Click To Tweet

We’re getting into some deeper analysis of humans now. Various pieces of the puzzle that were stand alone—and even questionable as to their relevance, indeed their very existence—are now being fitted together. Humankind in general and psychologists, in particular, know that these various pieces exist:

Human behavior is: How each man and woman, each one of us, is going to use food, water, every material atom we come in contact with, every immaterial thought or word that passes through our brain. How humans use every single physical and mental tool that equips their body and mind. How humans behave towards fellow man.

You noticed above that point one of the pieces of how humankind functions is their mind. This piece is the keystone, initial element to understanding behavior. In English, we use the word attitude to define this. The Cambridge dictionary says: A feeling or opinion about something or someone or a way of behaving… As an example it gives: I don’t like your attitude (= the way you are behaving). As you can see it ties attitude—in the mind—directly to behavior; its outward bodily exhibition.

Another definition adds an important point we’ve already discussed but which bears repetition: ‘A settled way of thinking or feeling about someone or something, typically one that is reflected (Sam’s emphasis) in a person’s behavior.’ In other words, the attitude of mind precedes and gives rise to—is reflected—a particular behavior.

Many other expressions convey the idea of attitude: Viewpoint, outlook, perspective—it’s all about one’s convictions, feelings, and ideas. This is all part of the thinking-mind process. It’s all part of our human nature.

As an aside—but in the context of mind—I’d make the point that on a brain scan you CANNOT see an attitude, only the expressed RESULT, the bodily manifestation, of the attitude. If an attitude is ambivalent, you cannot see what that ambivalence is: you can’t tell whether the child wants the toy but knows that his parents have said not to touch it.

You can’t know that a woman has fond feelings towards a happily married man—or vice versa. This is all part of the undetectable mind process which we humans can cover up so well. To the extent that we can have opposite attitudes and behavior towards someone we have to work with but whom we do not appreciate.

Examples of attitude and behavior:

In the context of answering the question: How would you bring peace and prosperity to earth? This working duo of attitude and behavior is central. We live in a society of people. Each person is endowed with human nature and free will. This human nature coupled with free will give rise to every type of thought or attitude of mind which then is outwardly expressed by a person’s behavior. Each person can do whatever they want.

We live in a society of people. Their human nature coupled with free give rise to every type of thought or attitude of mind which then is outwardly expressed by a person’s behavior. Each person can do whatever they want. Click To Tweet

IF we want to cohabit with a sense of harmony’ then we have to consider how to deal with this third piece of how man functions: attitude and behavior.

From chapter 10—The Singularity of Man—we can see that man can go both ways. These contrasting concepts of good and bad—within mankind’s behavior—are important to underline without going into any pro-or-con considerations for now.

It is clear that humankind has behavioral dilemmas–we have behavioral issues that we have to deal with. Here are just a few that are being debated, even hotly disputed: Abortion, euthanasia, gay marriages, family, GMOs and the use of stem cells. Those are big controversies but there are many little quandaries that can affect our day-to-day living: Adding a personal expense (lunch) to a business expense, tax evasion, not returning change when a cashier makes a mistake in your favor…

We are showing that if a child or adult—any human being—has whatever behavior that characterizes them it is because they have human nature—their character, outlook, temperament, personality, attitudes—and each has made a choice whether intended or unintended—to conduct themselves, via thoughts, actions and deeds in a particular way. That is a definition of behavior.

This blog post is an excerpt from chapter 2.5 of the book Audit of Humankind.

Since you read all the way to here… you liked it. Please use the Social Network links just below to share this information from The Explanation, Human Behavior is the Expression of Human Nature and Free Will