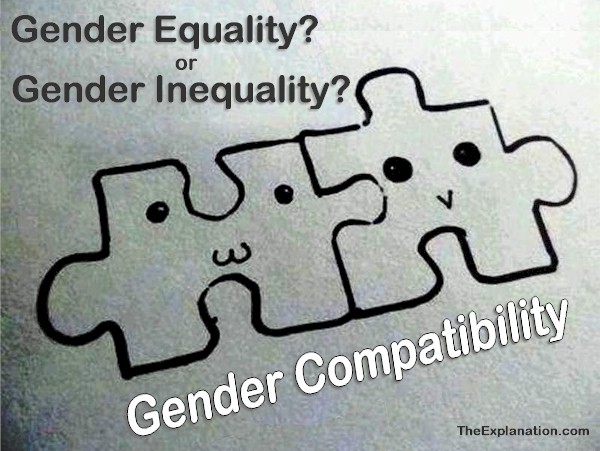 Gender equality makes headlines. Over the last few years, its come to the forefront as very controversial. How does it sit with human society?

Gender equality hit the headlines again. As I write this the women’s final just took place at the US Open Flushing Meadows tennis tournament. With the outcome we all know, an unfortunate conclusion to what is intended to be a tennis festive occasion.
(Audit of Humankind, chapter 3.3)

Last week I repeated the statement, maybe ad nauseam, that all humans are equal. I’m starting this post with the same affirmation because it will be necessary to keep that key point in mind.

If you’ve come across this blog post for the first time then please know that it is part of a larger work – Audit of the Universe. See and read the entire context online, click here.
We’ve reached a significant point in Audit of the Universe. We’re discussing major controversial issues of society. The goal is to clarify each of these puzzle pieces.
I’m asserting certain values. Why these assertions? What are they based on? The answers are found in the next book Origin of the Universe which you can read online here.

Let’s discuss genders, plural. How many genders are there and what are they? The differentiation of gender and sex to denote human beings goes back to about the 50’s but takes on real differences around the 80s. Today gender identity and gender roles have become an issue for usage in language, responsibilities in religion, focus on poverty and even a question in the discussion of climate change. Pandora’s box has been opened.

Audit of the Universe has no intention of entering this debate. However, gender equality, gender roles, and gender identity are vital to understanding when it comes to social relationships. We all agree that there are genders, plural.

Here’s how I intend to cut through the Gordian knot. The only way to have a baby and hence to perpetuate human society is for a male and female to come together. I’m not including all the medical assistance that can be associated with conception simply because it is not available to most people and mainly because it is a very recent development.

Obviously, I’m not suggesting that. I’m talking generally because a good part of that population is pre or post age for having babies. That said, when the older were younger and when the young get older that potential is there. Remember, the definition of a species is that it can perpetuate itself. In that, I reiterate, all humans are equal and both males and females must participate in this perpetuation of the human species.

It takes a male and a female to procreate a new human being. Therefore, there are two genders. All humans are equal and both males and females must participate in this perpetuation of the human species. Click To Tweet

Now, for the sticky question, are the two genders equal? Is there gender equality? I was going to display a diagram from Le Point magazine from 7 December 2017 entitled Pas de parité en sport — No parity in sports. It shows the difference in the accomplishments of women and men. For instance, in one hour a woman can bicycle 48 km whereas a man can do 54.5 km and so on. Immediately there’s a gender difference.

I don’t believe it’s disrespectful either to point out these strength disparities and to conclude that the female and male genders are not equal. We can take this comparison into the biological, social and psychological fields and enumerate all sorts of real factual differences. This doesn’t correspond with gender equality. John Gray, in his bestseller, Men are from Mars. Women are from Venus, entitles chapter three, The Primary Differences Between Men and Women. He mentions the thickness of skin, length of vocal cords, the structure of blood and bones, the ratio of muscle to blood, and on and on. If there are primary differences, then there are also secondary differences.

As I write this, emphasizing the disparity between men and women, keep in mind: ALL HUMANS ARE EQUAL. I pointed out that we are 7 billion human beings, both EQUAL and UNEQUAL individuals. I’m now pointing out that although all humans are equal and unequal, humanity is made up of two genders that are unequal. Please keep in mind the nuance: Humans are equal, genders and individuals are unequal.

Please keep in mind the nuance: All humans are equal, genders and individual human beings are unequal. Click To Tweet

Human society consists of human individuals. Those individuals are divided into two separate groups, females and males. If we want to have births this fundamental knowledge is evident. This blog post and this book, Audit of the Universe, are presenting an overall view of all the puzzle pieces that make up humanity on planet Earth. It is not my intention to go into the details and support material for demonstrating these two genders and their distinctness.

There are other fine books that do define the genders. Especially written by people who have years of hands-on experience dealing with such issues. One such experienced individual is Dr Leonard Sax. He published, Why Gender Matters, Second Edition (August 2017): What Parents and Teachers Need to Know About the Emerging Science of Sex Differences. This book has its controversies and dislikes but it is replete with abundant research and classroom experience to tip the balance fully to the realization that each gender, male, and female, has its specificities that need to be recognized and enhanced, not ignored and diluted. Here’s one quote from a reviewer that sums up this capital point.

Fascinating… This book takes an ‘outside the box’ position on gender. Paradoxically, Sax says, gender-neutral education favors the learning style of one sex or the other, and so only drives men and women into the usual steriotyped fields. The best way to raise your son to be a man who is caring and nurturing, says Sax, is to first of all let him be a boy.
The best way to produce a female mathematician is to first of all let her be a girl…. I think Sax is on to something. Mature men and women do draw on qualitites that steriotypically belong to the opposite sex. But the easiest way to get them to that point is to first make them confident about being a man or woman. This is a powerful, even obvious insight, once you dare think it.”
–Stanley Kurtz, National Review Online

Dr. Sax preconizes knowing your gender identity first. Each of us is an equal human being and at the same time a singular, unequal individual. In order to fit into the household of human society you need to know what type of brick you are, exactly what is your gender and beyond that what your skills and talents are. Know your equality and your individuality.

Whereas human beings are equal, as Kurtz says, we’ve forgotten the obvious insight that males and females are different, that 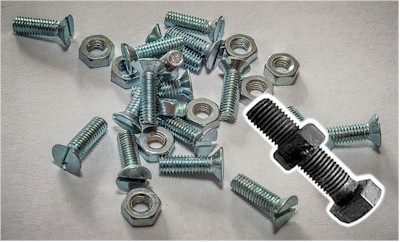 It’s not about gender equality. To build viable social relationships, females, and males, each with their gender identity, talent identity, skillset identity psychological identity must fit together. Each contributes their valuable singular self and takes their position as a nut or a bolt eventually finding that someone of the opposite gender to form a nut and bolt compatible couple that will strengthen the structure of human society.

Each human contributes their valuable singular self. Each takes their position as a nut or a bolt, eventually finding that someone of the opposite gender to form a nut and bolt compatible couple that strengthens human society. Click To Tweet

When Kurtz refers to obvious insight, remember that before ultrasound scans and DNA pregnancy tests, we had no way of knowing the gender of a baby before birth. When the nurse exclaimed, “it’s a girl,” “it’s a boy”, the evidence of their gender identity was their genitals. Boys have a penis and girls have a vagina. That is obvious insight. Genital compatibility of the two genders is one of the most visible and wondrous physiological phenomena that exist.

This singular bolt that can penetrate and be received by a singular nut. Two complementary organs that represent the male and female genders. Singular and complementary at the same time. Only together do they procreate life and constitute social relationships, the beginning of human society.

This blog post is an excerpt from chapter 3.3 of the book Audit of Humankind.

Since you read all the way to here… you liked it. Please use the Social Network links just below to share this information from The Explanation, Gender Equality, Gender Inequality or Gender Compatibility?