On the Seventh Day God Continues Finishing His Work 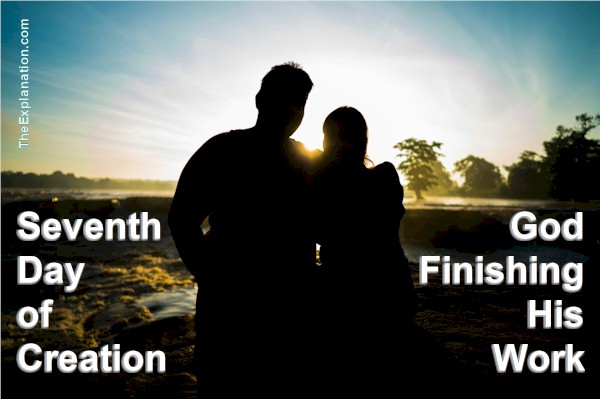 On the Seventh Day of Creation, God continues the finishing process by working with Adam and Eve

On the seventh day of Creation, God continued to finish His work with human beings.

The seventh day of the week, known as the Sabbath, was not a day of idleness. God is not idle. He continued to work with the finished physical Creation of Adam and Eve. The perfecting of their mental process would take time and involved their cooperation.
(Origin of Humankind, chapter 2.3)

If you’ve come across this blog post for the first time, then please know that it is part of more extensive work. To see the entire context, which you can read online, click here.
You can follow along by using the online Bible, the Interlinear Bible, Strong’s Concordance and the Hebrew/Greek Concordance at UnlockBibleMeaning.com
To understand how I’m using Biblical Hebrew, read this short presentation of 7 keys to Master Biblical Hebrew
Dig for Bible Study gems to enhance your understanding: See ‘Further Study’ suggestions at the end of this blog post.
Galacti is our fictitious time-traveling, investigative, roving reporter who lends his insights and voice to the development of the narrative

The six days of Creation are complete. Everything is in order. This order includes all the elements that I discussed in Inventory of the Universe. Starting with outer space, the atmosphere, water, land, flora, fauna, and humans with their brains and mind. One goal in that book was to point out the complexity and intricacy of our earthly home. How systems within systems within systems, be it the weather or the synthesis of cells, are all synchronized and harmonized. How chronobiology, the seasons for harvesting, gestation for birth, mesh time with the animate and inanimate worlds.

Inventory of the Universe is an ode to Creation. True, the book never uses the word Creation, and there’s no mention of God. That was intended. A description and explanation of our world, especially coupled with spectacular imagery, should be sufficient to cause people to stop and think about real origins. Can so many intricacies and so much beauty be the fruit of nothingness? Everyone is free to believe what they want, all I’ll say is you’ve got to have a lot of faith to believe our universe, our world, and human minds come from oblivion.

Here’s the scenario at the end of the 6th day. God was there with what He’d just created, in particular, the man and woman. What was the next step? The seventh day?

Let me paint a quick picture. What happens immediately after a couple, namely the woman, gives birth? She rests. But that’s not all. Sure, she has to start immediately caring for the baby, nursing, changing, cuddling. Along with the husband’s participation, these are all part of the joy and admiration for the new life. It’s time-off or time-out with focused concentration on the newborn.

Well, we can apply that analogy to what God did with His masterful humans, His newborns. You might think, at this juncture, that such an analogy is out of place. Taking a human birth-giving example and applying the principle to God. When we get into Genesis 2, I will explain why such an analogy is correct. Keep in mind the principle; all humans possess the image and likeness of God. If God’s got it, then humans have what God’s got.  A little more patience, please.

Look at these two verses and answer the question, which day did God finish Creation?

31 And God saw every thing that he had made, and, behold, it was very good. And the evening and the morning were the sixth day.

Yes, I highlighted parts of these verses. Verse 2:1, referring to the 6th day, says the heavens and earth were finished. Verse 2:2 says on the 7th day God ended His work. To top it off, in the original Biblical Hebrew, the words finished and ended are identically rendered by the same word, כָּלָה kâlâh, H3615. Why did the translators use two different English words here?

I think the translators saw the problem here. If you finish work on the 6th day, you can’t follow immediately by saying on the 7th day God finished His work. That doesn’t make sense. We’ll start by understanding the various translations of finished/ended, H3615, and t. Notice the usage in a progressive sense.

כָּלָה kâlâh kaw-law’; a primitive root; to end, whether intransitive (to cease, be finished, perish) or transitived (to complete, prepare, consume):

KJV – accomplish, cease, consume (away), determine, destroy (utterly), be (when… were) done, (be an) end (of), expire, (cause to) fail, faint, finish, fulfil, ⨯ fully, ⨯have, leave (off), long, bring to pass, wholly reap, make clean riddance, spend, quite take away, waste.

You can see that it is much broader than just finished or ended. It includes such concepts as bring to pass and longing. Both of which indicate the action is NOT fully complete. Here are several verses which include H3615

Deuteronomy 32:23 I will heap mischiefs upon them; I will spend (H3615) mine arrows upon them.

Ruth 2:21 And Ruth the Moabitess said, He said unto me also, You shall keep fast by my young men, until they have ended (H3615) all my harvest.

2 Samuel 13:39 And the soul of king David longed (H3615) to go forth unto Absalom: for he was comforted concerning Amnon, seeing he was dead.

1 Kings 17:16 And the barrel of meal wasted (H3615) not, neither did the cruse of oil fail, according to the word of the LORD, which he spoke by Elijah.

These verses show the action not completely finished. The motions are still in progress. A better translation would go like this. On the sixth day, the heavens and the earth were finished (H3615), and all the host of them. And on the seventh day God was ending, was finishing (H3615) his work which he had made.

During the first six days, God created the structure (heavens and earth and all the host, everything to do with that structure). On the seventh day, He was finishing that structure. It’s like anything we make or manufacture, a boat, for instance. You build the boat from wood or steel. Once the hull, mast, funnels, engine, decks, cabins, rooms are FINISHED, you still have to do the sanding, painting, and decoration. God finished the structure of the Creation in six days, but then He continued finishing it on the seventh day.

Genesis 2:2 “on the seventh day God ended (H3615) his work which he had made.” What then was God ending on the seventh day? His work. The immediate idea is that work refers to what He did during the first six days. We now see that is not the case. God is finishing work that was created during those six days. What work is this? Here are the KJV alternate translations and the root meaning of work.

מֲלְאָךְ mălʼâk mal-awk’; from an unused root meaning to despatch as a deputy; a messenger; specifically, of God, i.e. an angel (also a prophet, priest or teacher): KJV – ambassador, angel, king, messenger.

Work can and does refer to all types of labor, including what God accomplished in the first six days. Although, what occurred during that timeframe was the work of God. Work refers to business occupations and workmanship done by human beings and work-animals in general, there’s no denying this. However, I’d like to go a step deeper and look at the origin of work in H4397.

Here it is clear. Work (מֲלְאָךְ mălʼâk H4397) only refers to human and angelic beings. With the emphasis on beings.

The understanding is God completely finished the Creation of the structure, including all beings (animal and human with the human brain and mind) during the first six days. All the atoms and elements were put in place and were in working order. On the seventh day, He continued working with human beings, Adam and Eve. They were God’s king (KJV translation of H4397) and queen placed on earth as His messengers and ambassadors. On the seventh day, God gave them oral instructions to accomplish their mission as royalty, messengers, and ambassadors for Him. God continues to finish His work today by giving us written instruction via His Word, the Bible. Humans are the work (H4397). God continues to finish (H3615).

God is still working with humanity. Timewise, the original seventh day is long-gone, but God will continue working with all humans until His plan of what He has in mind for this royalty, these messengers, and ambassadors is complete. Plenty of finishing His work took place on the initial seventh day, and it prefigures the entire story of God’s relationship and goal for His Creation. There is much more explanation to come.

I’ve already devoted several posts to Genesis 1:31-2.6. Here’s the first one. They follow one another and there’s a link at the bottom to navigate to the next blog post. They give further meaning to the Biblical Hebrew and hence, a more in-depth understanding of God’s relationship with humankind. How God wants to be with us and is in the to-do process of bringing about His plan. I highly suggest you reread those posts; they will enhance your Bible comprehension.

God allowed humans to have two characteristics, human nature and free will. He did that for excellent reasons, which I shall explain. God knows the nature of man (John 2:25), and the seventh day is a specific part of Creation week to deal with this issue. Because of those two constraints which are directly involved in human behavior, reaching His goal will take a certain length of time. God planned human nature and free will just as he outlined the duration of time. He has it all under control and His plan is proceeding according to His will.

This blog post is an excerpt from chapter 1.12 of the book Origin of Humankind.

Since you read all the way to here… you liked it. Please use the Social Network links just below to share this information from The Explanation, On the Seventh Day God Continues Finishing His Work