Imagination – Another Singularity of Humankind in Your Mind 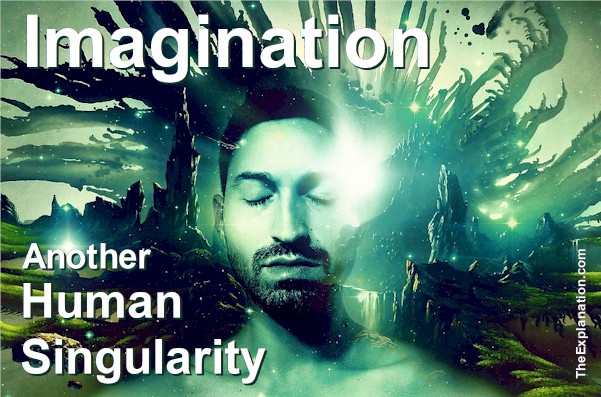 Imagination, your ability to have fresh, innovative ideas pop into your mind which you can meditate on, develop, and even create.

Imagination – another human singularity you possess in your mind, at the origin of many projects.

Imagination, that’s today’s topic, but keep in mind, it’s within the overall theme of the singularity of humankind–what makes humans just that, human. Imagination and dreams–thoughts about possibilities–are singular to humans. In the animal kingdom, only fictitious Disney cartoon animals can dream and imagine a better future.
(Audit of Humankind, chapter 1.4)

We’re laying the pieces of the puzzle on the table and turning them right-side up. Here’s a puzzle piece question: What is humankind? You know that’s a critical piece. And we saw the Smithsonian Institution‘s response from standing upright to changing the world.

A more thorough definition of humankind must include and even focus on the non-physical nature: Mind. The mind is the base of everything human. Imagination is a fundamental cornerstone element of the mind and therefore is one of the key defining aspects of who you and I, we humans, are.

A definition of humankind must focus on their non-physical nature: Mind. The mind is the base of everything human. Imagination is a cornerstone element of the mind defining who you and I, we humans, are. Click To Tweet

Imagination starts at a very young age. In my bedroom, I imagined I was a steward in a plane; later I had the idea–that’s practical imagination–for a business. As a teenager I dreamed–that’s projective imagination–of joining the Canadian Navy because I loved the ocean. I did have a business but never came near the Navy–some dreams come true, some imaginations become unfulfilled memories. What are your imaginings?

Our consumer society is filled with imagined merchandise — the created results of ideas and concepts that started in someone’s conceptualizing mind. Whether you take shoes, handbags, hairdo’s, jewelry, furniture, gardens, architecture, cars, books, vacations, adventures, entertainment, the list never ends. In our world today, we have more physical and non-physical ‘things’ than ever before in the history of humankind.

Each one of these products or issues was first a figment of their creator’s imagination, a flash of insight, a daydream, or maybe even a night-dream. Imagination is where everything starts. No imagination and we’re mindless, just like animals.

Each one of these products or issues was first a figment of their creator's imagination, a flash of insight, a daydream or maybe even a night-dream. Imagination is where everything starts. Click To Tweet

One of our daily activities, eating, is also one of the most imaginative when it comes to creating new tastes. Potato chips and yogurt continually surprise us with their unconventional flavors. I’ll have to find the reference, but I believe I read that they’re imagining and creating three new tastes each day. That’s prolific imagination.

In France, ‘cuisine’ is the name of the game. Not only the millions and millions of different mixtures of starchy foods, vegetables, spices, meats, fish, but also with the artistic way they’re present on a plate. Think of the sheer number of recipes available. Some, like wedding cakes, are such works of art you feel bad cutting them into mouth-watering slices. Each one of these gastronomic delights ignited in the imaginative mind of someone wanting something a little more exotic.

Humans are the only beings that not only possess imagination but who can take whatever they’ve imagined and, through creativity, turn it into reality.

Did you know there are more varieties of tea than of wine? Henrietta Lovell had a novel tea tasting experience in China in 2004. She imagined her future in tea, returns to London, and abandoned her job in finance to become the Rare Tea Lady. Imagination (and hard work) pushed her through people who didn’t believe in her idea. Today she provides her brews direct from the fields of Asia and Africa to the finest restaurants in New York and Paris. The power of imagination ignites life.

Ron Suskind’s three-year son, Owen, slipped into sudden sheer silence. He is autistic and became obsessed with Disney cartoons. Imagine a therapy. Imagine How to help. Imagine how to bring your son into ‘this’ real world. He did. His best-seller book, Life Animated, explains how, for years, he and his wife imitated Disney characters to which Owen responded. Through imagined characters with imaginative play therapy, Owen now envisions becoming an artist for Disney. Imagination helps others with their lives.

The world of songwriting is ripe with imagination. There are even songs about imagination. You know this one by John Lennon. Listen, read the lyrics, and imagine.

Imagine there’s no countries
It isn’t hard to do
Nothing to kill or die for
And no religion, too
Imagine all the people
Living life in peace… You…

Imagination takes on every tone imaginable. Now, read the words of ‘Demons,’ a song by Imagine Dragons. Their name is an anagram for a phrase only known to members of the group, Given the lyrics you can imagine where this is going.

Your eyes, they shine so bright
I want to save their light
I can’t escape this now
Unless you show me how

This song is very dark imagination, very dark indeed. I will not get into it here but think of the words Jesus prayed in Matthew 6.10 ‘Thy kingdom come’ and compare it. Imagine Dragons has an opposite view of the kingdom. Their imagination has nothing to do with that of John Lennon. I point this out because imagination can go both ways and everything in-between. That’s because of humankind’s dual nature. It can enlighten, and it can darken.

Vivid imagination acted on, leads to resourcefulness, creativity, and fulfillment. That’s the story of humankind. Our minds are overflowing with ways we think things–everything–can and should be done. Imagination is an-entire-book-subject, and maybe someone has already written it. One man, Jay Walker, has collected it. He has created the Library of Human Imagination with a fantastic array of artifacts to illustrate this singularity of humankind.

This trait of imagination inhabits every human being worldwide, regardless of race or creed; this is another of those singular characteristics that identifies WHAT humankind is. The real question is: WHY are we endowed with imagination? And the real answer is forthcoming in upcoming blog posts and the future book Origin of the Universe. Stay tuned.

Vivid imagination acted on, leads to resourcefulness, creativity, and fulfillment. That's the story of humankind. Our minds are overflowing with ways we think things--everything--can and should be done. Click To Tweet

This blog post is an excerpt from chapter 1.5 of the book Audit of Humankind.

Since you read all the way to here… you liked it. Please use the Social Network links just below to share this information from The Explanation, Imagination – Another Singularity of Humankind in Your Mind