Mind over Body, Why we Keep-or not-New Year’s Resolutions 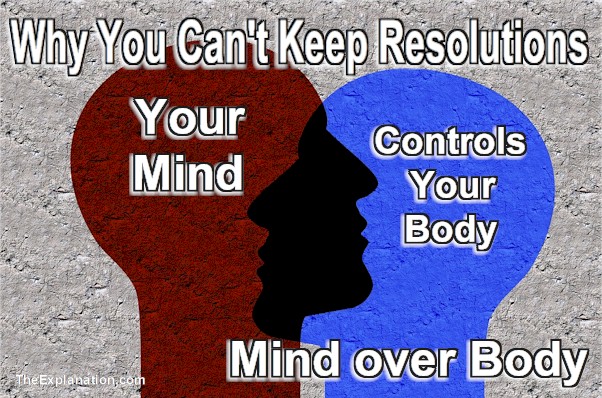 Mind over Body. The reason why we have difficulty keeping New Year’s resolutions. It’s hard, really hard, to guide the mind.

Mind over Body. It’s very hard to maintain the mind in the right direction, keeping a New Year’s resolution.

Mind over body, that’s the equation for keeping New Year’s resolutions. It’s the formula for human welfare: Proper information input into the mind and proper bodily expression of those principles. Easier said than done. Because mind over body can make wrong resolutions. Because the body doesn’t always do what the mind decides… Humans need wisdom and will-power (another human singularity).
(Audit of Humankind, chapter 2.2)

Human pursuit of Peace and Prosperity

The rest of Audit of Humankind addresses the way humans function and how they are trying to find solutions to establishing peace and prosperity. Human are giving it their best shot. Where are we in our pursuit of these much sought after but oh so elusive nirvana conditions?

Human welfare: Proper information input into the mind and proper bodily expression of those principles. Easier said than done. Humans need wisdom and will-power. Mind over body. Click To Tweet

The seven steps of this chapter reveal an overall framework of how we humans function. Our ‘inner workings’, in particular what goes on in our minds and how that expresses itself through our bodies.

It is to emphasize the superior mental capacities of humans.

Human singularity permits us to operate at a vastly higher level than animals: The only reason for this is we have a mind. Neuroscience is still trying to figure out the relationship between body and mind.  From here on in Audit, we are going to deepen our understanding of how the human mind functions and see where it has led us at the beginning of this 21st century.

Here’s a real life example that a lot—if not most of us—have lived to illustrate the meanderings of your and my mind: we know in our minds we’re late for an appointment so we make a decision to speed up the car. Our foot then presses down on the accelerator and we end up breaking the speed limit. This mind think, body do mechanism is the basic functioning of humankind around the globe.

It is this mind think, body do that gives us our individuality. Sticking with the analogy of ‘thinking’ about travelling to an appointment, some will think I’ve got to arrive there 3 hours early, or before rush hour, or via public transport, or via bicycle, or co-ride, some will take a scooter, a small car, a red speedy car, some might even cut off pedestrians or run red lights to make up time. The point of this is that each one of us will make their own personal decisions in their mind and then execute them physically via their body using whatever mode of transport in a way that corresponds with their mind’s thought pattern.

What is being described here is a two-pronged universal inclination—the sole propensity of humankind—mind think, body do.

The transport to a rendezvous analogy is one of thousands we could use. But the mind functioning process is universal, not only touching each and every human being but also the day-to-day decisions we are obliged to make. This course of action is illustrated by our two-pronged process:

First the mind goes into action, and only then does the body implement the thought. This is mind over body.

Insofar as the idea is correct and is followed by correct implementation, the result will be peace and prosperity. If the idea is wrong—a bomb and its wrong use—the implementation may be correct, but the result will be destruction; the opposite of peace and prosperity. This is the mind over body equation humans—and only humans—battle with on a daily basis.

In this section on how humans work we discuss this and one point in particular that we want to clarify right here. When it comes to solving problems—obtaining peace and prosperity:

In our above example of someone realizing they’re late for an appointment and stepping on the accelerator. To keep speeds as safe as possible, humankind—99% of the time—will ‘control the speed’—a ‘bodily/physical’ function with speed limits. There’s a law and signs along the roads that tell you what speed you should not exceed.

What is rarely addressed is the problem of the realization that you’re late or traffic safety of other—lateness being the real cause of the problem and safety being one of the peace and prosperity motivations—both of which are thinking or mind functions.

Yes, there are road safety campaigns appealing to the thinking-mind but most of them appeal to the body by referring to the consequences of injury and death, similar to what we do with cigarette packages by putting images of wracked up lungs and cancer to dissuade users. Those are watch out for your own body statements rather than think about what you’re really doing to bring peace and harmony to your and your fellow-person’s body.

This distinction between the levels at which humankind functions might not seem important, and I agree, not much emphasis is placed on it, but it is capital to distinguish between them:

Galacti is noticeably aware that Sam is not using the term brain level because the brain is part of the body—but rather mind level because that is where we think and reason. As well as understanding that humankind puts the emphasis of how humans function on the body level—the secondary level, rather than the mind level—the primary level. It should be mind over body, but we fall back to body over mind.

Thoughts—whether true or not, whether valid or not—about each one of our perceived desires, wants and needs, color the way we treat ourselves as well as the way we treat others and others treat us. These thoughts—whether expressed or unexpressed, whether understood or misunderstood—can and often do control our minds, do incite and motivate us into certain actions—both positive and negative.

Within this very complex ‘mind equation’ which each of us modifies, second by second—based on our personal inner feeling coupled with outside influences—lies the source of peace and prosperity and/or fighting and poverty.

Let’s take a closer look at the details of this seven-step process, the deep inner functioning of humans. What is going on in our human mind and how humans are expressing this via their body—this is the crux of the matter.

This blog post is an excerpt from chapter 2.2 of Audit of Humankind.

Since you read all the way to here… you liked it. Please use the Social Network links just below to share this information from The Explanation, Mind over Body, Why we Keep-or not-New Year’s Resolutions