Incredible Soil, not Dirty Dirt, Involved in Every Activity on Earth 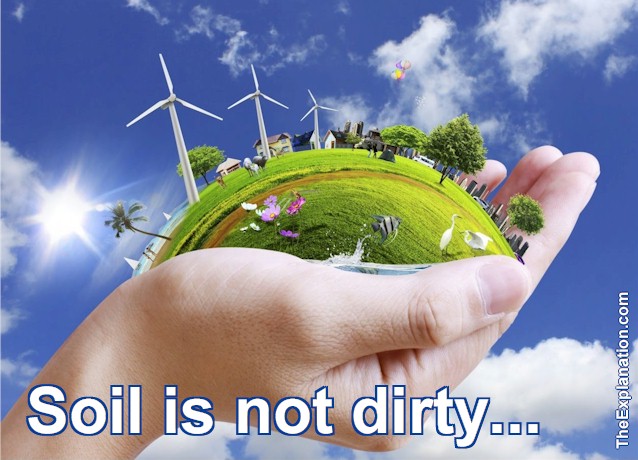 On Earth, our daily lives involve Soil. When we work, sleep, eat, and play—it’s an important part of the cosmic puzzle. On Earth, soil is not just dirty dirt. It’s an important piece of the cosmic puzzle.

The dirt shifts under our feet as we walk through the forest, where Galacti has conducted us. However, Galacti doesn’t mean for us to linger here for long. He promises that we will return once we have explored the flora on our Earth. “Come on then, there’s more to see,” he shouts.
(Inventory of the Universe, chapter 4.1-2)

We hike, following our trusted tour guide. It’s a breathtaking trek out of the woods and into a dirt field. Is this the next piece in our universal jigsaw puzzle? What does pure dirt have to do with the cosmic tableau? It is, after all, dirt: It is loose, with tiny grains and pebbles. It’s in our gardens, including rooftop container gardens, if we live in the city. Dirt, we think, is everywhere. It is nothing extraordinary, unless you are a child.

Despite our questioning minds, this field of dirt is strangely mesmerizing. We have the urge to take off our shoes and stick our feet in the dirt as we contemplate a few more pieces of the cosmic mosaic.

Why is Earth, to our knowledge, the only planet with soil we can actually dig our hands and feet into? How is it that our Earth can produce such a wide variety of foodstuffs? In fact, agriculture is responsible for close to 40 percent of all employment worldwide.

Why are there so many uninhabitable planets with “land” that won’t support us?

Galacti pulls up the card catalog of the universe in digital format and shows us the many books (some of which are mentioned in the bibliography and on our website) that have been written about these and hundreds of other similar questions.

As your other host, I pause to add that you can also submit articles and references to documents about these wonders of the world—these systems and paradoxes that should make us stop, at least for a second or two and raise our minds to another dimension at http://www.TheExplanation.com “They’re already following our adventures, Sam,” Galacti says.

“I know. But the goal of our story is to immerse all of you into the grandioseness of these inanimate marvels,” I say as I turn to the travelers. “It’s a prologue and preparation for The Explanation of what we’re doing on Earth. We humans are not isolated. We’re on a planet that is part of a solar system that is part of a galaxy that is part of the universe.”

The travelers and Galacti are considering this and reflecting on where we are in the universe. We can’t understand what we’re up to if we don’t grasp who we are and where we fit in the jigsaw puzzle, or as one of our fellow travelers puts it, “Who am I? Who are we? How did we get here? What’s our purpose? What are we accomplishing here? Where is this stage of ‘man on Earth’ heading? Is it just ‘a stage?’ Is that all there is, if anything? What’s the point?”

“For the moment, just enjoy the soil,” Galacti says. “Perfect growing conditions. It’s tailor made. And I can honestly say that I haven’t found any cocoon while traveling in all the vastness of the universe that approximates even 0.000001 percent of the physical marvels you have on Earth that sustain your lives. I’m sure there is going to be an Explanation for this.”

“For now, Galacti is right. Let’s dig in the dirt,” I say, and then I step out of the way in time to avoid a spacecraft-like drill that skillfully penetrates the soil of our Earth’s crust.

Our Earth is often compared to an apple, with the thinness of the skin representing the volume of Earth’s surface crust. However, as the drill burrows into the “apple,” we can also compare the crust to the skin that forms on boiled milk as it cools down, even though the layers of dirt are dark.

This is because below Earth’s stable but skin-thin crust, which has a thickness of approximately five to seventy kilometers, is the mantle. The mantle is 3,000 kilometers thick. It is a hot, viscous amalgam of rock that surrounds a boiling outer liquid core, like liquid “milk” lava, 2,000 kilometers thick, with a temperature of 3,000 degrees Celsius.

Unlike the Earth’s core, its “skin” supports life in the form of plants, animals, and the soil bacteria Galacti examines under a powerful microscope. The soles of our bare feet on the Earth make us realize that this temperature is just right for water to flow, worms to squirm, animals to burrow, seeds to germinate, roots to absorb, and for man’s agricultural and other activities.

With all the interplanetary orbiting and the solar, stellar, and seasonal activity, average land temperatures vary very little and have been in a range that have supported life for millions of years.

The dirt we’re standing in is not just for our current explorations. Land has numerous purposes. Listen to passengers clap when their plane touches down after a flight. They appreciate terra firma. We speak of being “grounded” and “down to Earth,” that is, reliable and mature.

Our daily lives involve Earth when we work, sleep, eat, and play. Whether we’re manufacturing or providing a service, sleeping in our bedrooms, camping in a yurt, cooking dinner at home, feasting out, bowling, sailing, or studying, all our activities are directly related to our Earth.

Our digital library of the universe shows us an image of various areas on the planet. We can see that although about one-fourth of Earth’s surface is land, only about one-tenth of this land area can be used for arable and grazing purposes.

One of our travelers picks an apple from the forest to demonstrate the nature of land. She cuts the apple in half and one piece in half again. Three-fourths of the apple represents our Earth’s water, while one-fourth represents the land. Divide the land apple in three parts.

The first corresponds to non-arable land areas—deserts, swamps, and cities—and the second designates the forests. Cut the third piece in four. Three of those pieces represent pastures and meadows. The final silver represents arable land for annual crops and permanent orchards (some fourteen million square kilometers). That’s about the area of Canada, Alaska, and Mexico combined, and that’s the land available to grow all of mankind’s foodstuffs.

As the traveler shares the apple with a few people who are still hungry, she notes that one of the similarly sized slivers represents the entirety of the land habitable by the world population. It’s literally food for thought.

This post is an excerpt from chapter 4.1-2 of Inventory of the Universe.

Stick your feet and mind deep into soil.


Dig Deeper into The Explanation

Since you read all the way to here… you liked it. Please use the Social Network links just below to share this information from The Explanation, Incredible Soil, not Dirty Dirt, Involved in Every Activity on Earth