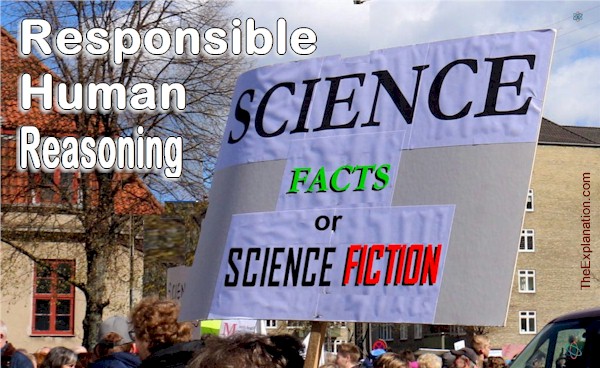 Science facts or science fiction. There’s a clear line between the two. But, how clear is it to human reasoning?

Science facts give stability to one’s worldview. Science facts are pillars you can lean on solidly. They are comforting in an unstable world. Science was my favorite subject in school. In my late teens, I moved to Israel with the idea of attending Hebrew University to pursue studies in maths and science. For different reasons that didn’t happen. In fact, my life trajectory changed radically. However, a quality that I think characterizes scientists always remains. That of curiosity.
(Audit of Humankind, chapter 5.9)

Wanting answers to questions. And it seems the deeper you go, the more questions you have. The quest of science to give intellectual viable answers to all aspects of our Universe is truly a mind-boggling undertaking. It is the 21st century’s prime method of human reasoning. For 1900 years religion and its ideas inundated the world with concepts of the Universe, Earth, and Life.

Then starting in the 19th century and subsequently, science began to get the upper hand in how humans reason about their environment. The famous Scopes Monkey Trial in 1925 revolved around whether evolution, in the name of science, should be taught in school or not. Religion and the Bible were on trial. They lost, and although the verdict was overturned, science was at the start of its heyday.

Millions of scientists work worldwide to push the frontier of knowledge forward. I have no doubt that even more progress will be made. Getting into quantum physics has blown away most of the classroom science I went through as a youngster. But this vast new arena of the particle-wave explanation of matter opens us up to some huge challenges as to what are science facts and what is science fiction.

Like in so many fields lying and cheating can be prevalent. This is the first level. It isn’t really science fiction, it’s simply a distortion of science facts. Jennifer Byrne writes in Nature magazine.

Scientists are increasingly talking about the swelling research literature and its contamination by incorrect research results. Dubiously produced papers are getting published.

Most of the talk centers on unconscious bias and ill-informed sloppiness; conversations about intentional deception are more difficult. Informatician Cyril Labbé at Grenoble Alps University in France and I have developed a tool, Seek & Blastn (go.nature.com/2hsk06q), to identify such papers on the basis of wrongly identified nucleotide sequences. So far, our work has uncovered dozens of papers and resulted in 17 retractions, with several investigations pending.

As Byrne points out, these fraudulent results that claim to find causes or real diseases like cancer could serve as a basis for further research. This would waste money effort and hope.

The scientific method is based on rigorously proven scientific facts. Factual accuracy should go hand-in-hand with science. Unfortunately, that is not the case. There are a few science writers that I read, for one particular reason, their honesty. One such author is Dr. Jon Lieff. He maintained a blog for five years and is now writing a book about the whereabouts of the mind.

In a blog post about human evolution he wrote this:

Unproven genetic theories are frequently offered to the media about complex human traits such as intelligence and its relation to specific genes. There are negative racial theories that are falsely based on genetic variations. Genetic theories related to complex human behavior have not been proven. A previous post on genetic studies related to psychiatric illness demonstrated just how complex it is to find genetic answers for human behavior and mental illnesses.

If there are genetic answers, they involve a very large number of interacting genes, regulatory RNAs and epigenetic tags that are beyond current research. Please see the post on Genetics of Psychiatric illness for details.

In this last chapter about how humans reason, I’ve referred to the misinterpretation of human experiences, philosophy, and especially spiritual philosophy. Presenting science fiction (and I don’t mean novels that are obviously intended to be for entertainment) as science facts is not only misleading but disruptive. This kind of aberrant human reasoning instills in well-believing minds a sense of dependency that science will take care of all our ills.

In a February 2018 article in the Scientific American, John Horgan interviewed physicist Marcelo Gleiser who muses over the paradoxes of scientific progress.

Gleiser: Yes, actually, quite a few. For example, claims that we understand the big bang, the event that marked the origin of the universe. We most certainly do not, and I go further to claim that we cannot, given the way science depends on a conceptual framework to operate. Science can give at most an incomplete answer to the question of the origin of everything, one that depends on notions such as space, time, energy, laws of nature…

Another one is the claim that we “live in a multiverse.” We have no clue if a multiverse exists or not, and, worse, we wouldn’t be able to know either way. Science popularizers often get carried away and present ideas that are grounded on speculation as a done deal. We must be very careful with that, especially in a time when science’s credibility is constantly under attack. Scientists don’t want to be the ones who undermine science’s credibility, presenting speculative ideas as confirmed scientific facts!

I’m giving you quite a number of quotes in this post because I want you to read about what open-minded scientists in the field of gathering science facts have to say. This is not Sam Kneller or The Explanation trying to infer negativism or get a jaded view of science across. These are real scientists talking about their colleagues.

John Horgan, in his book End of Science, reports attending a symposium at Columbia University in which philosophers and physicists discussed the meaning of quantum mechanics.

But for the most part each speaker seemed to have arrived at a private understanding of quantum mechanics, couched in idiosyncratic language; no one seemed to understand, let alone agree with, anyone else.

When I [John Horgan] revealed my impression of confusion and dissonance to one of the attendees, he reassured me that my perception was accurate. “It’s a mess,” he said of the conference. The problem, he noted, arose because, for the most part, the different interpretations of quantum mechanics cannot be empirically distinguished from one another; philosophers and physicists favor one interpretation over another for … subjective reasons.

“Subjective reasons.” the total opposite of science facts. This is human reasoning. Most people end up reasoning subjectively, based on their feelings. Today numerous schools of thought propound the idea that you should follow your gut. Well, there is certainly a place for instinct and subjective decision making but it is not in the realm of science facts.

John Horgan’s book is replete with examples of this contradictory perversion, exaggeration, and speculation based on supposed science facts. He has even coined a term for this, ironic science. Talking about Hawking’s book Brief History about cosmology, Horgan analyzes.

I suspect that Hawking–who may be less a truth seeker than an artist, an illusionist, a cosmic joker–knew all along that finding and empirically validating a unified theory would be extremely difficult, even impossible. He declaration that physics was on the verge of finding The Answer may well have been an ironic statement, less an assertion than a provocation. In 1994, he admitted a much when he told an interviewer that physics might never achieve a final theory after all. Hawking is a master practitioner of ironic physics and cosmology.

Ironic science will continue. Hawking’s and other’s visions are both humbling, that they show the limited scope of our empirical knowledge, and exhilarating, since they also testify to the limitless of human imagingation. At its best, ironic cosmology can keep us awestruck. But it is not science.

I think a certain number of people are truth seekers. Unabashedly I’d say The Explanation falls in that category. And it will be offering you answers that are based on scientific facts, but not only. There are other facts which you are going to discover as we look for The Answer or The Explanation.

Additional statements of scientists contradicting one another.
John Horgan and Jim Holt on Science Saturday

This blog post is an excerpt from chapter 5.9 of Audit of Humankind.

Since you read all the way to here… you liked it. Please use the Social Network links just below to share this information from The Explanation, Science Facts or Fiction, Vital For Human Reasoning